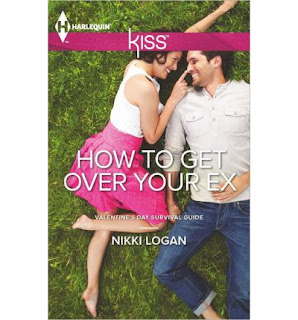 I haven't done a Harlequin roundup for ages and given we've just had Valentine's Day, it seemed like a nice opportunity to review a couple of category romances that I've recently really enjoyed.

The first one is a real charmer from an author I hadn't read before. Nikki Logan happens to be the current president of Romance Writers of Australia and I've met her many times. I even did a crit on the start of a romantic suspense that she'd written before she was published. But I'd never read one of her Harlequins until I picked up HOW TO GET OVER YOUR EX (January 2013), one of the new Harlequin Kiss line.

Poor Georgia Stone! She proposes to long-time boyfriend Daniel over the air as part of a radio station's Valentine's Day promotion. And he knocks her back. Ouch! Station manager Zander Rush decides to rescue this stunt gone wrong by instituting something called "The Year of Georgia" where he escorts Georgia to a whole range of new experiences including a makeover and a trip to Turkey. Georgia gradually comes to realize that, despite Daniel's rejection, there actually wasn't anything wrong with her in the first place and she doesn't need to become a new person. Through sharing all these experiences and getting to know Georgia, Zander realizes that he has taken a few wrong turns in his life. I love a romance where the hero and heroine grow into more fulfilled, better people at the end, and that's the case here. I smiled the whole way through this lovely book! 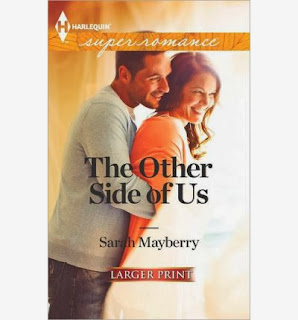 My next selection is also by an Aussie author, the fabulous Sarah Mayberry. THE OTHER SIDE OF US (SuperRomance, January 2013) revisits a familiar theme from Sarah's work about how sometimes life's unexpected turns can at first seem a catastrophe but in the end, become opportunities for growth and fulfillment.

Mackenzie Williams is the sort of woman who makes most workaholics look like complete slackers. She's achieved major success as the producer of a television drama when she has a horrific car crash on the way to a location shoot. When we meet her, Mackenzie is holed up in her beach house on the Mornington Peninsula near Melbourne after a 12 month convalescence. She's angry and bitter and worried that she might lose her place in the dog eat dog world of television production. She's also pushing her body beyond where she should in her attempt to return to the woman she was before her accident.

Oliver Barrett, ex rock muso and current music producer, has just discovered that his wife of six years has been cheating on him the whole time with her ex. Devastated, angry, confused, he retreats to a beach house he inherited with the idea of taking a few weeks to sort through his late aunt's possessions and preparing the house for sale. Guess who's next door? Yup, prickly, difficult, intriguing Mackenzie. These two have a rocky road to romance, with quite a few hairpin bends relating to their baggage. But in typical Sarah Mayberry style, they're wonderful, complex, interesting characters who leap breathing and arguing and loving from the pages. Highly recommended! 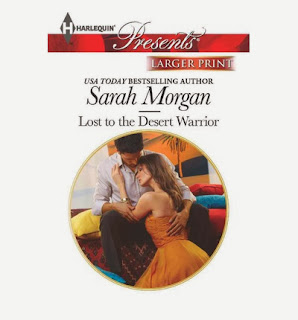 My last book for this roundup is prodigious talent Sarah Morgan's sexy and intense LOST TO THE DESERT WARRIOR (Harlequin Presents, September 2013). I love Sarah's books - don't miss her first single title SLEIGH BELLS IN THE SNOW that came out last October. I love how Sarah takes the classic Presents style - the alpha hero, the glamor, the drama, the high stakes emotions - and makes it completely her own. It's no accident that she's won the RITA award two years in a row for best short category romance!

Princess Layla's only hope of escaping an odious arranged marriage is to flee into the desert in search of the true heir to Tazkhan's throne, Sheikh Raz Al Zahki, and propose herself as his bride. The problem is that Raz has lost a beloved wife to Layla's evil family's machinations and he's sworn never to wed again. Not to mention he's convinced that Layla is just a chip off the old rotten block of her father and cousin.

I love marriage of convenience stories and this one's a doozy! Raz is wonderful: brooding and grieving, but passionate, wise and kind. Sigh. Layla is a fantastic character. She's spent her life learning things from books so she's got all this arcane knowledge rattling around in her head, knowledge that proves of very little use when it comes to managing the man she rapidly falls head over heels in love with. This one's very much a fairytale, romantic and fun and steamy.

So have you read any good Harlequins lately?
Posted by Anna Campbell at 12:00 AM

Email ThisBlogThis!Share to TwitterShare to FacebookShare to Pinterest
Labels: Anna Campbell, Category Romance, Contemporary Romance, Harlequin, How to Get Over Your Ex, Lost to the Desert Warrior, Nikki Logan, Reviews, Sarah Mayberry, Sarah Morgan, Second Helping, The Other Side of Us