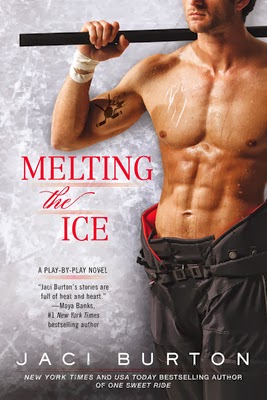 Jaci Burton’s Play-By-Play books have quickly become one of my favorite contemporary series. They feature gorgeous, sports-playing heroes and strong, self-reliant heroines who enjoy lots of hot lovemaking. And let’s face it; these books have some of the best covers in romance! But they are more than just drool-worthy covers...they have a lot of heart.

Carolina Preston and Drew Hogan share a past—the two had a hot one-night stand in college. finally got up the nerve to act on her long-time crush on her brother’s best friend at the time of his graduation...and then she didn’t hear from Drew for a very long time. Feeling hurt and embarrassed, held a grudge for years. Now, she is about to embark on her life-long dream of launching her own design company. She enlists the help of her brother, Gray (One Sweet Ride), a top-rated race car driver and owner of Preston Racing, to model some of her designs for the upcoming Fashion Week. Naturally, Gray agrees and suggests she recruit Drew, too. Because of their history, Carolina is reluctant to ask Drew but is desperate to make her budding company a success. Ultimately, desperation wins out over reluctance.

Drew Hogan does not hesitate when Gray and ask him to help. Despite what thinks of him, Drew had not forgotten that long ago night they shared in college. At the time, he wasn’t ready for anything serious. He wasn’t ready to deal with the strong feelings she evoked in him. He had a promising hockey career ahead of him and had to concentrate on that. But now that he has stability in his life and is a successful pro hockey player, he is ready to try to win ’s heart. She proves to be difficult in that respect but Drew is nothing if not persistent.

I love Melting the Ice! I adore stories where the hero is in love with his best friend’s sister (and vice versa) and Drew and are so likable, so engaging, and so perfect for each other. They both work hard in their respective vocations (I would even go as far as calling a workaholic), so it’s no surprise that they work hard to overcome their rocky history and take a second chance at love. This passage from when they visit ’s family during Christmas and attend church on Christmas Day sums it up wonderfully.

...they listened to the minister talk about new beginnings.

A lot like and him. Their relationship had started out as a disaster, and she’s harbored a grudge for a long time. But the ice between then had slowly been melting. So maybe this was a new beginning for them.

Fans of the series will love catching up with Gray and Evelyn, and if the excerpt from the next book (Straddling the Line) is any indication, we will be in for a treat with Trevor’s story! It releases in July and promises to be an emotional one. Melting the Ice is a great addition to ’s Play-By-Play series and a super spicy contemporary that I highly recommend!