Review - - The Trouble with Honor 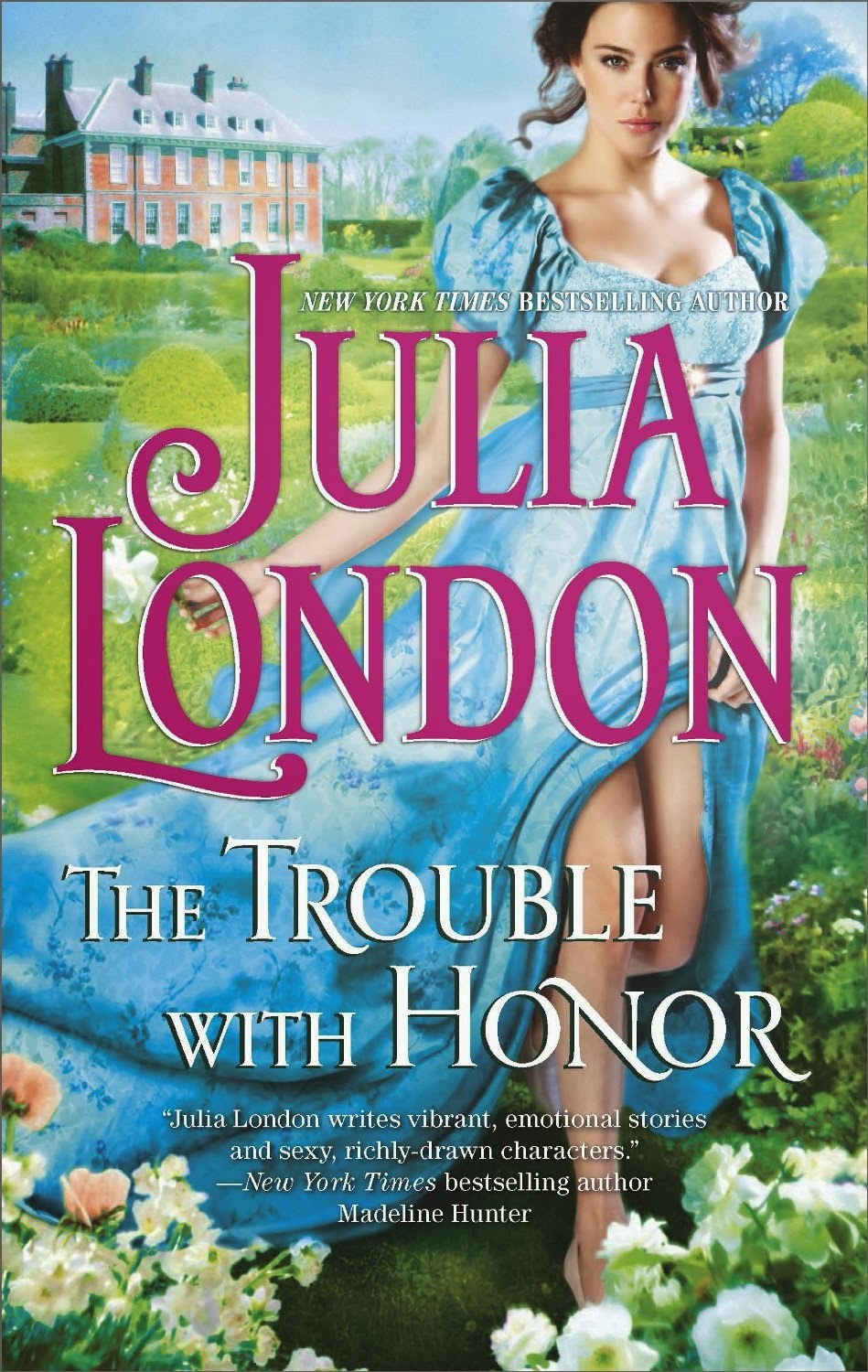 Honor Cabot and her three sisters benefited socially and financially from their widowed mother’s marriage to the wealthy and indulgent Earl of Beckington. But the earl is near death, her mother is showing alarming signs of mental illness, and the earl’s heir will soon marry Monica Hargrove, Honor’s former friend and present enemy. Augustine may be fond of his step-sisters, but Honor knows that once he is the earl and Monica is his countess, there will be no room in the Beckington London house or at Longmeadow, the family’s country estate for a madwoman and her four daughters. As the eldest, Honor feels compelled to take care of her family. But she needs time, time to find a husband that she can love and who will also be wealthy enough to provide for her mother and sisters. In order to gain time, she must stop Augustine’s wedding, and a recent acquaintance is just the person she needs to help her.

George Easton is the illegitimate son of a maid and a royal duke. Although the duke never acknowledged George, George’s mother, by means unknown to George, secured a stipend from his father that provided an upper-class education for her son, but George remains on the fringes of polite society, ignored by the sticklers and tolerated within limits by the more liberal. His own efforts and skill in speculation won him a fortune, but he has a habit of losing fortunes more easily than he gains them. He also has a reputation for his way with women and his skill with games of chance. George bears some scars from his bastard status, but he harbors no illusions about his social status.

In the ordinary course of events, Honor and George would never have met, but Honor enjoys flouting society’s rules. One winter evening, in the company of a few other daring debutantes and young gentlemen, Honor visits the latest fashionable gaming hell and wins a hundred pounds from George, to everyone’s amazement but her own. Honor remembers George’s looks, his fortune, and his reputation for charming the ladies when she hits upon the idea of Monica’s being seduced away from Augustine. George has no intention of agreeing to take part in the scheme, but he finds it impossible to resist Honor’s unique combination of beauty and daring. He also understands her desire to take care of her mother. Neither Honor nor George is prepared for the spark of attraction between them to become a conflagration that threatens life as they know it and promises something of which they have barely dreamed.

I’ve been reading Julia London’s books, historicals and contemporaries, with pleasure for the past decade, and I was pleased when I learned that she was introducing a new historical series with The Trouble with Honor. When I read a London historical romance, I expect a combination of the traditional and the unconventional. Often the unconventional is a primary character who is less than likeable but whose clear motivation and intriguing complexities win me over even when I begin by disliking him/her.  The Trouble with Honor has the unconventional character, but this time the character never fully overcame my initial reservations.

I did like George. The dissolute hero with an unfair share of charm and his own sense of honor is a familiar type to romance readers, but London gives George the dimensions to make him a strikingly individual character. He won my heart, as I want the hero to do.  Readers who like their romances with abundant sizzle will be delighted with the passion between George and Honor. But Honor inspired mixed reactions in me. On the one hand, her plight effectively demonstrates the limited options open to women, and I fully sympathize with her frustration over those limitations. But at times she came across as just silly and shallow. Frankly, in the battle with Monica, my sympathies were often with Monica. Because London allows her reader access to Monica’s point of view, it is difficult to ever see her as the manipulative bitch she is in Honor’s estimation.

I also never understood why the earl’s death leaves Honor and her family in such straits. He is a man of great wealth. I’m no expert on nineteenth-century British history, but I thought the widow was provided for according to law and that the provision usually included a dower house. It also seemed logical to me that so loving and indulgent a parent as the earl would have provided for his stepdaughters.  Also, one of the key scenes that some readers may find romantic just made me cringe. (I’m being vague to avoid spoilers.)


Final analysis: The Trouble with Honor is an interesting book, one that I found difficult to put down once I began it. I love George, and the relationship among the four sisters was realistic and endearing. The concerns about their mother’s disintegration added particular poignancy in an era when mental illness was feared and treatment was inhumane. However, the trouble I had with Honor and her situation was not resolved by the HEA, and this book will not be one of my favorite Julia London titles. Nevertheless, I am captivated enough to return for The Fall of Grace, Book 2 in the series set for release on July 29, 2014.