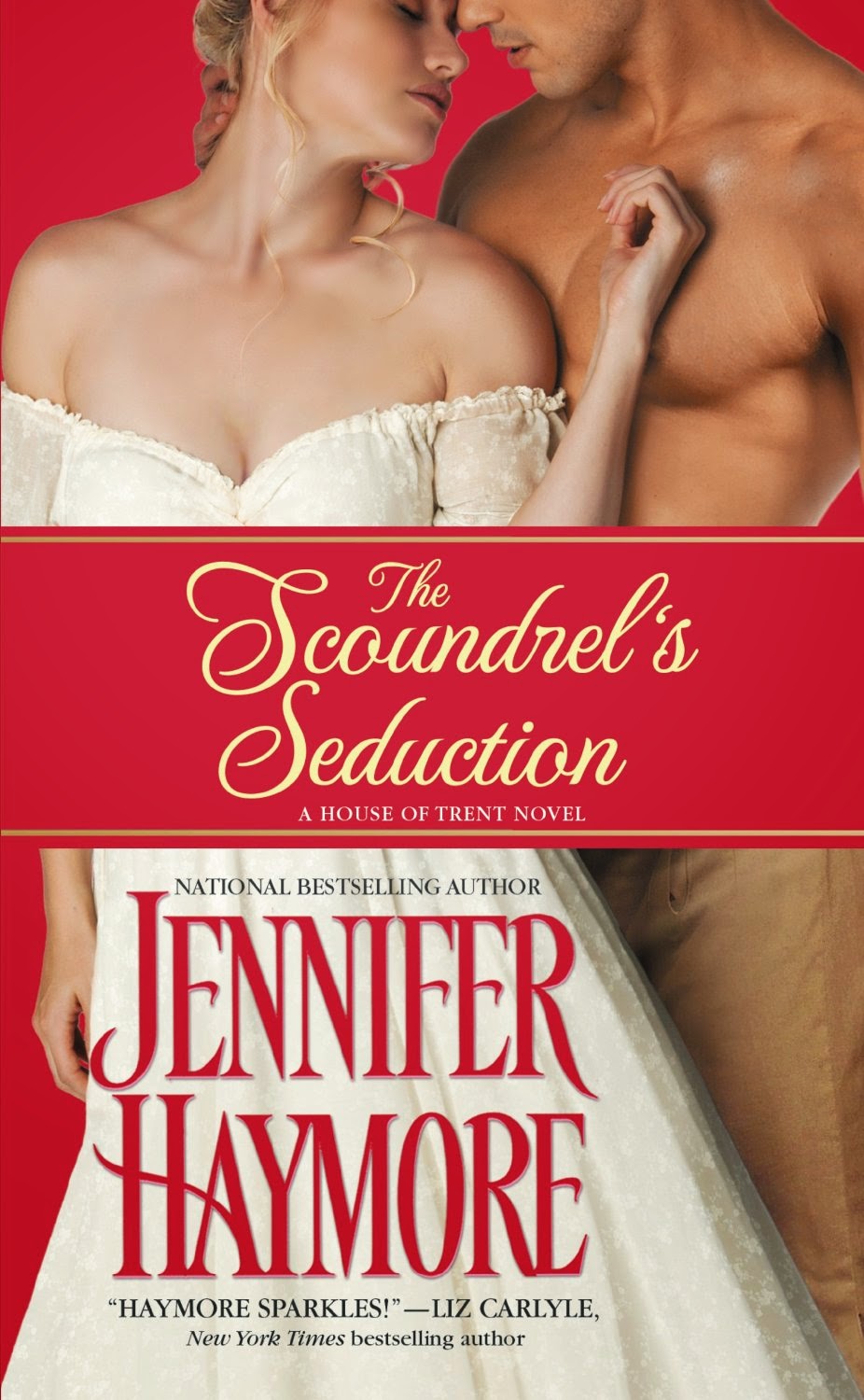 I’m a reader.  Always have been.   I’m the sort who sneaks out to lunch without telling my friends so I can read instead of chat.   I’m the one who lets the phone ring till I finish a sentence.   I’m the one who ignores the “Mo-om!” from downstairs so I can finish the chapter.   But whenever any task, even one you adore, becomes obligatory, much of the joy is sucked right out.

Not so, if one “has to” read Jennifer Haymore’s THE SCOUNDREL’S SEDUCTION for a review site, for example.   ;)

Nobody in Sam Hawkins’ family knows what he does for a living, but they know it’s dangerous.  And vitally important to England.  So when the order comes from the higher-ups asking Sam to assassinate a traitor, he doesn’t hesitate.  Because he’s that devoted to his job and is that good at it.  Except this time, when he shoots the traitor right through the heart, he fails to realize he’s done so while the traitor’s stunning wife watches from under a table.   Unsure of what to do, because killing an innocent witness isn’t part of Sam’s job description, he takes her prisoner.  But with more time spent in her company, Sam isn’t quite sure who has trapped whom for he finds leaving her presence, even for a moment, becomes unbearable to him--to HIM: a man who’s set his life up in such a way as to not attach to anyone.

Now that Élise, Lady Dunthorpe, is finally free of her terrible husband, she can’t abide becoming imprisoned by yet another man so soon after--and by one who ruthlessly shot her husband, no less.  Surely, she should hate her powerful jailer.  Surely, she shouldn’t feel so alive under his intense scrutiny and, most surely, she shouldn’t enjoy his touch.  That would be the moral response, wouldn’t it?   But while Élise wars with what she shouldn't, yet does, feel, danger from her former husband’s associates forces Sam and her to run, perhaps closer into each other’s arms.   Shoulds be damned.
Confession: THE SCOUNDREL’S SEDUCTION was my first Haymore read.  As a writer, I found her to weave quite a complex relationship between her main characters, far more weighty than the average historical.   But I think what put this book into the 5 star category for me is the chemistry Haymore is able to create.   Sometimes I feel chemistry between the hero/heroine is a fluke for writers, just as it is in life.  It’s there or it isn’t, even in the hands of the very best writers.

It was certainly there between Sam and Élise and the jailer/prisoner plot helped.  But Haymore does something different with it: while her heroine, Élise, craves her freedom, Haymore writes her without a hint of shrewishness, though she is still independent and worthy of a reader’s respect.   And while her hero, Sam, is powerful and is forced to imprison Élise, Haymore writes him without a hint of pushy chauvinism… though he is still incredibly male and virile AND sensitive.   They are all fine lines for a writer to traverse and Haymore does so expertly.

I heartily recommend THE SCOUNDREL’S SEDUCTION.  And while I feel the title is a misnomer of sorts—the title and premise set up different expectations than what a reader actually gets with this book (Élise doesn’t actively seduce Sam out of his wits as she is just as seduced by him)—the book FAR exceeded my enjoyment expectations… especially my “have to read it” enjoyment expectation.

Go forth and read THE SCOUNDREL’S SEDUCTION while I download all of Haymore's other House of Trent novels.  Because I have to.

J Perry Stone is an aspiring Historical Romance writer who is a giant proponent of books and of love... romance being the place where the two live happily ever after.  She lives in Charlotte, NC with her husband and two children.