Review - - When a Laird Takes a Lady 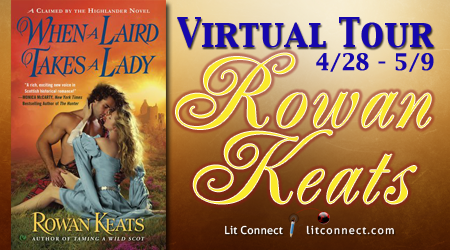 When a Laird Takes a Lady
Claimed by the Highlander - Book 2
By Rowan Keats
Publisher: Signet Eclipse
Release Date:  May 6, 2014 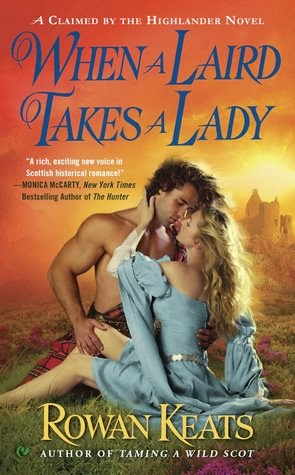 Life has not been easy on Isabail Grant.  Growing up motherless and with an abusive father, the only family to whom she was close was her beloved brother.  But her brother, a courier for the king, has been murdered by Aiden MacCurran and now Isabail is alone. The king has confiscated the MacCurran lands and Isabail is on her way to petition him to grant the property to her in recompense for her brother's death when she's taken captive...by MacCurran himself.

Laird of his small clan, Aiden MacCurran is a man of loyalty, integrity and desperation.  Falsely accused of killing the king's courier and stealing a valuable necklace, Aiden has been declared an outlaw and the members of his clan have been turned out of their homes and forced to live hidden in the woods.  Aiden has mere days to clear his name and find the missing necklace before the MacCurran property is lost to them forever and his clan is scattered to the winds. His only hope is convincing Isabail Grant to tell him the names of the men at the castle the night her brother was killed as he's certain one of them must be the real killer.  It would be too much to hope that the lass would come willingly.

Isabail, as she has been taught by life, expects the worst type of treatment from Aiden and his men and is surprised when instead she's treated with care and respect.  During her time at the MacCurran camp, the flicker of attraction between the two grows into a flame but desire does not equal trust...on either side...and a battle of wills ensues. Slowly, though, each begins to see that the other is more than they initially thought and Isabail starts to question her belief that Aiden truly is the man who murdered her brother.  But when the opportunity to escape presents itself, will she trust the logic of her mind or the whispers of her heart?

As with her debut book, Taming a Wild Scot, Keats thrusts the reader into the heart of medieval Scotland, complete with alpha heroes, strong-minded women, political intrigues and plenty of action.  Her books flow smoothly, with both a story that reels the reader in and holds their attention and complex, intriguing characters who touch the heart.  When a Laird Takes a Lady begins shortly after the end of the story in Taming a Wild Scot.  While the primary romance in each of the books is brought to a conclusion in that book, the mystery of who stole the necklace is a story arc that continues across the series.  Therefore, while When a Laird Takes a Lady can be read as a stand-alone, I believe readers will have a more complete understanding of both the events leading up to Isabail's kidnapping as well as the actions of Isabail, Aiden and other key secondary characters if they read the books in order.

I'm an unabashed fan of medieval historical romance and am delighted to have another author joining the ranks of medieval authors such as Monica McCarty, Sue-Ellen Welfonder and Paula Quinn.  I thoroughly enjoyed When a Laird Takes a Lady and am now counting down the months until Keats takes us back to medieval Scotland with the third book in this series, To Kiss a Kilted Warrior  (Don't you just love that title?) in December, 2014. I'm looking forward to my next visit!


Do you enjoy medieval historical romance?  What do you like/not like about this era? Do you prefer books in this time period that are set in England or Scotland or do you just enjoy a good book, regardless of location?  Have you read Rowan Keat's books yet?


The Rowan Keats Virtual Tour for When a Laird Takes a Lady is giving away eight copies of the book to readers who enter the tour's Rafflecopter giveaway.  (US/Canada only) Good luck to everyone!

Rowan Keats pens historical adventures involving hot Highland heroes and the women they claim. Both TAMING A WILD SCOT and WHEN A LAIRD TAKES A LADY have earned 4 1/2 star reviews from RT Book Reviews, which labelled her "a rising star of medieval romance."
When not writing, Rowan can frequently be found in a dark movie theater indulging in a large bag of popcorn, or watching the sunrise with a mug of steaming coffee wrapped in her hands. She lives in Central Canada with a goofy black lab, a very talkative cat, and a daughter whose own creative talents awe and inspire her every day.