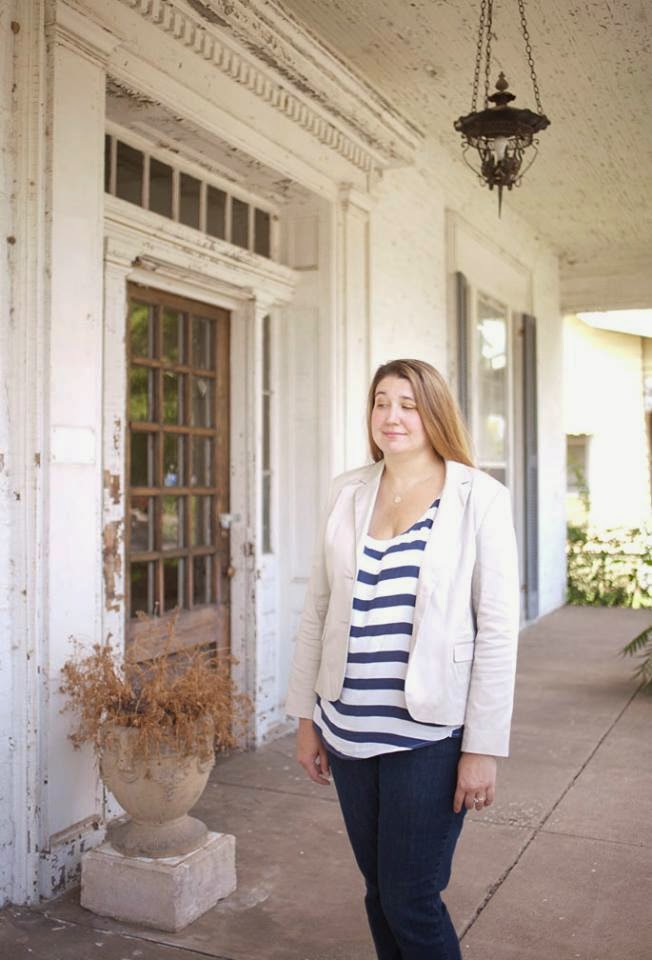 Today, we welcome Molly Harper! Molly has been writing for a long time, setting up her own " writing office" with a manual typewriter in the family living room when she was just eight years old. She then wrote her first story; of a trip around the world with her third-grade class in which a classmate was lost in each city.  I wonder if her classmates ever knew?  She majored in print journalism at Western Kentucky, married her high school sweetheart and eventually turned her talents to writing novels.  Her books range from accidental vampires to naked werewolves to straight contemporary.  Molly joins us today to talk about her newest book, her first haunted house story: BETTER HOMES AND HAUNTINGS.


Hi, Molly! Welcome to the Romance Dish! It’s a pleasure to host you today. Your new book, BETTER HOMES AND HAUNTINGS will be released June 24th. Please share with our readers what they can expect from this book.
This is my first standalone paranormal romance and my first haunted house story, so I am super excited about it!  I spent a lot of time concocting The Crane’s Nest, a Gilded Era mansion that never quite thrived as a family home as Gerald Whitney, the business tycoon who built it was accused of murdering his wife shortly after it was completed. The murder mystery and inevitable stories of hauntings and family curses followed the Whitneys throughout the generations. Deacon Whitney, a social media mogul who has managed to rebuild his fortune, wants to restore the house to its former glory and finally put the supernatural rumors about his family to an end. The team of experts he assembles to remodel the house is contracted to live there over the summer while the work is completed, a measure he had to take after mysterious noises and cold spots chased away previous teams.

Landscaper Nina Linden is hired to rehabilitate the gardens and she sees it as her chance to rebuild her failing business after being cheated by her unscrupulous ex-partner. She never expects that her new client would see more in her than just a green thumb. But Nina shows no signs of being scared away, even as she experiences some unnerving apparitions herself. And as the two of them work closely together to restore the mansion’s faded glory, Deacon realizes that he’s found someone who doesn’t seem to like his fortune more than himself—while Nina may have finally found the one man she can trust with her bruised and battered heart.

But something on the island doesn’t believe in true love…and if Nina and Deacon can’t figure out how to put these angry spirits to rest, their own love doesn’t stand a ghost of a chance.

What inspired you to write a haunted house story? Have you ever had a personal experience with a haunted house?
I have always been fascinated by hauntings, but the backstory of the ghost never really makes me say, “WOW.”  I wanted to write the biggest, twistiest ghost story I could manage and I hope the reader enjoys it.
At first glance, a landscaper and a software mogul seem an unlikely pairing. What is it about Nina and Deacon (love that name, by the way) that convinced you that these two people belong together?
Beyond the face that they’re both intelligent and kind people, interested in a lot of the same things, they’re both nerds in their own way and could be perceived as “Beta” types. But over the course of the story they’re forced to become badasses, chasing down ghosts and nefarious ex-partners and defending each other from the same. They both just needed the “kick start” to bring out their more aggressive nature, and it turns out to be each other.
Will there be more haunted house books in your writing future?
I hope so, I had a really good time writing this one.
You also have a book coming out in September. Will you give us a preview of SNOW FALLING ON BLUEGRASS, the third book in your contemporary Bluegrass series?
The third book in the series features Kelsey Wade, executive assistant extraordinaire to Kentucky Commission on Tourism marketing head Sadie Hutchins.  Sadie and Kelsey have organized the office’s annual planning retreat at a remote lakeside lodge, complete with staff bonding activities and s’mores sessions, only to arrive at the lodge in the middle of the worst ice storm in the state’s history. The ice and snow knocks out power to half of the southeastern United States, closes the roads and generally shuts down life as Kelsey knows it.  Fortunately, the empty lodge - and Luke, the handsome park ranger who runs it - has enough supplies to keep the KCT staff from turning on each other, Donner party-style. Normally, Kelsey wouldn’t mind being trapped with her co-workers, but recent tensions with her office crush, Charlie, have reached the uncomfortable, claustrophobic stage.
The ice storm setting is actually based on my own experiences in the January 2009 ice storm, when I spent two weeks sleeping on a mattress in front of my inlaws fireplace with a four year old and an infant while my husband worked twelve-hour emergency shifts. We didn’t have electricity for twelve days. It got a little intense.
What would readers be surprised to learn about you?
I am a wee bit obsessed with sushi, particularly California and Green Dragon rolls.
I have bruises up and down my arms because my karate class is working with nunchuks and I am TERRIBLE with them.  Even the foam ones.
My husband, David, is my high school sweetheart. We have been together since I was fourteen and he was sixteen. (More than twenty years.)
If you were haunting a house, what type of ghost would you be?
I would like to think I would be the helpful, kindly, lady in white type. But knowing myself and how I will likely die, I would probably be one of those horrible avenging wraiths.
What books are on your reading list this summer?
The Boleyn King by Laura Andersen
Tear You Apart by Megan Hart
Fangs of Anarchy by Dakota Cassidy

Thank you for visiting with us today, Molly.  Would you like to ask our readers a question?

Readers, what is the scariest ghostly "backstory" (reason for haunting) you've ever heard, in life or fiction?

Molly will be giving a signed copy of BETTER HOMES AND HAUNTINGS to one randomly selected person who leaves a comment on today's blog. 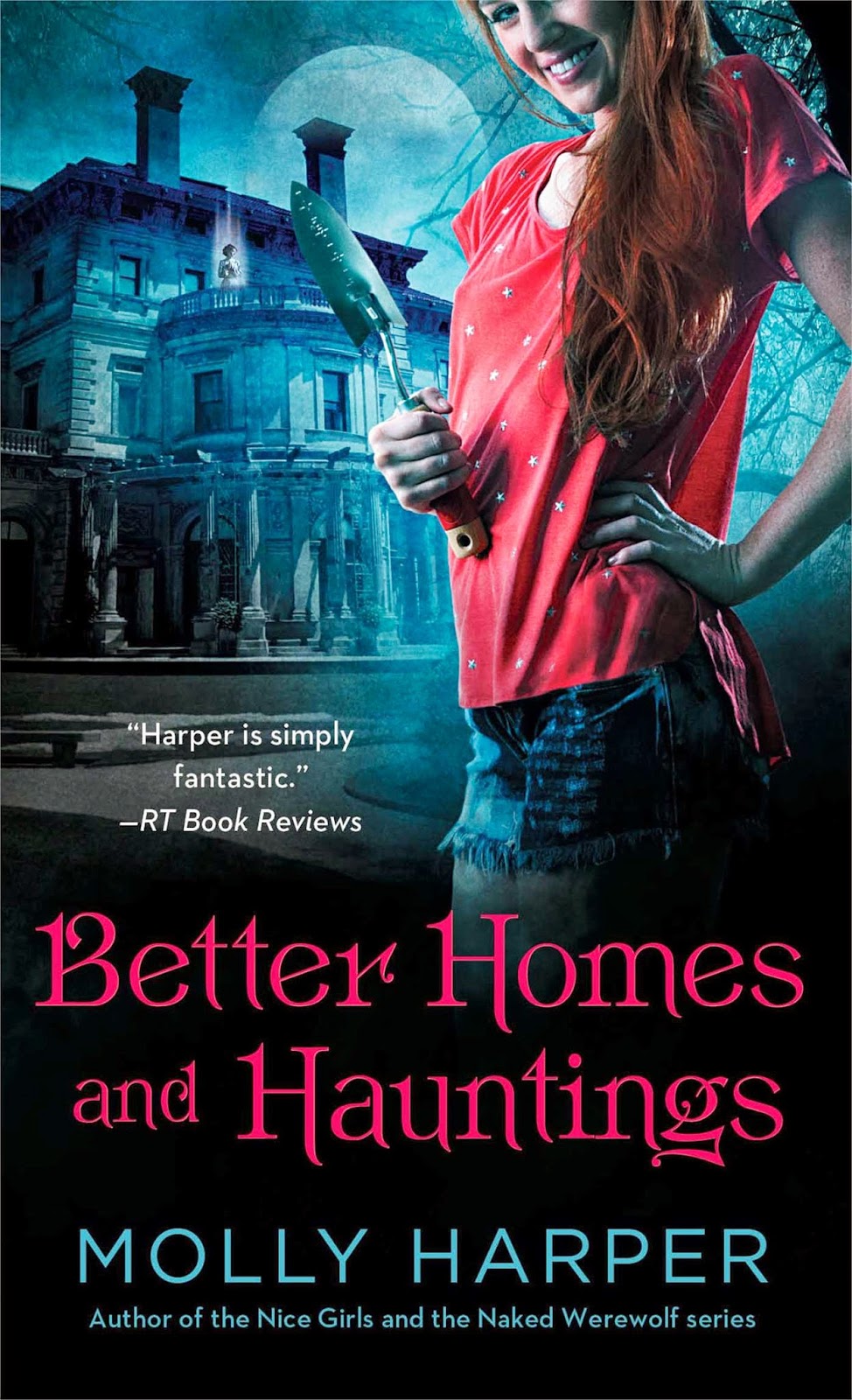 When Nina Linden is hired to landscape a private island off the New England coast, she sees it as her chance to rebuild her failing business after being cheated by her unscrupulous ex. She never expects that her new client, software mogul Deacon Whitney, would see more in her than just a talented gardener. Deacon has paid top dollar to the crews he’s hired to renovate the desolate Whitney estate—he had to, because the bumps, thumps, and unexplained sightings of ghostly figures in nineteenth-century dress are driving workers away faster than he can say “Boo.”
But Nina shows no signs of being scared away, even as she experiences some unnerving apparitions herself. And as the two of them work closely together to restore the mansion’s faded glory, Deacon realizes that he’s found someone who doesn’t seem to like his fortune more than himself—while Nina may have finally found the one man she can trust with her bruised and battered heart.
But something on the island doesn’t believe in true love…and if Nina and Deacon can’t figure out how to put these angry spirits to rest, their own love doesn’t stand a ghost of a chance.