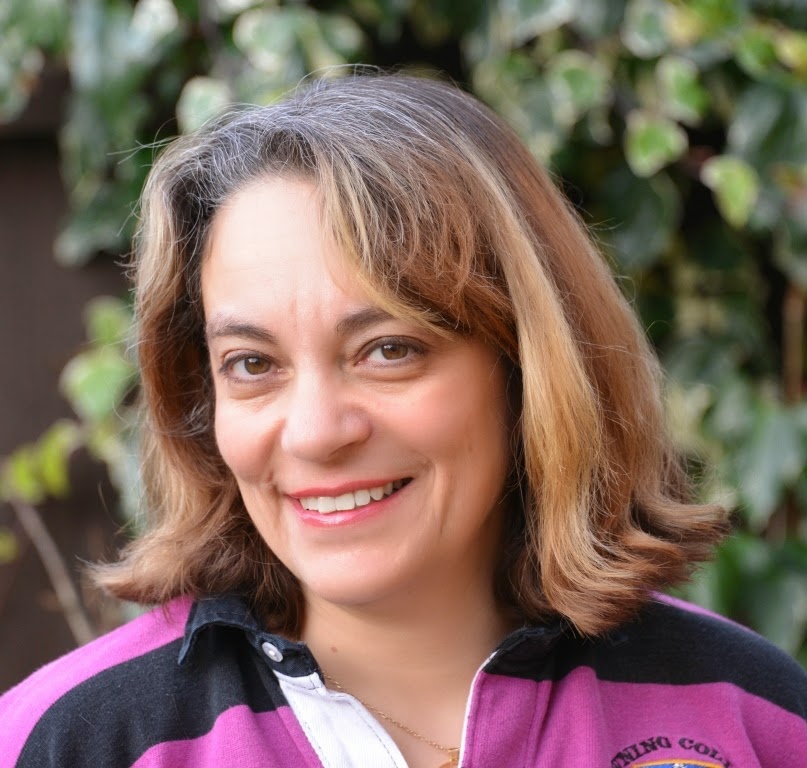 One of my favorite Brits is back today with more hockey hunks, a new book and a terrific giveaway.  I was beyond excited when I discovered that Anna Sugden's debut book would be first in a series revolving around a professional ice hockey team. As soon as I read that book - A Perfect Distraction - I began counting the days until book two was launched into the world.  Sugden's sophomore effort, A Perfect Trade does not disappoint.  Captivating me from beginning to end, this deeply emotional journey snaps, sizzles and refuses to let me go.  I'm still thinking about these characters more than two weeks after finishing their story. Anna recently answered some questions for me about her books and herself.  I hope you enjoy our Q&A!


Hi PJ, and all you Dishy dames! Thank you so much for letting me hang out with you today - it’s great to be back!

Hi Anna!  It's always a pleasure to host you here at TRD.  Congratulations on the release of A Perfect Trade!  This book grabbed me from the first page and still hasn't let go.  Please tell our readers what they can expect from this second book in your New Jersey Ice Cats series. 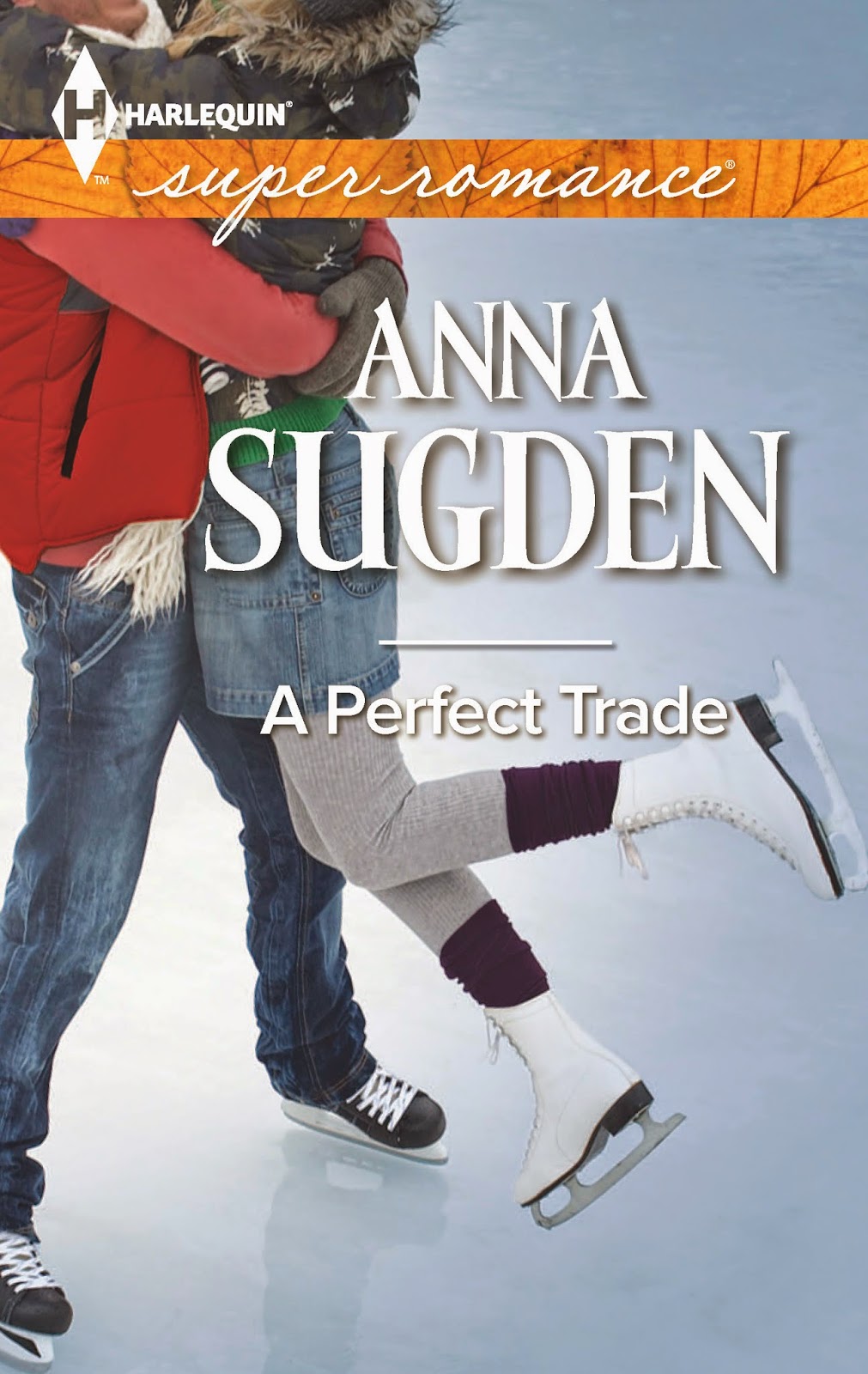 Aww thank you so much. I can’t tell you what it means to me that you enjoyed Tru and Jenny’s story.  The Ice Cats are back in A Perfect Trade. This time, the focus swings over to Jelinek family and middle brother, Tru - who is also Jake’s best friend.

There is a slight change of pace in A Perfect Trade, in that the season is more or less over and it’s not been a good one. Tru’s career with the Ice Cats is in jeopardy and he’s not happy about it. Meanwhile, the past has reared its ugly head with Jenny. So, you’ll all get to find out what caused the problems between them!

As with A Perfect Distraction, in A Perfect Trade, there are some complex emotional issues to be resolved before Tru and Jenny can have their happy ever after.

A win-win negotiation?
Truman "Tru" Jelinek's life is pretty much off the rails. With his professional hockey career on thin ice, and his personal life falling apart, he's ready to implement some serious changes. Helping Jenny Martin—the only girl he's ever loved—make her dreams a reality is a good place to start.
There's just one problem: Jenny doesn't want his help. She barely wants to speak to him. But Tru is prepared to negotiate a deal that even Jenny can't refuse. As trading favors turns into sharing passion, he has to face the truth that when it comes to Jenny, the game is far from over.

There are some major obstacles standing between Jenny and Tru and their potential happy ending.  What was it about these two that convinced you they had a shot at making it the second time around?

You know that feeling you have when you just know two people should be together? That’s what I had with Tru and Jenny. I think the key really was that these are two good people who have similar values. What split them apart was terrible, but it was done with the best of intentions. And, beneath it all, I could feel the need they each felt for the other. Not just attraction, but that calling from the heart of one mate to another.
As I was writing them, what became clear was that the past -- which had been terrible for both of them, for different reasons -- had forged two survivors. That they’d been able to overcome those issues meant there was hope that they could surmount these obstacles too.

My late husband was a brawny jock who knew his way around the kitchen so, of course, my heart melted when Tru’s method of comforting Jenny was to cook for her.  What comfort food would you most want your hero to cook for you?

I’m very lucky in that Doc Cambridge is a fabulous cook J In fact, right now, he’s making ice cream for me! Honestly, my favourite comfort food is a good, old-fashioned English breakfast (what we call a ‘fry up’!) - eggs, bacon or sausage, toast, baked beans, fried potatoes, mushrooms and some cherry tomatoes on the side. Yum!

Oh, that sounds yummy!  Breakfast is my favorite meal.

Jenny is a complex woman with more layers than her reputation would suggest.  What surprised you most about this character?

I fell in love with Jenny the minute she walked onto the page in A Perfect Distraction. Aside from her great boots <g>, she had such a confident personality, she was intensely loyal and she was a genuine and knowledgeable lover of hockey. Yet she chose to be a puck bunny (hockey groupie). What’s more, she’d made being a puck bunny into something elite. You can’t help but admire her!

What surprised me most about her was her vulnerability. I think we forget that people who appear tough on the outside, often have that protective shell for a reason. More, Jenny didn’t let her horrible past make her into a victim, but used her vulnerability to fuel her strength.

I think that's what I liked best about her too; the fact that she refused to be a victim.

There are some mouth-watering examples of hero inspiration among professional hockey players these days.  Did you use a real-life person as inspiration for Tru or is he strictly a product of your imagination? 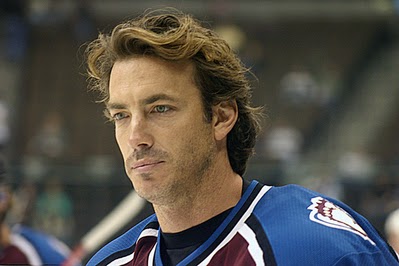 Excuse me while I pause to think about some of those mouthwatering hockey players <happy sigh>.

Oh, please take your time.  We'll wait here and drool over that photo on the left. Now that's inspiration!


While the Ice Cats series was inspired by real life hockey players -- especially the contradiction between the men they are on the ice and what they’re like off the ice -- as indeed was Jake, Tru was a figment of my imagination. Although, I must admit that Colorado Avalanche great, Joe Sakic, was in my head as the model of a player with an honest, honourable reputation. Then I added in the trait that I think many superstars must have, which is the belief that they know best about everything!

Absolutely. This is from a scene where Jenny and Tru end up at a place they used to go to when they were high school sweethearts. They’re both escaping their own problems and neither expects the other to be there.

Tru had barely taken a bite of his burger when he caught a movement at the edge of his vision. Jenny’s fork clattered to the table. She pushed her plate away and cradled her head in her hands.
Before Tru could question his actions, he was stand­ing by her side—with no idea what to say.
“You’re a long way from home.” Were those gruffly spoken words the best he could do?
Jenny’s back stiffened, but she didn’t look up.
Where was her usual snappy comeback? Her lack of reaction worried him. Whatever was wrong, was bad. He had to do something to spark a response. “Didn’t think this was your neighborhood anymore.”
She lifted her head, glaring at him. “Excuse me?”
“Look around. No hockey players.”
She raised an eyebrow. “You’re right. At least, no good hockey players.”
Ouch. Still, fire had finally flashed in her blue eyes.
He slid into the booth, opposite her.
“Go away, Truman. I’m eating.”
“Uh-huh. And what was that you were doing when I came over? Praying?” He winced inwardly. He’d wanted a reaction, not to hurt her.
“You, of all people, should know I don’t believe in God.”
“My point exactly.” He helped himself to a French fry.
“Hey, get your own fries.”
“You used to be better at sharing.” He plucked an onion ring from her plate and offered it to her. When she continued to glare, he shrugged and ate it himself.
Jenny stood, marched over to the waitress station and grabbed a bottle of ketchup. When she returned, she deliberately poured sauce over the fries and rings.
His heart kicked. She’d remembered he didn’t like ketchup. “Now, that’s just mean.”
He went to collect his own dinner and returned.
Jenny rolled her eyes. “Do you always force your company upon women?”
“I never have to force anything. They flock to me.”
“Like lemmings to a cliff?”
He grinned. “Not bad.”
“I’m just warming up.”

What can we expect next from the Ice Cats?

I’m just finishing up the third book in the series, tentatively titled A Perfect Catch, which is Ike and Tracy’s story. Boy are these two hard-headed people giving me a tough ride!  I don’t want to give too much away, other than to say that this deals with another aspect of a professional athlete’s life - injury.

Let’s talk about you for a bit.

We have a lovely conservatory on the back of our house. We had it built when we came back from New Jersey because we missed the bright light you got there. Plus we missed the ability to sit outside for so much of the year. Our conservatory allows us the bright light and the ability to sit ‘outside’ even when the weather is bad!

I have a really comfortable chair in the conservatory, which is perfect for curling up and reading. The only problem is that I have to fight my cats for my chair! Jersey Girl, in particular loves to sneak on there. 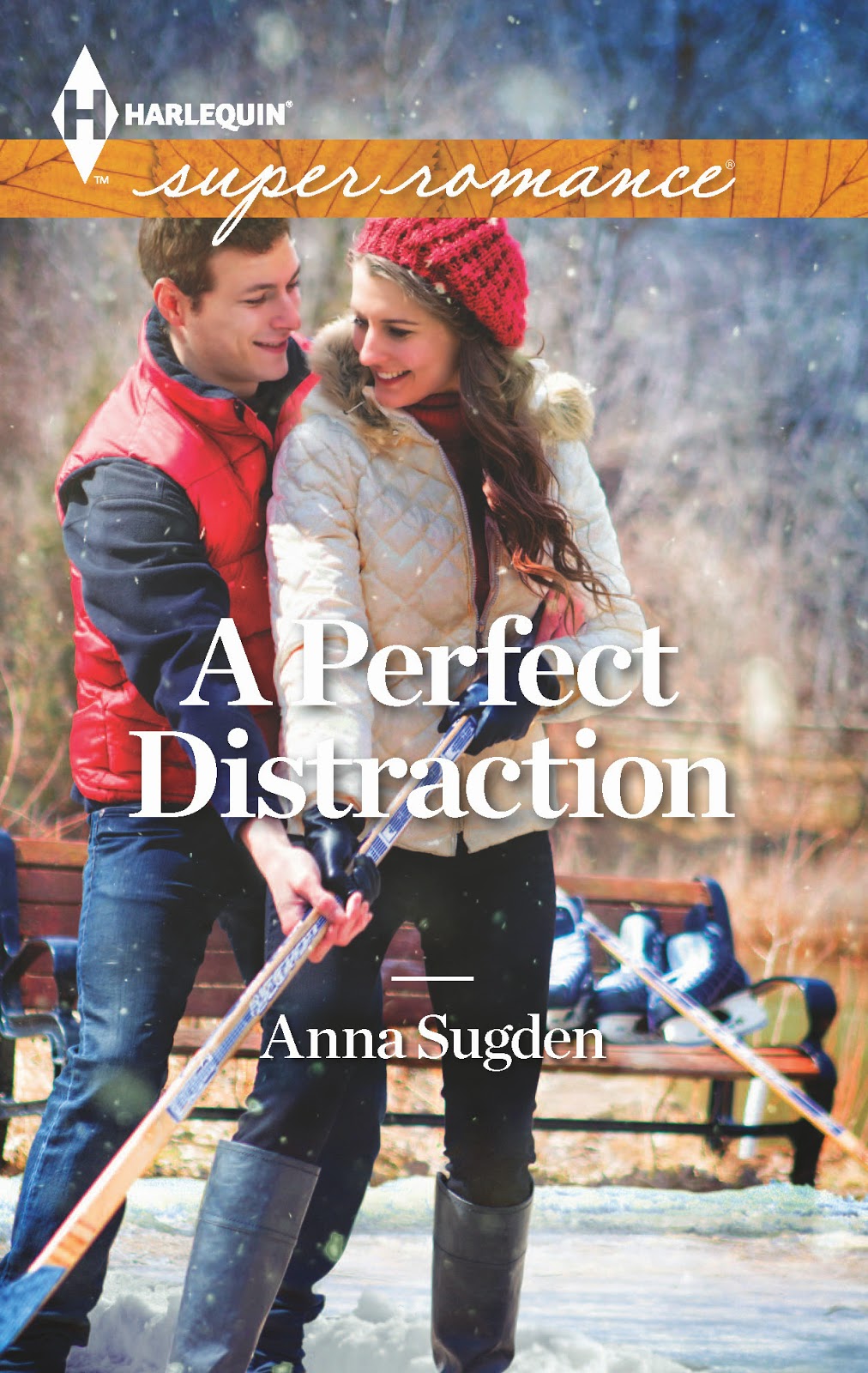 What books are on your reading list for this summer?  (I expect a re-read of A PERFECT TRADE to end up on mine.  Probably A PERFECT DISTRACTION too!)

One of the great things about the summer is that we tend to travel (eg to the RWA conference), which means two long flights with uninterrupted reading time! I usually save my romantic suspenses and thrillers for those journeys - so the latest Karen Rose, Lisa Gardner, Tess Gerritsen and JD Robb. I’m also saving the latest CS Harris.

It’s a good time to try new authors for me - this trip, I plan to read Starvation Lake by Bryan Gruley. It’s a mystery that features a hockey-playing newspaper editor as the crime-solver. Not my usual fare, but you can imagine what drew me to the story! ;)

Will you be attending any conferences or book signings where readers will have the opportunity to meet you this summer?

I will be at the RWA Conference in San Antonio later this month. This will be my first book signing, so I’m very excited! I’d love to meet any readers who plan to go to the Literacy Signing.

Can't wait to see you in San Antonio!

Thank you so much for visiting with us today, Anna.  Would you like to ask our readers a question?

It’s my pleasure. I love hanging out with everyone here! I’m going to steal one of your questions and ask everyone- does your other half cook (if so, what is his specialty) and what is your favourite comfort food?

One lucky person leaving a comment on today's post will receive a gift pack from Anna that includes a copy of A Perfect Trade as well as an exclusive A Perfect Trade notebook and key ring. And, Anna has generously opened this giveaway to all of our readers!