What Happens in San Antonio - - Part One 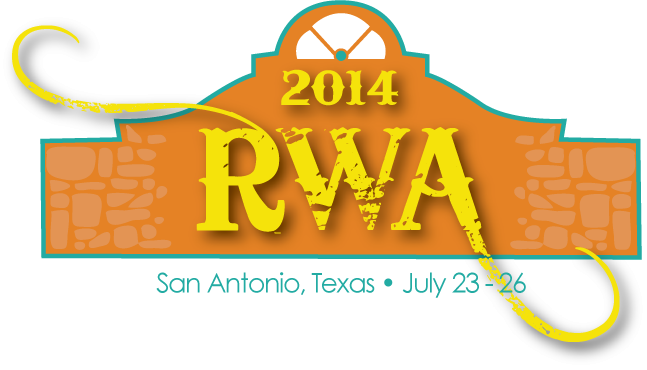 I live in the South.  It gets hot in the summer.  But hot in North Carolina and hot in south Texas are obviously two very different things.  I landed in San Antonio at 7 pm Monday evening, walked out of the airport and my glasses immediately steamed over. "Wow," I thought, "it's really hot!"  Taxi driver Eduardo greeted me with a smile, warmly welcomed me to his city and said, "Isn't this weather great?"  It's supposed to get hot later this week. At this point, I had two thoughts.  First was, "Holy guacamole!" and second was "I wonder if I'll sweat enough to fit into the RITA dress I brought with me?" Who says I don't have my priorities in order? LOL!

Thanks to Eduardo, my initial impression of San Antonio was a favorable one that set the tone for what was to be a lovely week in his city.  Everyone I encountered; from the hotel housekeeper who cleaned our room (Dolores Q rocks!) to the wait staff at local restaurants to shop owners to river barge drivers/tour guides to people on the street were friendly, accommodating, proud of their city and eager to help.  Okay, there was that one taxi driver who got ticked off that we only wanted to go five blocks in his cab but I don't count him. I'm sure he was a transplant from somewhere less friendly.

My roommate, Lisa wasn't scheduled to arrive until Tuesday so I hit the sack early Monday night for a good night's sleep in preparation for what was sure to be a week of sleep deprivation.  RWA's national conference is like that.  ;-)

Tuesday morning I awoke refreshed and ready to explore San Antonio with the awesome Kim of the SOS Aloha and Aloha On My Mind blogs.  While I was waiting for Kim in the hotel lobby I ran into historical romance author Elizabeth Essex.  At RWA, the hotel lobby is a great place to meet and greet, second only to hotel bars.  We started chatting about places where we get great ideas and when I mentioned I write entire reviews in my head while in the shower but forget key points by the time I get to the computer, Elizabeth whipped a pad of Aqua Notes (waterproof note pads) from her purse with a magician's flair. This product is my new best friend.  Thanks, Elizabeth!

Kim and I kicked off our exploration of San Antonio with a riverboat tour of the San Antonio River then followed that with a walk around San Antonio and the River Walk.  Following are a few highlights:

We really lucked out when we stepped onto Captain D's boat.  He was funny, knowledgeable and made the trip entertaining, educational and fun.  Tip:  River cruises begin running at 9am.  Take the early cruise before the heat becomes unbearable. 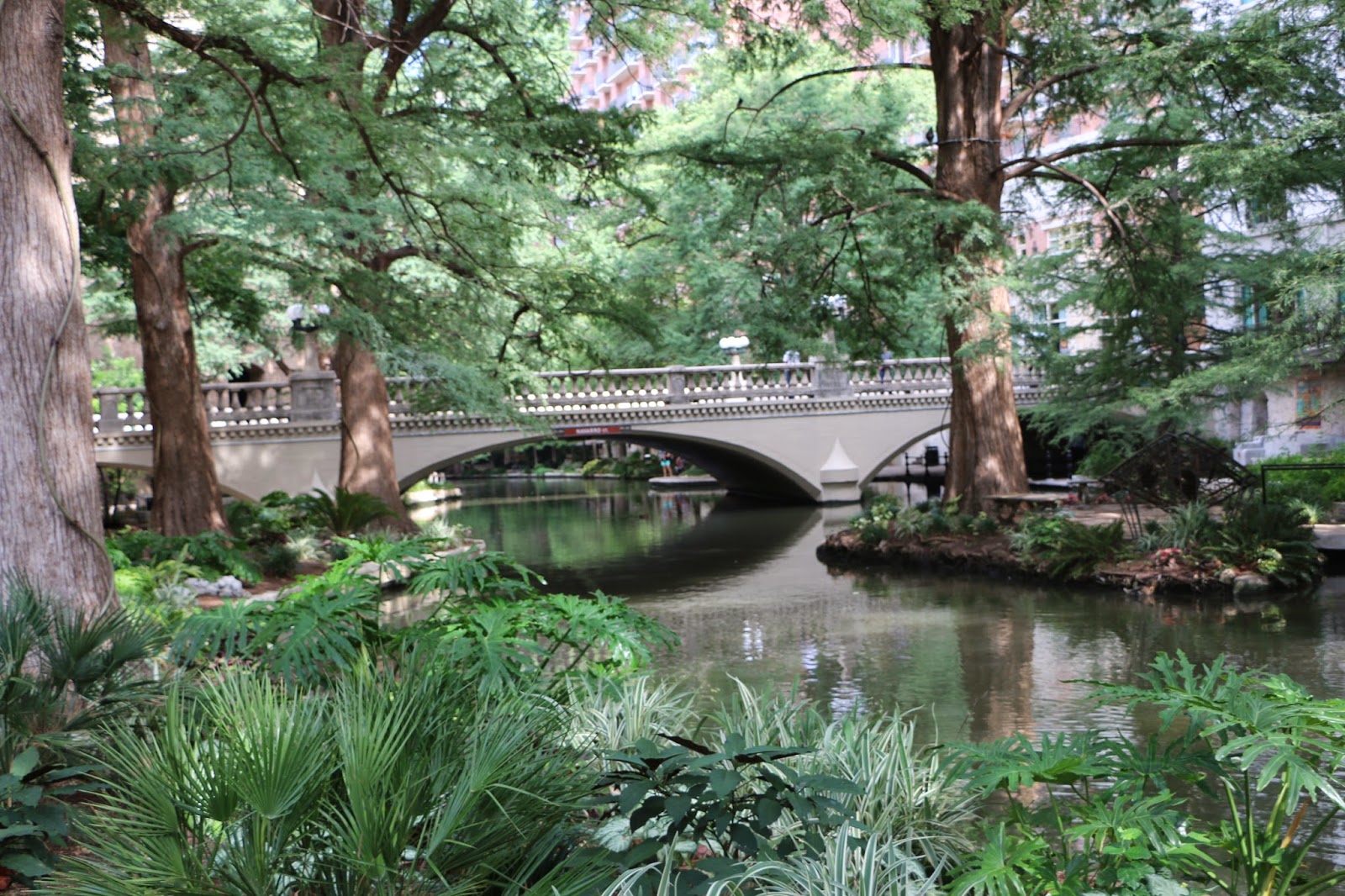 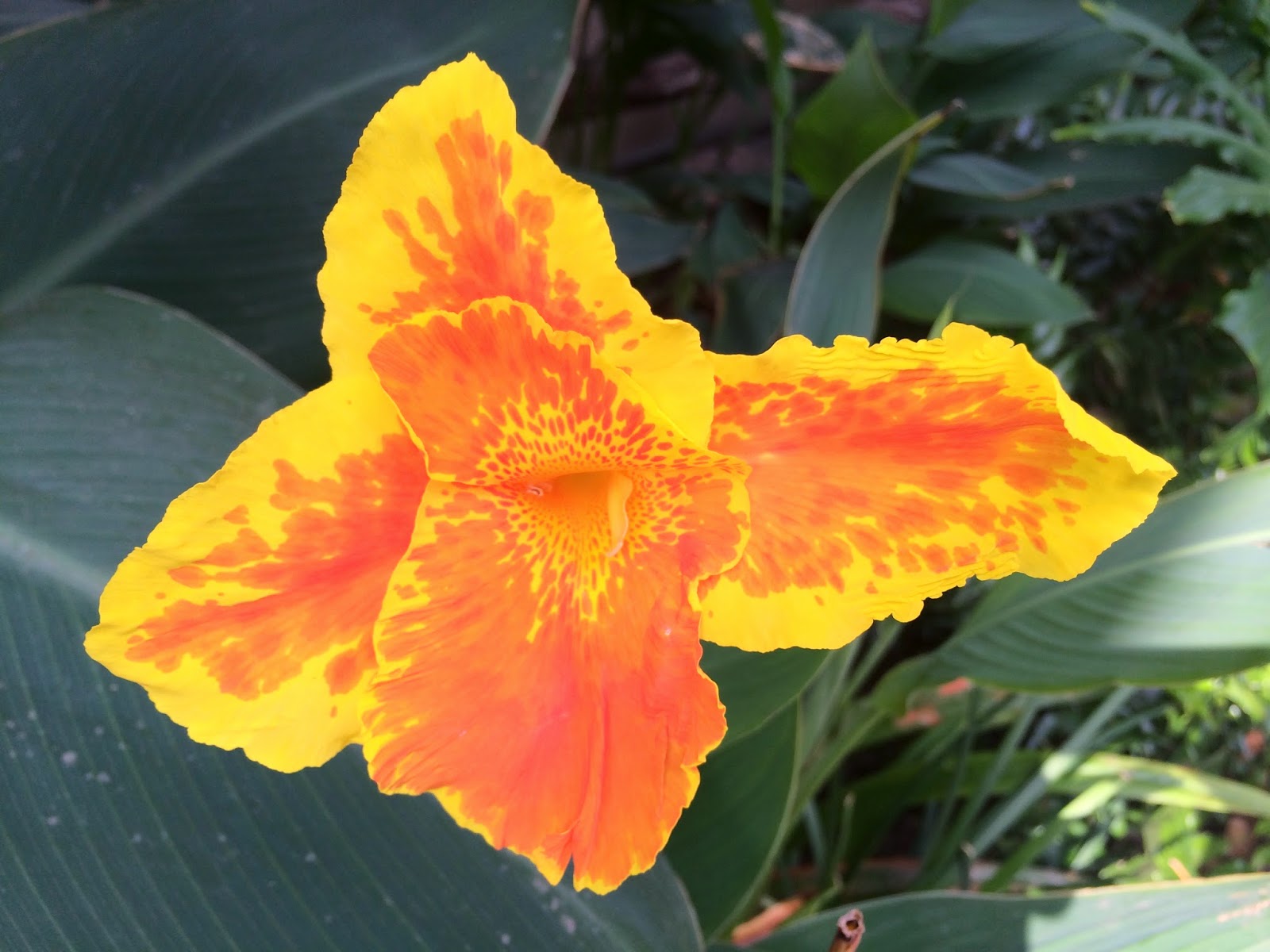 One of the gorgeous flowers found along the River Walk. 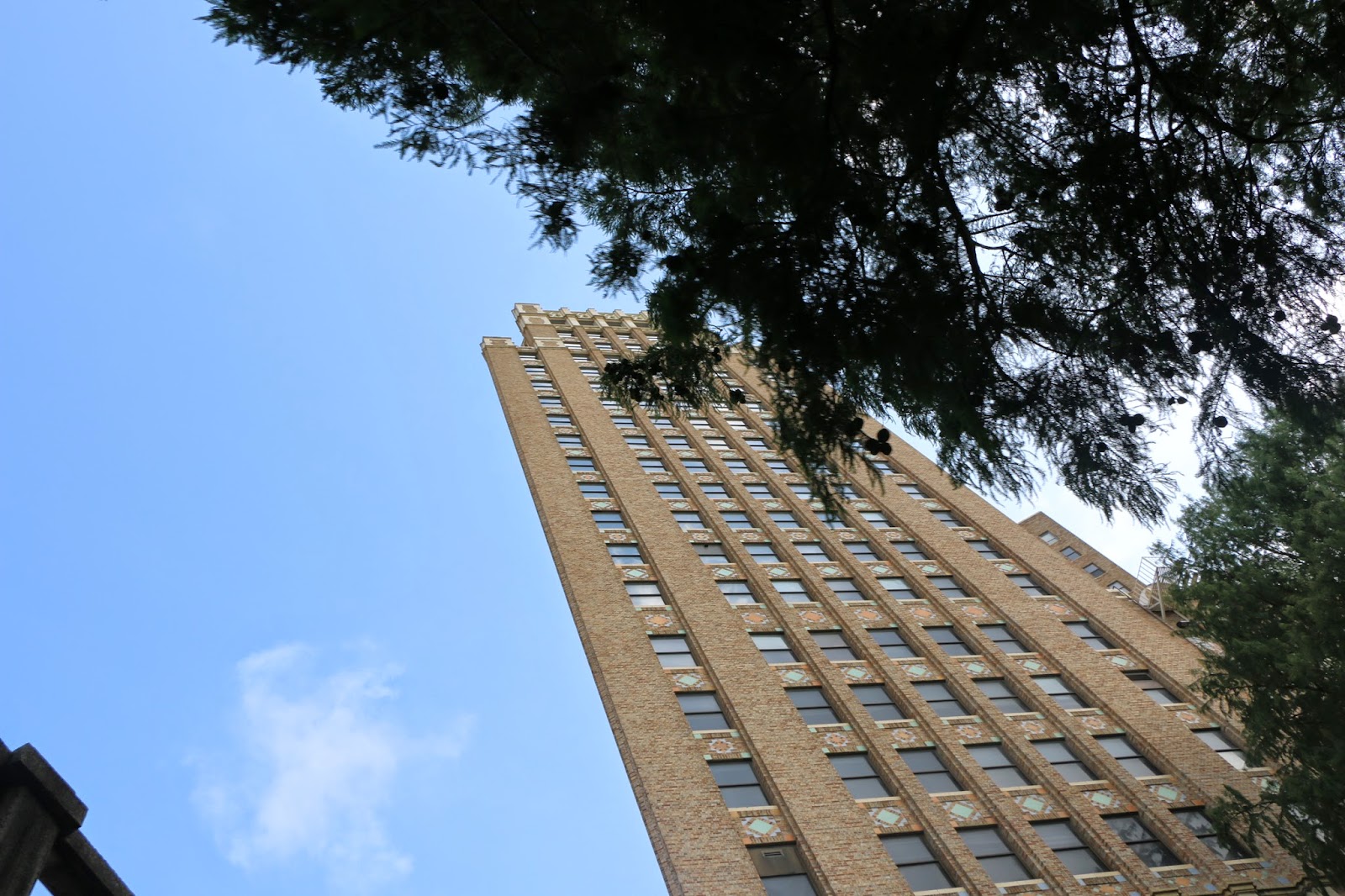 It's an optical illusion but check out the cool "flat" Nix Professional Building shown to the left.  It's a 23-story hospital on the River Walk that, at the time it was built, was the tallest hospital in the U.S. A bit of trivia: Carol Burnett was born in this building. 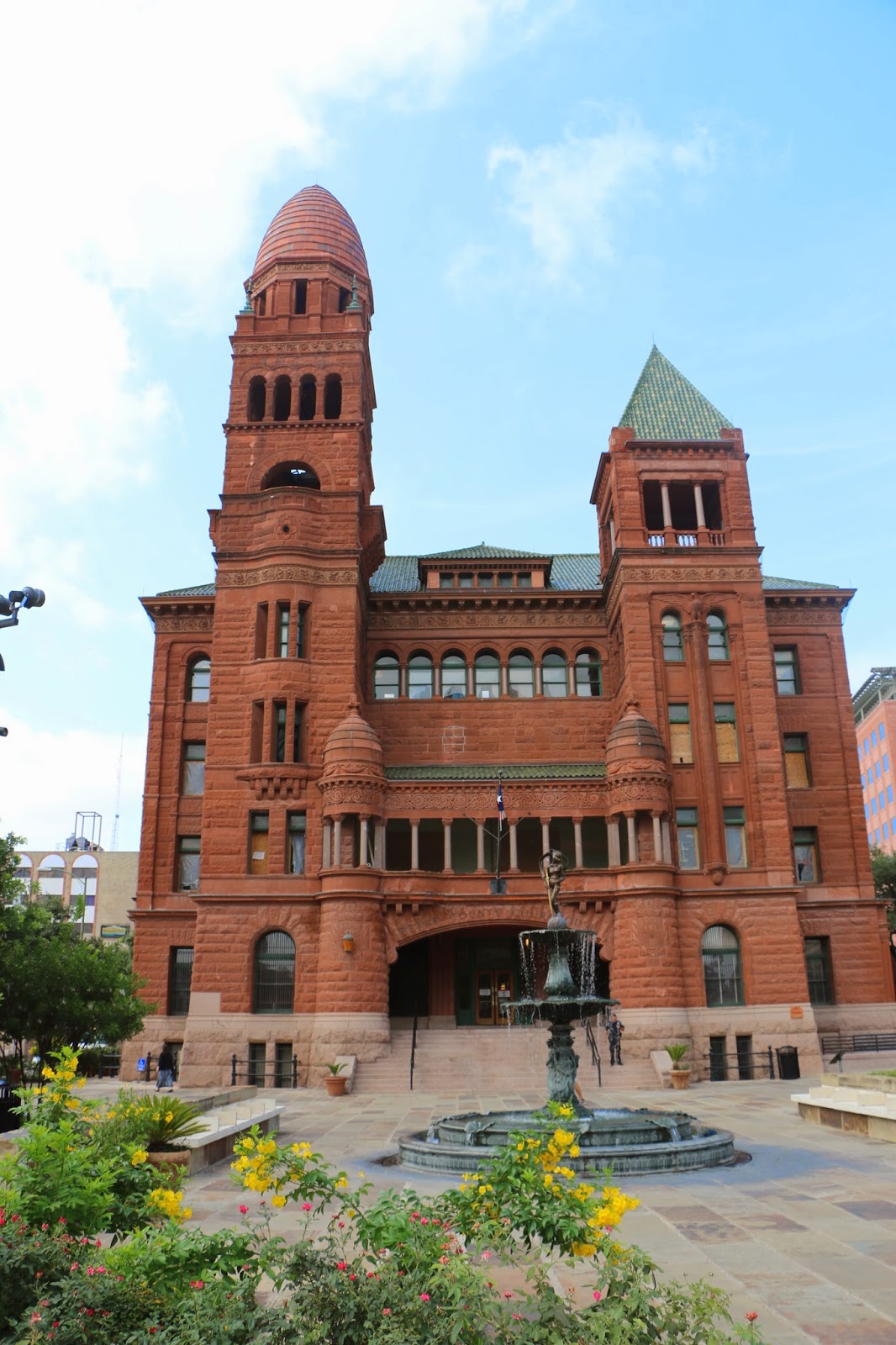 The Bexar County Courthouse is one of the most distinctive buildings in San Antonio.  This historical landmark sits on the Main Plaza along with the Cathedral of San Fernando.  Completed in 1896, the red sandstone building is on the National Register of Historic Places. 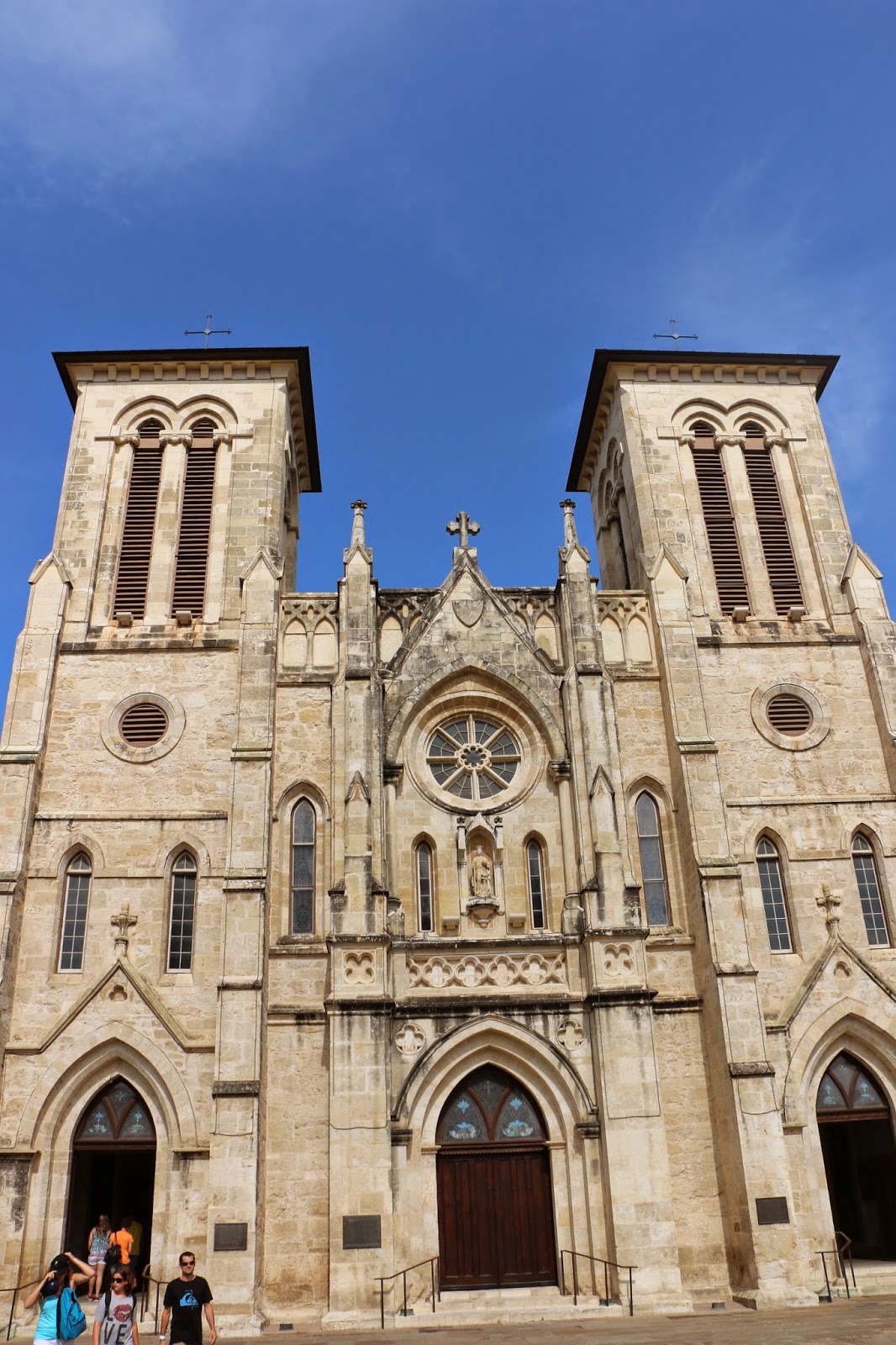 The Cathedral of San Fernando was founded in 1731, is the oldest, continuously functioning religious community in the state of Texas and one of the oldest cathedrals in the United States.  In 1836, the cathedral was instrumental in the siege of the Alamo when, according to Wikipedia "the cathedral, still a parish church, played a role in the Battle of the Alamo when Mexican General Antonio López de Santa Anna hoisted a flag of "no quarter" from the church's tower, marking the beginning of the siege." 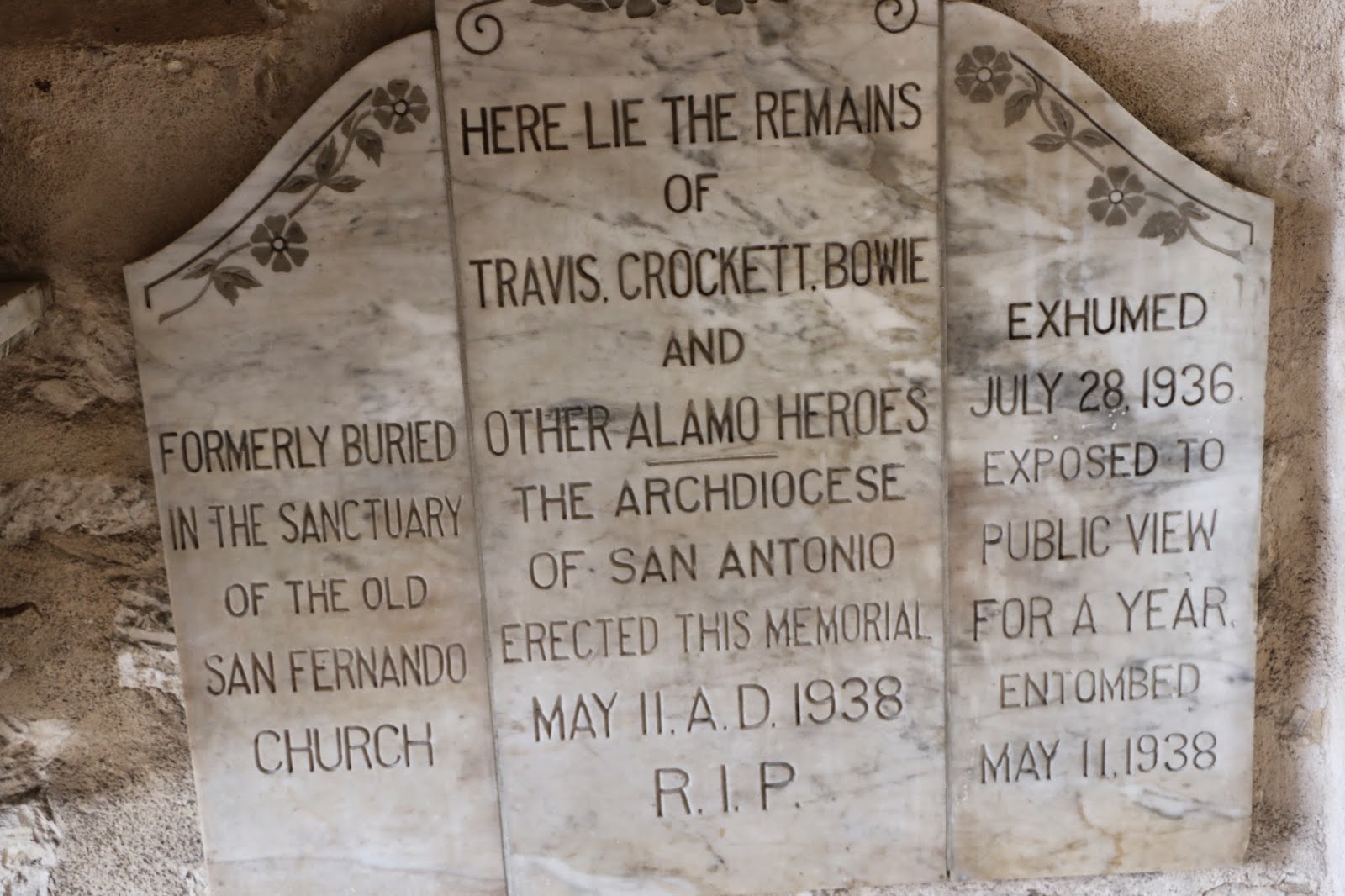 The Cathedral also houses the burial tomb of Davy Crockett, William B. Travis, Jim Bowie and other heroes of the Alamo. 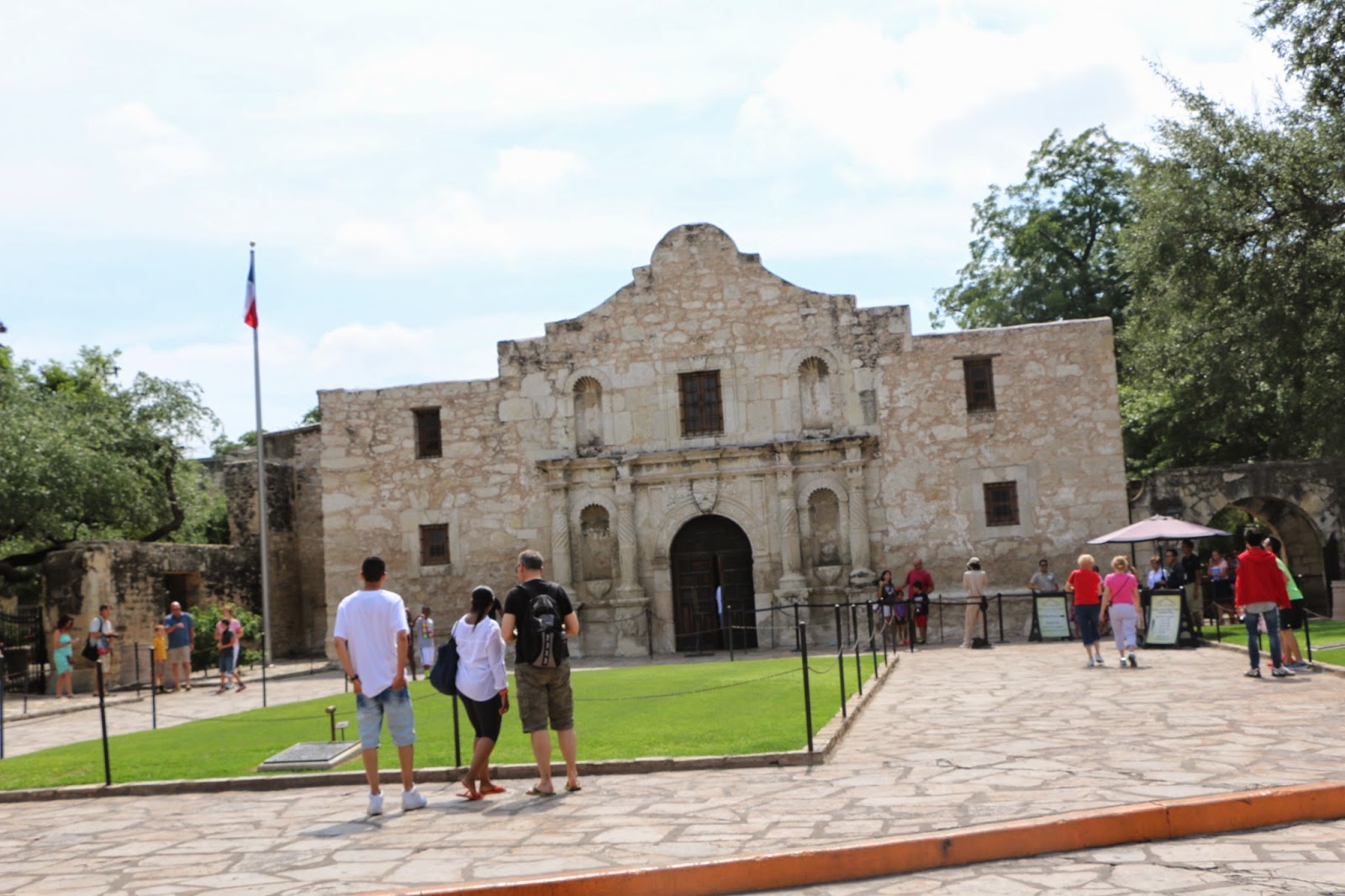 Speaking of the Alamo, we visited that too! 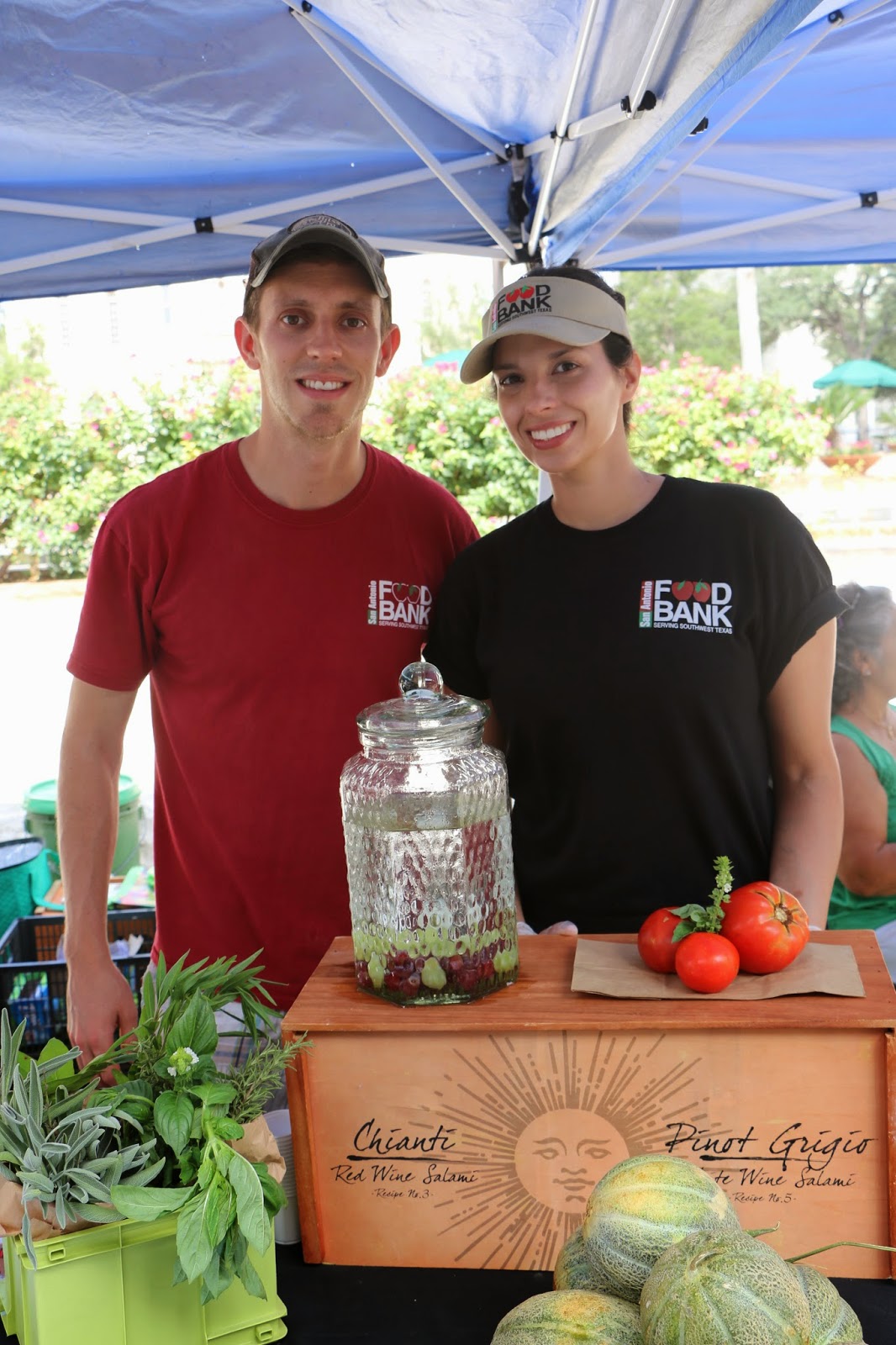 While at the Main Plaza, Kim and I checked out the Farmer's Market where we met these hardworking folks from the San Antonio Food Bank. If you're on Instagram, check out fitbot3000 for healthy eating tips. 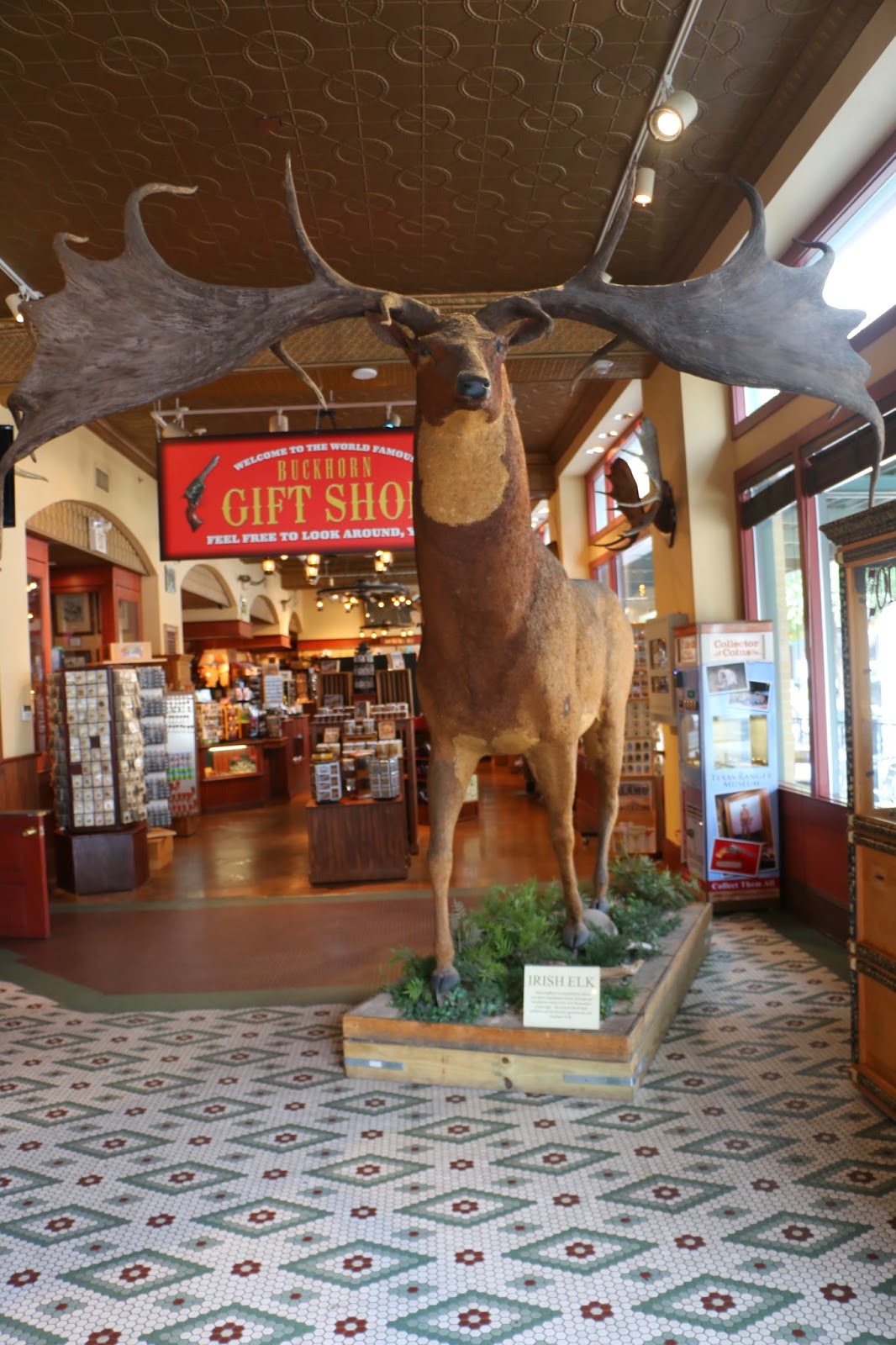 They say everything is bigger in Texas...including the animals at the Buckhorn Gift Shop. 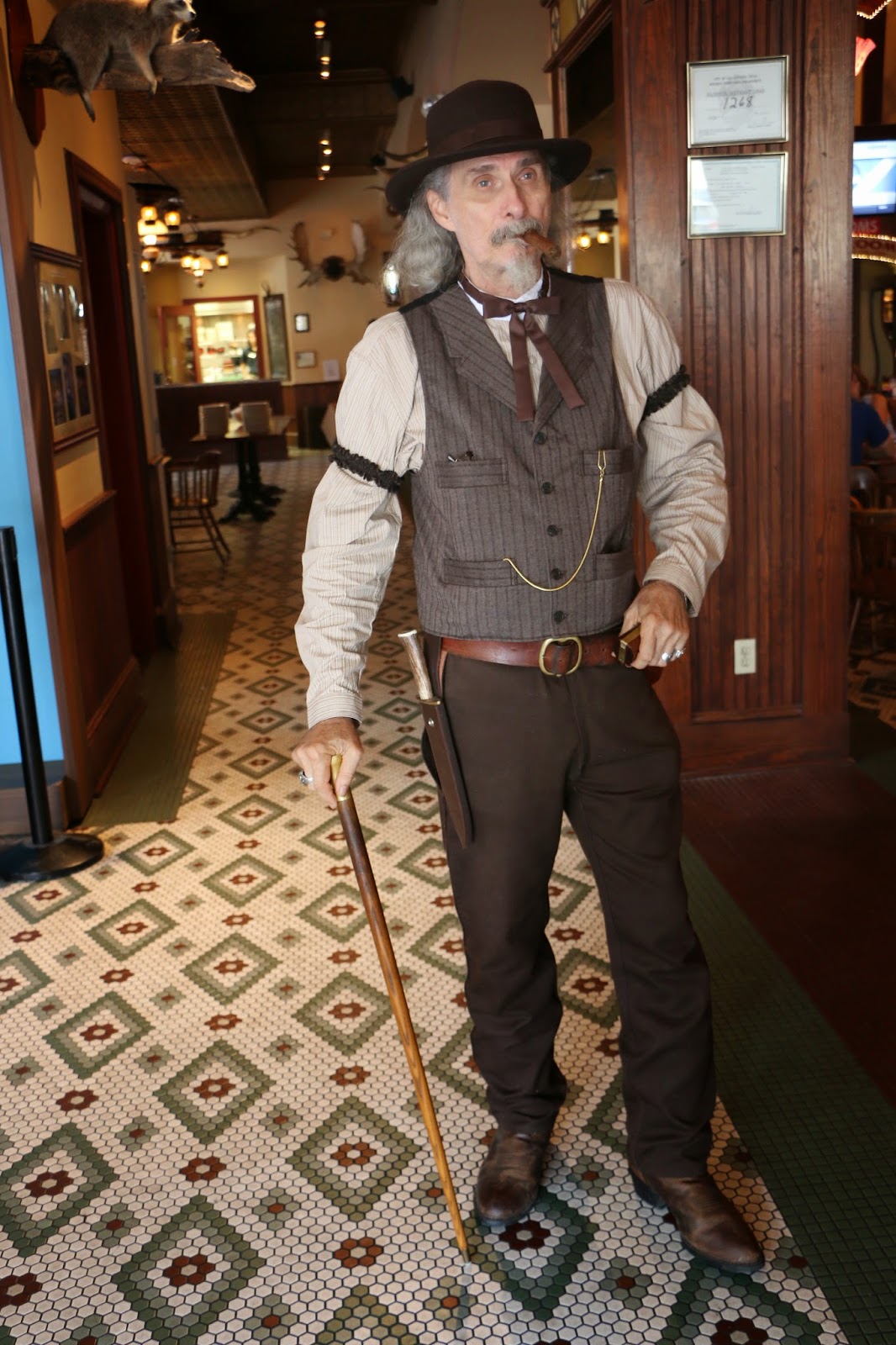 And, of course, no visit would be complete without a seeing a few cowboys. 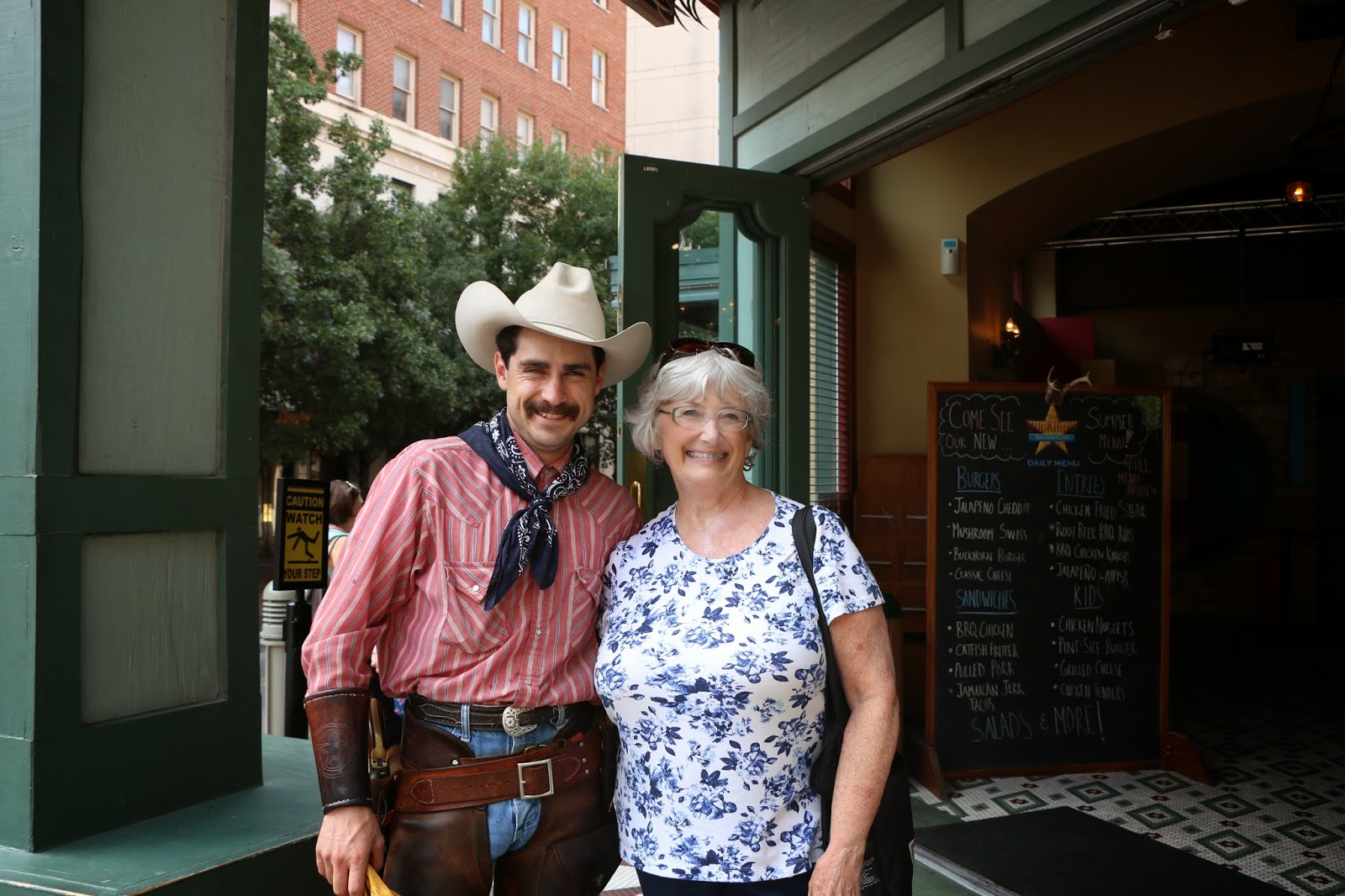 These two work a couple days at the shop but the rest of the week they're out on the range doing real cowboy work. 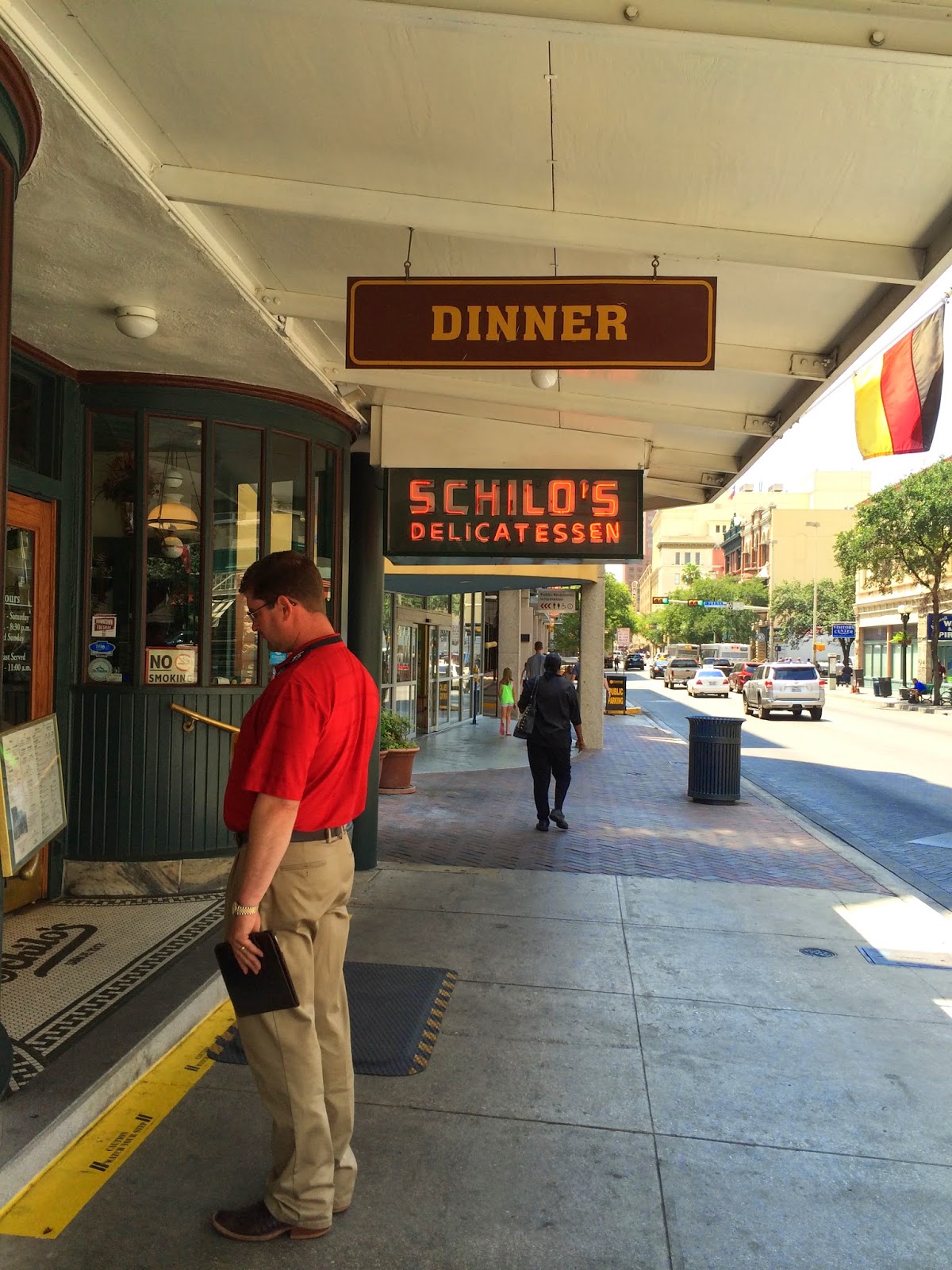 All that walking around in the heat - believe me, it was hot - conjures up a mighty thirst so I popped into Schilo's German Deli for a glass of their homemade root beer.  Having grown up on "real" A&W root beer (not the bottles and cans that can be found at grocery stores), I consider myself a root beer aficionado. I have to say, Schilo's make one delicious root beer!  If you're ever in San Antonio, I highly recommend it!

After my day of sightseeing, I returned to the hotel for a shower (I don't care what Eduardo said, it was HOT and I was soaking wet by the time I got back to my room) and got ready for my Tuesday evening dinner date with one of my favorite Aussies, Anne Gracie. Anne is one of those people who instantly puts you at ease and it doesn't matter how many years there are between visits.  When I see her we pick up as easily as if we had just seen each other a couple months ago.  We kicked off the evening with delicious frozen margaritas and followed those with authentic Mexican cuisine at Casa Rio, the first business to open on the River Walk (in 1946) and one of the most photographed with its patio of colorful umbrellas bordering the river. The core of the Casa Rio building is a Spanish hacienda on land first granted by the King of Spain in 1777.  Anne and I enjoyed a leisurely dinner and great conversation about a variety of topics, including her 2014 RITA nominated book, The Autumn Bride.  If you haven't read it yet, I highly recommend it! 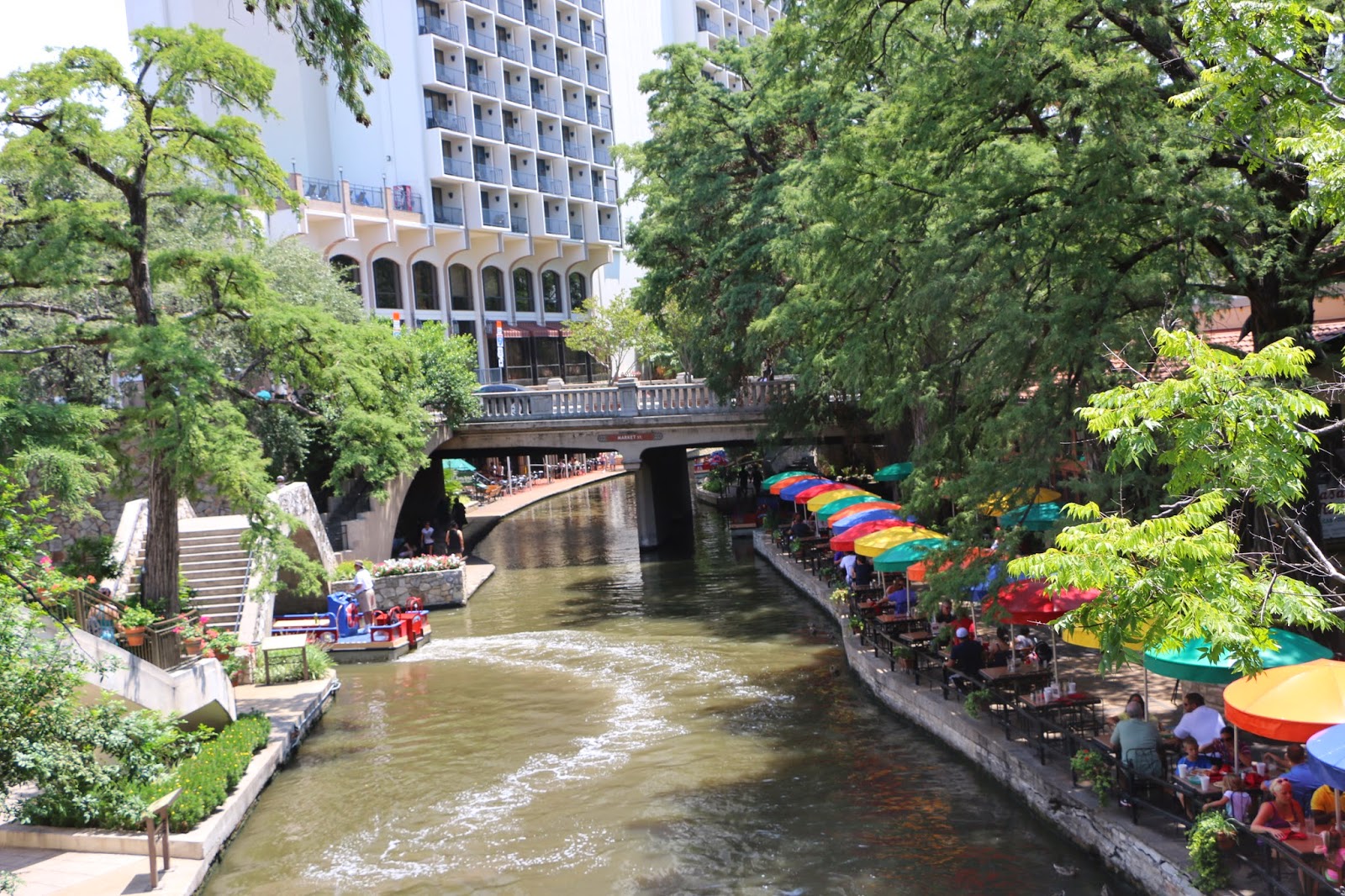 Back at the hotel, I stumbled upon my roommate, Lisa Lin as well as (suspense author) Carey Baldwin, (historical romance RITA finalist) Tessa Dare, (historical romance Golden Heart finalist) Lenora Bell and (historical Romance author) Erica Monroe.  We caught up over drinks (Strawberry Margarita, anyone?) before finally heading to bed. I knew I'd need a good night's sleep for all the fun and festivities of Wednesday!


Tell me about your latest vacation.  Where did you go?  How was the weather?  Were the people friendly? What were some of the highlights of the trip?  Were there margaritas? Have you been to San Antonio?

One person (U.S. addresses only) who leaves a comment will receive a package of books and swag from my conference stash.  I'll randomly choose a winner from comments left before 12:00 am, EST Saturday, August 2nd.

Don't forget to come back tomorrow for the second installment of What Happens in San Antonio!

Posted by pjpuppymom at 1:09 AM