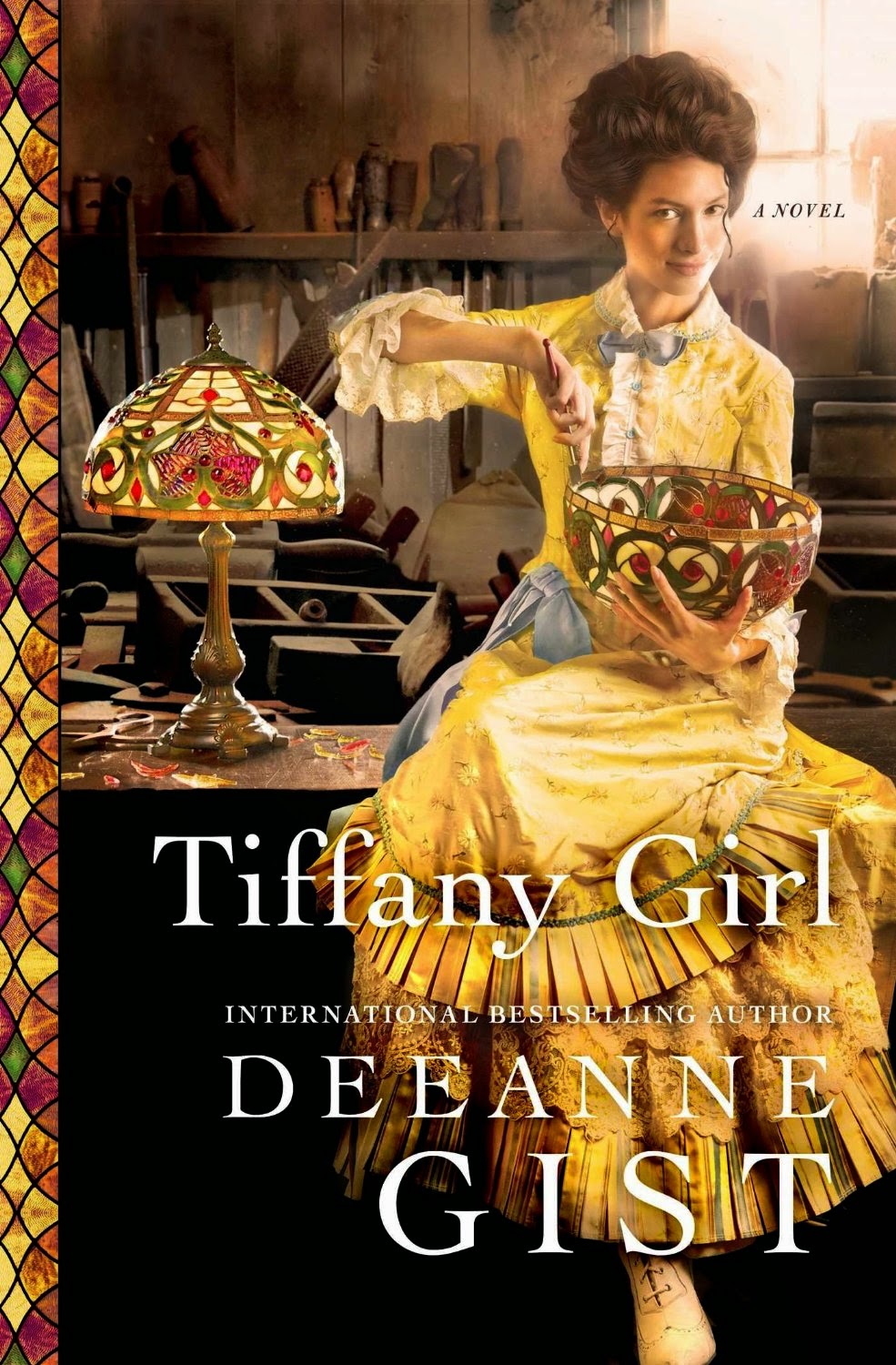 In 1893, the United States prepared to welcome the world to the Columbian Exposition, also known as the Chicago World's Fair. In New York City, Louis C. Tiffany's plan to create a stained glass mosaic chapel for the Fair was thrown into chaos when his male workforce went on strike. Desperate to finish the project in time, Tiffany made the controversial decision to hire female art students to replace the striking men.

The only child of a successful barber and seamstress, Flossie Jayne grew up happy, loved and assured of her place in the world. Flossie's parents adored, indulged and encouraged her in her artistic pursuits - perhaps a bit too much, as indulgent parents are wont to do. With that background, it should come as no surprise that when her father's betting losses mean Flossie will have to leave art school, it's a situation she does not accept gracefully. Talking her way into a job with Mr. Tiffany when he visits her art class, Flossie makes the bold decision to leave her father's home, move into a boarding house and claim her wages for her own. She becomes a New Woman.

Life as a New Woman is not as carefree or successful as Flossie anticipates. There are many potholes she must navigate and truths she must face if she wishes to remain an independent woman. Might the handsome but quiet boarder across the hall be the one to help Flossie find destiny's path?

Newspaperman, Reeve Wilder is a loner who likes his solitude. Raised by stern grandparents following his mother's death, Reeve has never learned the art of making friends or leading a well-rounded life. In fact, the only person he counts a friend is an elderly woman who also lives at Klausmeyer's Boarding House. When Flossie moves into the room across the hall, it's a bit like being hit upside the head with a Suzy-sunshine, chatterbox two-by-four. He's annoyed, then intrigued and, finally, reluctantly charmed. But he's had a lifetime of being alone. Does he possess the inner strength to step outside his self-imposed box and what will happen if he does?

In each of her Chicago World's Fair books, Deeanne Gist has created a sense of time and place that draws me into the world of her characters as if I'm traveling their journey with them. Her research is impeccable and it shows in the details sprinkled throughout. The characters are true to their time and I appreciate the intimate glimpses into their daily lives that show us how people actually lived in 1893 New York City. Another by-product of all that research. The secondary characters run the gamut from Flossie's parents to her co-workers at Tiffany's to angry, male strikers to her fellow boarders. Gist's method of revealing details about each of the boarders is clever and gives us insight into each of them without having to employ an "info dump." I found it delightful and wished Flossie had a question for me. Real people and fictional characters are interwoven seamlessly in this book, with the fictional characters being so well developed and realistic that, at times, I forgot which was which. Not mere window dressing, many of the secondary characters contribute significantly to the story and move the plot forward.

Some of you may associate Deeanne Gist with inspirational novels. The Chicago World's Fair books are not inspirational but they do fall on the sweet side of the fence. I would classify Tiffany Girl as historical fiction with a warm romance but no sex. That's not to say there isn't sexual tension and real emotion that left me a thoroughly satisfied romance reader along with all the wonderful details that satisfied my historical curiosity.

While we can't travel through time to visit the 1893 World's Fair, we can do the next best thing and experience it through the wonderful pages of Tiffany Girl as well as the two previous books in this series, It Happened at the Fair and Fair Play (stand-alone books). I highly recommend them all.

PJ: Thank you for taking the time to answer a few questions for me, Deeanne. I just finished reading TIFFANY GIRL and, once again, thoroughly enjoyed immersing myself in the lives of your characters during this evolving time in history. What inspired you to set this series of books during the 1893 Chicago World’s Fair?
Deeanne: I’d only planned to write one book about the 1893 Chicago World’s Fair (It Happened at the Fair), but by the time I’d done the research for that book, I was stunned at what a pivotal event it was for our country. Why it has been left out of our high school history classes, I don’t know, but it set the standard for architecture in the upcoming century. It introduced foreign cultures to our amazed population. It wowed the world with our scientific innovations, and it gave women their first official board position recognized and approved by an Act of Congress (all before we had the right to vote).
There was so much I wanted to include in that first book but didn’t have room. So I called the publisher and said, “Let’s make this a Chicago World’s Fair series.” And they said yes. The books can be read in any order, since the only character they have in common is the Fair.
Tiffany Girl is set around the all-mosaic chapel that Louis C. Tiffany exhibited at the Fair. It was his big debut in stained glass, and five months before the Fair his glass workers went on strike. In an act of desperation, he hired women art students to complete the exhibit, since females weren’t allowed to be members of the union. No one believed a set of young, inexperienced women could complete the project in time. But not only did they complete it, they became a permanent fixture within Tiffany’s studio and were given the name “Tiffany Girls.” I decided to fictionalize one of those girls.

Flossie Jayne, the heroine of this book, is one of those "Tiffany Girls" and might be considered a bit of a rebel for her time. What would you like readers to understand about this character?

When I start building the protagonist of a book, I make a fictional timeline of her life from birth to the first page of the book. That helps me know what baggage the heroine brings to the book. In order to build her backstory, I research women of the time who had the same profession as my heroine. In this case, women artists.

I read journals and books and newspaper articles from back in the day. One of those journals was written by a woman who was an only child and the apple of her parents’ eyes. So I decided to make Flossie Jayne an only child. From there, I read all kinds of books about what it was like to be an only child—the things they struggle with, the things they excel at, the characteristics that are common among them, etc.

With all of that under my belt, I found I had a vivacious and ambitious young woman bursting onto the first page of the book. She’d been told her entire life that she was extraordinarily talented (whether she was or not) and that she was a very special snowflake (whether she was or not). When she makes the bold move to leave home to become a working “New Woman” (a rather shocking thing for a single woman at the time), she suddenly discovers that life in the real world is not at all she’d been led to believe it would be.

I’m fascinated by the level of detail in this book and the intimate look into the private and professional lives of people in 1893 New York City. Are there other books or research sources you would recommend for readers who would like to learn more about this era?

Oh, golly. I read hundreds of books and articles during my research. There wasn’t any particular one that jumped out more than others. I wish there had been. It would have definitely made my job a lot easier! But as it was, I would read an entire book and only be able to use limited information from perhaps a chapter or two. The problem was, I didn’t know what information I would need without reading the entire book!

Still, I read about the social climate of New York City, the economic climate, the political climate, and even about the actual climate (as in weather). As for the actual Tiffany Girls, there was one book that did rise to the top. It is called A New Light on Tiffany, and it was written by the scholars who uncovered boxes of letters written by the head of Tiffany’s Women’s Department, Clara Driscoll. It provided a great overview. From there, I hunted down those same handwritten letters and found them in a historical society. I read all of the ones Clara had written during the 1890s. Those also gave me an intimate look at NYC at the turn of the century.

Have you ever attended a World’s Fair?  If so, what did you find most impressive?

Oh, I wish I had! I would LOVE to have gone to one. I can tell you this, though: when anyone ever asks me where I’d like to go if I could travel back in time, I now have an immediate and ready answer: “To the 1893 World’s Columbian Exposition!”

Women made significant contributions at the 1893 Chicago World’s Fair, from management to all types of labor. Your World’s Fair books have included females in a variety of roles ranging from doctors to nurses to ceiling painters to Tiffany glass makers. If you could travel back in time and be part of this event, what role would you want to fill?

I honestly think I’d like to go as a guest. Is that cheating? But if I were to go back as a doctor, or nurse, or Tiffany Girl, I wouldn’t have the freedom that the guests do, and I’d definitely want the freedom to explore every inch of every building and all the grounds without any time restraints.

Not cheating at all! I think it would be wonderful fun to go as a guest!

What’s next? Will there be more World’s Fair books?

Alas, Tiffany Girl is the final book in the World’s Fair series, and I depart from the Fair with a bittersweet feeling—probably not all that different from those who actually waved goodbye to the Fair back then. I leave it with feelings of awe at what we, as a country, accomplished in the 400 years since Columbus’ discovery. With feelings of pride for all that America was and is. With feelings of excitement for the innovation of man in general and Americans in particular. And a feeling of nostalgia for a time when all the world could gather in one place in perfect peace and harmony.

As for what’s next, I have about five ideas rattling around in my head and have not quite decided which one I’m going to pursue. When I do, I’ll be sure to The Romance Dish readers know, though!
Thanks so much for having me. It’s been a joy!

Thank you, Deeanne! I'll be looking forward with anticipation to whatever comes next!

Readers, have you ever attended a World's Fair?

If you could go back in time to the 1893 Chicago World's Fair, what role would you want to fill? Guest? Glass maker? Female Doctor? Architect? Would you want a seat on the Women's Board?

A character in Tiffany Girl builds a home from a Sears, Roebuck house kit. Have you ever constructed a building from a kit? How'd it go?