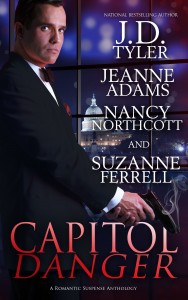 The United States has sworn in its first woman President and inauguration parties are in full swing across Washington, DC but one party is about to come to an abrupt halt. The Red Mantle, a homegrown terrorist group that believes women have no place in government, has infiltrated the hotel where the party is being held with a plan to kill as many high-ranking, female government officials as they can, including the new President, who they have good reason to believe will be making an unscheduled stop at the party. Will anyone be able to stop these well-organized killers before they reach their target?

Capitol Danger is a unique anthology in that each of the four stories, written by Suzanne Ferrell, Jeanne Adams, Nancy Northcott and J.D. Tyler, occurs during the attack on the inaugural party yet is told from the perspective of that author's characters. Undercover FBI agents, a television reporter, a former Special Forces medic battling PTSD, a rookie agent from one of those no-name black ops agencies and many everyday people with no special training must all put their fears aside and work together when chaos erupts. Events move seamlessly from one story to the next as friendships are forged, relationships are tested, the suspense builds, and lives are put on the line as the characters race against the clock to identify and stop the terrorists before more lives are lost.

There's plenty of action in these well-written, tightly-woven novellas that tell a suspenseful, edge-of-the-seat story that could easily have been ripped from real-life headlines. The four authors skillfully navigate the tunnels, stairways, hallways and ballrooms of the fictional Fierenze Hotel without missing a beat. The collaboration among the authors and attention to detail is evident throughout with the suspense skillfully built from beginning to end. Romance is light but leaves readers with the possibility of happy endings for several of the couples; couples I was delighted to discover that we'll be seeing more of in future books and novellas from all four authors.

In the case of Luke and Abigail from the first novella in the anthology, their full story has already been published and can be read in Suzanne Ferrell's Vanished (27 Feb. 2014).