Review - - If You Only Knew

If You Only Knew
By Kristan Higgins
Publisher: Harlequin HQN
Release Date: August 25, 2015 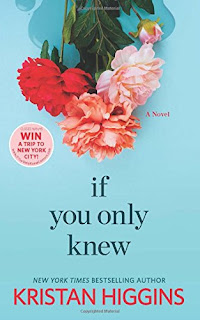 Eighteen months after her divorce from Dr. Owen Takahashi, a plastic surgeon with a social conscience, Jenny Tate is leaving Manhattan where she has enjoyed considerable success as a designer of wedding dresses to return to her hometown, Cambry-on-Hudson. If she had any doubts that her decision to open her own shop where she planned to sell custom-designed wedding gowns was the right choice, they are erased when a baby shower for Owen’s new wife ends with Jenny helping to deliver their baby in the apartment that Jenny once shared with Owen. She needs some distance from the Takahashi family and her role as best friend to her ex and Ana-Sofia, his perfect Peruvian mate. Her shop, Bliss, a great new apartment, and the presence of her sister and nieces in Cambry-on-Hudson are reasons enough to be excited about the move.

Unlike her sister, Rachel Carver’s ambitions never centered on her career, although she enjoyed her work as a graphic designer at a company that made computer games for kids. But Rachel’s dream was always to have a husband, a home, and children. It took some time and in vitro fertilization before the babies came, but now Adam and Rachel have triplet daughters whom they both adore. But life with three preschoolers is demanding and exhausting, so exhausting that Rachel even fell asleep once during sex. Still, she is happy with her life and in love with her husband. When she discovers a sexually explicit photo on her husband’s phone, she buries her questions and accepts his explanation. When she learns later that Adam is engaged in an affair with a colleague, she is hurt and angry.

When a penitent Adam begs for a second chance, Rachel, after considering their years together and Adam’s strengths as a father and provider, agrees to reconcile. But trust once broken is not so easily restored, and Adam’s promises prove to have little substance. While Rachel is examining her choices, uncertain about what is best for her and her children, Jenny is finding joy in a relationship with her sometimes surly, always studly, and definitely mysterious landlord, Leo Killian. But Leo has a full load of baggage, and he is far from ready for the kind of commitment Jenny wants. As both sisters deal with the emotional stress of conflicted relationships and weigh the costs of their choices, they offer one another love and support, emotional and practical.

In this book, Higgins departs from her usual contemporary romances to give her readers a women’s fiction tale that is as much about the personal journeys of Jenny and Rachel and the bond of sisterhood that unites them as it is about their relationships with the men in their lives. The change in genres does not mean that the qualities Higgins fans love in her books are missing. There is humor here, some great dialog, mother issues and family secrets, and, of course, a loveable dog, but there is also heartbreak, anxiety, and real poignancy.

Quirky Jenny is the kind of character I expect a Higgins heroine to be, and I liked her from the beginning, even when her behavior made me shake my head. I found Rachel less likeable, but to be honest, this may well have been because her story was too close to some family matters about which I have strong opinions. Leo is wounded and in hiding from himself and from life. I found him sympathetic and interesting. Even Adam is more than a one-dimensional jerk, and several other secondary characters add texture and complexity to the story.

If you like Kristan Higgins and women’s fiction, I think you will find this novel well worth reading. Higgins provides a layered treatment of marriage, infidelity, and divorce that includes a look, sometimes probing and sometimes glancing, at half a dozen different relationships. Do be warned, however, that the ending is not the rosy-epilogue, fairy tale finish that some romance readers demand.  I won’t be surprised if Higgins joins authors like Robyn Carr and Susan Mallery in producing a women’s fiction novel periodically along with her contemporary romances. She has proven she has the skills to do it.  With that said, I admit that I will never be as excited about a woman’s fiction novel as I am about the next Blue Heron book that will be published in January 2016. (Connor’s story—yay!)

Email ThisBlogThis!Share to TwitterShare to FacebookShare to Pinterest
Labels: 4 Star Review, If You Only Knew, Janga, Kristan Higgins, Women's Fiction