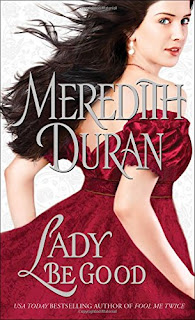 The third novel in Meredith Duran’s Rules for the Reckless series opens in 1882 London. Victoria is on the throne, Gladstone is prime minister, and professional thief Lily Monroe, daughter of a crime boss and niece of his successor, is literally caught in a tight spot. Bleeding from a bullet wound, she eludes her pursuers only by forcing her way through a space so small she injures herself further. When she gives her uncle the stolen deed, he gives her the news that her older sister Fiona is dead from complications during surgery for appendicitis. Four years later, Lily Monroe has been transformed into Lilah Marshall. Lily studied art and history, pored over etiquette books, endured years of elocution lessons, learned to dress in silk and lace, and finally secured employment as an Everleigh Girl, a professional hostess hired by the auction house to charm potential clients—all to fulfill Fiona’s dream of a better life, one free from fear and crime. But Lilah is not yet free of Lily. Her uncle, Nick O’Shea, has threatened to reveal her real name and past to those who know her as Lilah unless she steals letters belonging to Peter Everleigh. Lilah’s attempt to steal the letters goes awry, and the letter end up in the possession of Christian Stratton, Viscount Palmer.

Palmer is the highly lauded Hero of Bekhole, a sobriquet he earned after he turned what should have been a British disaster in Afghanistan into a victory. His compatriots celebrated his deeds in tales and songs, but Bolkhov, a mad, radical Russian general targeted Christian as the one responsible for the destruction of a compound in which Bolkhov claims his captured Afghani wives and the children they bore him were located. The Russian captures and tortures Christian and swears to destroy all those Christian loves. When the death of Christian’s brother in a fire is accompanied by a note from the general, Christian, now unhappily the new Viscount Palmer, knows he must find and destroy the madman in order to protect the rest of the Stratton family.

When Christian recognizes a candelabrum among a group of Russian artifacts on display at the Everleigh auction house, he realizes that the general must have been in contact with the Everleighs, Hoping to use them to find the general, Christian proposes that Catherine Everleigh visit an estate he has just inherited to manage the sale of the antiques that fill the house. He is prepared to marry Catherine if the marriage will give him the information he needs, and her presence at the estate will give him time to court her. When he discovers Lilah’s theft of the letters, he does not hesitate to blackmail her for his purpose as well. He will see that she is named an assistant to Catherine, an advance for Lilah and a position that will allow her to serve as unofficial chaperone while the lady visits a bachelor residence. Lilah must also serve as Christian’s spy and promote his interest with Catherine.

Lilah does her best, but Catherine remains far more excited by the contents of Buckley Hall that by Viscount Palmer. Meanwhile, Lilah and Christian have become allies of sorts, and the chemistry that has been evident since their first encounter intensifies each time they inhabit the same space. But the growing intimacy between them cannot change the vast differences that separate them. Even when an announcement underscores this fact, Lilah refuses to become the passive, protected woman.  She will even become Lily again to protect the man she loves, and both she and Christian will risk losing everything before they allow themselves to believe that love can transcend all obstacles.

One again Meredith Duran demonstrates her skill at operating within the conventions of romance while giving her readers a story that distinguishes itself with its difference. Duran takes the standard tropes of cross-class romance, makeover, and revenge plot, adds a distinctive twist to each trope, and gives the reader a fresh, compelling story with irresistibly complex characters.

Christian is a man in danger of losing himself in his need to destroy Bolkhov. Phineas Granville, Earl of Ashmore (hero of Written on Your Skin, 2009) cautions Christian that Kit Stratton was never meant for the role that he has assumed. “But don’t mock the man who won those medals. God knows he earned them . . . . And I hope to see him again, soon enough. For his scope and promise are far larger than this passing lunacy with Bolkhov. And I won’t allow you to forget that.” Christian himself realizes that he is consumed with thoughts of murder. His obsession means that he is willing to use people as tools, even resorting to blackmail, to reach Bolkhov. His moral compromises make him a less than likeable hero at times, but they also make him a layered, fascinating character.

Lilah is also an extraordinary character. Although she is certainly not the first thief heroine in romance, she is refreshingly different in her origins, in her self-knowledge, and in the strength she displays in standing up to two strong men that she loves, Christian and her Uncle Nick. Her budding friendship with Catherine also adds dimension to both characters. When she and Christian encounter danger and Lilah proves herself an able partner, Christian thinks that she “deserved his fascination.” She deserves the reader’s fascination as well.

Duran deserves additional accolades for creating sexual tension that sizzles. A look, a touch, a word serves to seduce lover and reader alike. Lilah recognizes Christian as a genuine rake rather than the usual imitation: “He aroused her curiosity as much as her appetite, all the while reiterating that the choice belonged to her. . . . He made erotic poetry of her right to choose.”  (I confess that last sentence is one of my favorites.)  The tension culminates in love scenes that reveal these characters in all their vulnerabilities. For readers suffering from an overdose of insert-sex-scene-here romances, Lady Be Good is the perfect antidote.

Lilah and Christian are not the only captivating characters in this book. The icy Catherine Everleigh and the rough and ruthless Nick O’Shea both capture the reader’s interest. Fortunately, the next book in this series, Luck Be a Lady, features Catherine and Nick. It releases on August 25, and I am impatiently waiting to read it.


Duran won her first Rita a few weeks ago. This book is just one example of why her readers were thrilled to see her win even though they may have wondered why it had been delayed so long. If you’re read Duran’s other books, I’m sure this book is already on your radar. If you love historical romance and haven’t read Duran, you owe it to yourself to remedy that omission ASAP. Lady Be Good is a great place to start. I give it my highest recommendation.