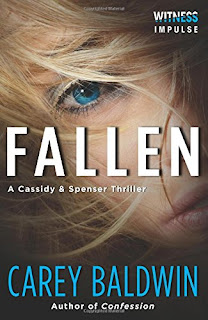 Fallen is Carey Baldwin’s second book in her Spenser and Cassidy series, which chronicles the adventures of FBI agent and profiler Atticus “Spense” Spenser and Dr. Caitlin Cassidy, a forensic psychiatrist and FBI consultant. In Fallen, Spense and Caity delve into the underside of the glitz and glamor of Hollywood when a string of homicides in L.A. baffle the local police and they’re called in to help solve the case.

The action in Fallen kicks off when the body of a high price prostitute falls out of a hotel window right onto Hollywood Boulevard.  Soon after, other bodies are found with the same M.O. dubbed the “Fallen Angel Killer” by the press because of the way the killer displays the bodies of the victims, and the physical similarities between them. Spense and Caity scramble to try to make sense of the killer’s motive and how he’s finding his victims. The stakes are raised even higher when the Fallen Angel Killer kidnaps the next victim, and threatens to kill her unless “Celebrity X” publicly confesses their sins and issues an apology within 48 hours. So, the race is on to figure out who Celebrity X is and get them to confess, or find where the Fallen Angel Killer has hidden the victim.

Carey Baldwin writes heart-pounding romantic suspense that keeps the reader guessing and turning the pages.  I was fascinated by her exploration of the seedy underside of our celebrity, fame-crazed culture and the toll it takes on those caught in its trap.  The villain was a total surprise to me, but it totally made sense once all of pieces of the puzzle came together.  Baldwin had cleverly laid out all the clues for the reader to figure out, but not so blatantly that the solution was too obvious.  Baldwin’s medical and psychology background comes to the forefront and allows her to add an appealing richness and depth to the story by really diving into the killer’s motivation and psychological makeup to explain why he/she is so driven to kill. The writing is smart, fast-paced, and absorbing with a sly sense of humor. Baldwin has a great talent for drawing her readers into the story, and making them enjoy every minute of the pulse-pounding ride.

With romantic suspense novels, there is always the risk that the suspense will overwhelm the romance. In many RS novels, the love story gets lost in the suspense and mystery.  That is not the case in Fallen.  Spense and Caity’s relationship is definitely front and center in this book.  Baldwin deftly deals with the lingering fallout from the events of Judgement, the first book in the series, and uses that to move Caity and Spense’s relationship forward.  Caity has some scars and baggage to deal with due to events in her past, and I love how understanding Spense is and how determined he is to make things work between them. The two of them continue to work on their communication skills and growing attraction. The deepening of the emotional bond between them is wonderfully done and I loved them working through the bumps in their relationship.  Even though the relationship hasn’t gotten 100% physical, the sense of them becoming an even more solid team makes the reader invested in them as a couple and the series as a whole.

Signs indicate that Caity and Spense are off to Dallas in the next book. I can’t wait to find out what’s in store for them next!  I highly recommend Fallen, and any of Carey Baldwin’s books, to anyone who enjoys a great romance suspense novel with great writing, spine-tingling plots, and compelling characters that will stay with you long after you get to the end.