Review - - The Color of Light 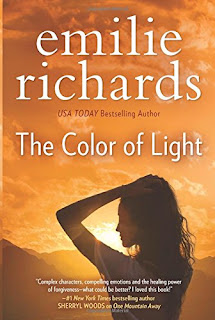 After speaking at a rally for the homeless where she had a rather too close and uncomfortable encounter with one homeless man, the Reverend Analiese Wagner returns to the Church of the Covenant in Asheville, North Carolina, where she serves as senior pastor, to find a homeless family camping in the church parking lot. Ana must make a decision. Should she allow the family to stay in the empty apartment on an upper floor of the parish house, even if she suspects that some of the executive committee members of the church council will not approve? Deciding to do what she knows to be the right thing and worry about permission later, she moves the family of four into the small apartment.

With the position of assistant pastor vacant, all the pastoral responsibilities have fallen on Ana, who is feeling overwhelmed by the demands. These feelings are exacerbated by contentious committee meetings, some church members’ lingering questions about the fitness of a female pastor, and Ana’s own consciousness of her looming fortieth birthday. Although she is devoted to the other members of Goddesses Anonymous, a group of women committed to using the resources left to them in the will of Charlotte Hale to help other women (One Mountain Away), Ana is better at listening to their problems than sharing her own, thus adding loneliness to other pressures.

The church agrees to allow the homeless family to remain in the apartment for a period of two weeks, but the decision is not unanimous. Ana knows that those opposed to the presence of homeless people on church property will not accept defeat quietly. Her heart is moved by the plight of the Fowler family: Herman “Man” and his wife Belle have almost surrendered to despair after having lost their jobs, their home, and their very identity. Belle’s health has been jeopardized, and both parents fear their children being taken from them. Fourteen-year-old Shiloh, highly intelligent and competent, has become the de facto head of the family, fighting to keep them together and to provide schooling for her younger brother Dougie who has ADHD. Ana knows that temporary shelter does little to address the family’s problems, and to her other responsibilities, she adds efforts to enroll the children in school, to find health care for Belle and work for Man, and to challenge her congregation to supply the Fowlers’ needs beyond shelter. Even well-intentioned church members sometimes act insensitively, leaving their pastor to soothe injured spirits. And all the while Ana is pushing to extend the time the Fowlers have in the apartment.

Help comes from a surprising source when Isaiah Colburn reappears in Analiese’s life. It was Isaiah, then a young Roman Catholic parish priest in San Diego, who mentored Ana at a crucial time in her life.  Widowed after several years of a meaningless marriage and finding success as a broadcast journalist increasingly empty, Ana was riveted by the way Isaiah lived out his calling in active service to his poor congregation.  It was he who recognized her questioning heart and urged her to listen for answers; it was he who encouraged her to attend seminary. It was he with whom Ana fell hopelessly in love.

Isaiah is a much needed ally in helping the Fowlers. He befriends each of them; even the prickly Shiloh likes him. However, Ana is not sure why Isaiah is in North Carolina, and he is in no hurry to provide answers, perhaps because he is still struggling with his own questions. Regardless, Ana is certain that his being there means changes in her life. Is she prepared for all the changes Isaiah’s presence could bring?

The Color of Light is the fourth book in Richards’s Goddesses Anonymous series (after One Mountain Away, Somewhere Between Luck and Trust, and No River Too Wide). In the earlier books, Analiese Wagner is the wise, compassionate minister to whom others turn for comfort and advice. In this book, she is more fully revealed as a complicated, flawed character with wounds, uncertainties, and battles that make her a more interesting and more authentically human character.

Her relationship with Isaiah is a fascinating, layered one. Ana recognizes that part of his attraction in the beginning was that Isaiah was safe to love. Scarred from a marriage to a man who was habitually unfaithful and chronically self-absorbed and weary of other men who view her only as a potential sexual conquest, Ana finds in Isaiah someone who sees her as she is, values her, and imposes on her only the expectation that she be fully herself. Her longing for him when she is overwhelmed is as much for that safe mentor and confidant as it is for the man with whom she is in love. Reconnecting with him makes her newly aware of how much she has missed him and confirms her feelings for him. Nevertheless, when Isaiah confesses that he cut himself off from her because his feelings for her were in conflict with his vocation, Ana is not fully comfortable with the change in their friendship.

Isaiah too is a wonderfully complex and deeply human character. His crisis is less a crisis of faith than a crisis of calling. Unhappy in the administrative position in which the Church has placed him, he questions whether he is fulfilling God’s purpose for his life or merely obeying orders from the Church hierarchy.  He is also determined that his feelings for Ana not be his reason for leaving the priesthood. He addresses this concern directly:  “I knew this couldn’t be about you, Ana, that my decision had to be independent of what I’d felt for you all those years ago and might feel again.”

Because The Color of Light is women’s fiction rather than conventional contemporary romance, there is no guarantee of an HEA for Ana and Isaiah. The tension between an anticipated HEA and the very real and not always predictable obstacles to it is sustained until the very end. The possibility that one form of happiness must be sacrificed to attain another keeps the reader eagerly turning pages. Consequently, the reader’s engagement with the story reaches a rare intensity.

Although the novel is not an inspirational, it addresses key theological issues and challenges readers who share the faith of the characters to contemplate the way they live out their beliefs. I found myself wishing that Ana could deliver her sermon on the Good Samaritan at my church. And I will be sharing Ana’s words about the church: “The church is not a work of art. It's difficult and sometimes dirty and disappointing, but a church is about the people we befriend, the love we give, the difference we make. A church is the unflinching light of day and the rainbow-colored light of hope. We need both. The real life of a church is always beyond the walls of its sanctuary.”

I’ve been reading Emilie Richards’s books for more than two decades. The ER keepers on my bookshelves include category romances, a pair of unusual paranormals, a handful of mysteries, more than a dozen books from four series, and a single title (Prospect Street) that is on my all-time top 100 list. I’ve loved every book in the Goddesses Anonymous series, but this one is special. It’s going on that list with Prospect Street.

If you are a fan of books in which the romantic and the real intersect, books that provide a rich, emotionally satisfying reading experience, or books that leave you thinking long thoughts, I highly recommend this book.