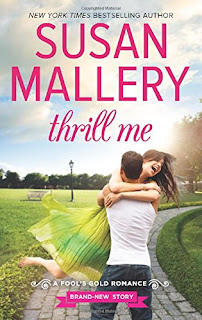 Mayor Marsha is up to her usual inscrutable ways in this eighteenth addition to Mallery’s popular Fool’s Gold series. Ten years ago, Maya Farlow fled Fool’s Gold and Del Mitchell’s promise of forever love, claiming both Del and his hometown bored her. Now she’s back. Even though she failed to realize her dream of making a name for herself as a network anchor, she’s excited to be back in Fool’s Gold, establishing a closer relationship with her step-brothers and looking forward to her new job as the city’s director of communications. Her first assignments include dealing with the butt contest—bare, male butts-- on the cable access show of septuagenarians Eddie and Gladys and creating a new video campaign to draw tourists to Fool’s Gold. Maya believes the former task will be the more difficult; after all, her last job was senior producer for a local news station in LA. But then she learns that her collaborator on the video project is none other than Del Mitchell, her first love, or at least an older, scruffier, and sexier version of him.

Del, oldest of the five sons of Ceallach Mitchell, renowned glass artist, and his wife Elaine, is back in Fool’s Gold for his father’s sixtieth birthday celebration.  Once Del thought his life would fall into the predictable pattern of generations of Fool’s Gold citizens: marriage, family, and work in the family business. Instead, after Maya dumped him, he too left Fool’s Gold, made a name for himself in extreme sports, invented a better board for skysurfers and founded the company that made them, and sold the company for a bundle. He’s still working on his next step, but in the meantime, he’s in Fool’s Gold for the summer and content to work on the video project with Maya.

Maya and Del work well together. They are both intelligent, creative people, and they find one another interesting as well as attractive. The chemistry between them is still strong enough to threaten their separate resolutions to remain just friends, but they also really like spending time together. Their renewed friendship is genuine both before and after they become lovers for the second time. But the Mitchell family has a history of keeping secrets, and Maya finds herself caught in their secrecy. When the secret to which Maya is a party is revealed, her relationship with Del is a casualty. Can Del for whom honesty has become an obsession forgive Maya for lying to him?

Characterization is Susan Mallery’s greatest strength. I count on her creating characters whom I like and find believable, interesting and engaging, and, with few exceptions, she comes through with flying colors. Maya and Del are both wonderful characters. In the hands of a less deft writer, they could have been the worst kind of stereotype: youthful lovers parted and pining away for their lost love until they reunite and are restored instantly to a state of perpetual lust and undying love. Instead, Mallery shows us that, despite the pain both Del and Maya suffered, they gained much from their decade apart. They developed skills, experienced life, and explored possibilities professionally and personally. When they reunite, they are both adults, developmentally as well as chronologically. They don’t exchange one look and fall into bed. Their relationship develops as they rediscover one another, and the reader understands why they are a match as their compatibility is shown to consist of more than the right chemistry.

But as much as I liked Del and Maya as individuals and as a pair, I disliked the predictability of the big conflict. From the moment Maya agrees to keep Elaine Mitchell’s secret, even a less than perceptive reader knows that the breakup with Del labeling Maya as dishonest is on the way. All that saves this part of the plot from disaster in my opinion is that Del realizes his error on his own. Would that more heroes experienced his epiphany: “He didn’t have to agree with what she had done, nor did he have to like it. But if he accepted her reasons, then he had to admit that within that context, she’d done the right thing.” I believe a long and happy life awaits these two. And I believe a satisfying read awaits the reader willing to move past the predictability.

Next up for Fool’s Gold fans is Marry Me at Christmas (September 29), but I hope 2016 will bring the stories of more Mitchell brothers. Aidan appears to be another of Mallery’s hunky commitment phobes, but Nick, a bartender with the promise of artistic genius, is the one that I find most intriguing. Then there are the twins. So, four Mitchell books next year maybe—or so I’m hoping.  Any author who has me signing up for books 19-22 in a series deserves kudos.