Cover Reveal - - The VIP Doubles Down


I am delighted to welcome Nancy Herkness to the Romance Dish today! Nancy is here to unveil the cover of the third book in her wonderful Wager of Hearts contemporary romance series, The VIP Doubles Down. I have loved the first two books in this series, The CEO Buys In and The All-Star Antes Up, as well as the recently released novella, The Irishman's Christmas Gamble, and I'm counting the days until we finally get Gavin's story on April 18, 2017. Without further ado, here's Nancy!


I am so excited to share the just-completed cover design for THE VIP DOUBLES DOWN with everyone at the marvelous Romance Dish. The hero, Gavin Miller, is a bestselling author (and billionaire) with writer’s block, so I feel his issues in a very personal way. I asked my publisher for a cover with a dark, brooding, sexy hero in a setting the captures both his wealth and his profession as a writer. And wow, did they ever deliver!

So with a drumroll, here is the cover for Gavin’s story, the final billionaire in the Wager of Hearts series: 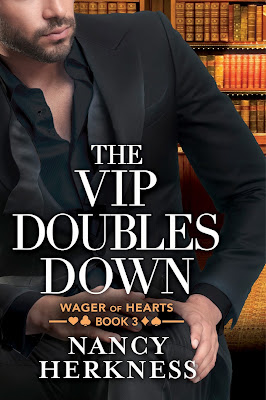 You can pre-order it on Amazon here: http://amzn.to/2fvlOop

Here’s what the book is about:

In the witty, sizzling finale to award-winning author Nancy Herkness’s Wager of Hearts series, a haunted writer conquers his demons with the help of a feisty muse and a passion that doesn’t play by the book.

Gavin Miller, the billionaire author of a bestselling thriller series, struggles with a grim secret: he hasn’t written a word in over a year.

Writer’s block is killing his spirit and jeopardizing his contracts with his publisher and his Hollywood producers. Prodded by his agent, Gavin reluctantly agrees to see Allie Nichols, a sassy physical therapist tasked with treating the novelist’s severe neck and shoulder pain—and maybe his writer’s block, too.

The tempestuous Gavin and no-nonsense Allie soon find themselves entangled in a steamy affair that sparks Gavin’s creativity again. But their manipulative ex-lovers and Gavin’s lingering childhood scars threaten their happily ever after. Can Gavin and Allie find their way to love when the stakes are high and the obstacles are overwhelming?

To celebrate my beautiful new cover, I am giving away two autographed copies of THE IRISHMAN’S CHRISTMAS GAMBLE, the newly released novella in the Wager of Hearts series. Comment below to be entered in the drawing! 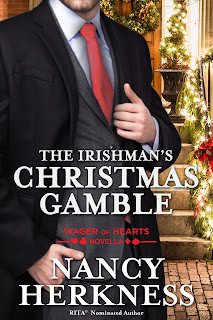 Having risen out of the slums of Dublin to build a multinational gourmet chocolate business, Frances “Frankie” Hogan has settled for being respected, envied, and rich beyond belief…but never happy. She has built a secure home within the walls of the exclusive Bellwether Club, a place she established for self-made billionaires like herself. She’s convinced that nothing can ruffle the calm of her well-ordered, though lonely, world—until her past, in the form of Liam Keller, shows up at her door.
European soccer sensation Liam Keller has carried a torch for Frankie since their years together in their hard-scrabble Irish neighborhood. Frankie was the one who fed his dreams and pushed him to reach for the elite level of his sport, even as she kept him at arm’s length. Their ambitions launched them in different directions, but now Liam finds himself in New York as a coach to an up-and-coming professional American soccer team.Liam’s feelings for Frankie have never faded, but their years apart have brought complications, including a secret that could drive Frankie away. Only a Christmas miracle can help Liam convince the woman he adores to finally gamble on love.