Please give Maria Lokken a warm welcome to The Romance Dish review team. Maria shares my love of romance novels and she and her sister are the reason I began reviewing them. I'm delighted to have her share her thoughts with us here at the Dish! ~PJ 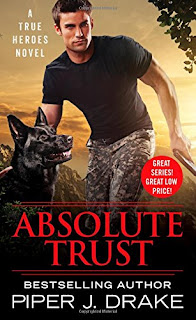 If you like your romantic suspense filled with tension, a bit of mystery and a relationship that sizzles – this is a book to put on the top your to be read pile.  In book three of the True Hero Series, Absolute Trust quite literally begins with a bang and then takes you on a thrilling ride through danger and a slow build toward a happily ever after.

Brandon Forte is ex-military who now runs a kennel training military dogs.  Sophie Kim is an accountant who has known Brandon since grade school. While they’ve both had strong feelings for each other, his absence coupled with their inability to open up about how they really feel has kept them at arm’s length despite their desire for one another.

When Sophie’s life is threatened, Brandon jumps into action to protect her.  And this is where the author really makes you turn the pages.  She has created a character the reader becomes invested in.  Behind his incredibly strong exterior is a man who has the tenderness to envelop the woman he loves and the intelligence to keep her safe despite the constant threat she is living under. Brandon is a hero that is not only multi-dimensional but whose feelings unfold in such a way that you find your heart racing just a little bit faster as you move through the book.  And if that isn’t enough – there’s the dog.  Yes, the German Shepard named Haydn that Brandon is training. His love for animals, and particularly this dog, gives you one more reason to want Brandon to leap off the page and into your living room; even for just a minute.

The author keeps you guessing as to who is trying to kill Sophie or if it’s really Sophie they are after.  Amidst the fears of being hunted down and killed, the relationship between Brandon and Sophie is a slow burn as they dance around their feelings.  When the fire is finally ignited it’s a very worthwhile love story with a lot of action.

Maria is an award-winning television producer.  Currently as Executive In Charge of Production at Jarrett Creative, she’s helmed the production of Killision Course and The Haunting of on Lifetime, Boston’s Finest on TNT and Alaskan Women Looking for Love on TLC to name a few.  She’s had a life-long love affair with romance books and would rather be reading than doing almost anything else.