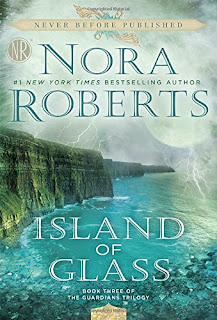 The final in the Guardians trilogy, Island of Glass, a part-fairy tale, part-paranormal adventure series, takes place in Ireland (which admit it, Nora does great work there). The werewolf-archaeologist, Dr. Riley Gwin, and the Irish warrior turned immortal, Doyle, find themselves the only ones not paired off in the sorcerer’s castle. Of course, much like the couples, Riley and Doyle have bigger things to accomplish than scratching any itches—no matter how tempting the itch may be. These six are definitely on what seems to be a Mission Impossible.

Nerezza, the Evil One, nearly conquered the six at the island of Corfu where they rescued the water star and hid it in safety with its sister the fire star, but their efforts will be for naught if they do not find the final star, the star of ice, and return all the stars to their home on the Island of Glass. Which, according to legend, may be challenging to find since the island appears and disappears at will. Pfft, details.

Riley and Doyle research for clues in Bran’s massive library (which I want to live in), and the longer they are around each other, the more they can’t help but…itch. But an immortal like Doyle, who has already watched two wives die, is not going to entangle himself with a woman as passionate and intoxicating as Riley. (Besides, don’t wolves mate for life?)

Of course, you know as well as I, a celibacy stalemate is never destined to remain long in a romance as sizzling as Nora’s; and soon, the pair of them are bed-deep in lust and heart-deep in love. (Though of course, only one of them is more willing to admit the latter. Two guesses who.)


The world-building and scene layering for the Guardian trilogy, and especially for the Island of Glass where you meet the goddesses who created the stars, is exquisite and enthralling. This series definitely took a number of beloved fairy tales and mythology and blended them up into a frothy, but intoxicating brew that on the surface can seem sweet and simple, but is dark and complicated—and will knock you on your ass if you’re not careful. Read it for the sweetness that will keep you drinking, but do go back and admire the skillful layering that Nora made look so easy.