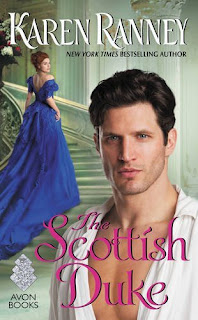 The Scottish Duke by Karen Ranney surprised this reader from the very beginning. We are introduced to all the main characters in very short order which sets the pace for this book. Lorna is a maid in the household of the dangerously handsome and aloof Duke of Kinross, Alex Russell. Lorna is no ordinary maid. She took this position because she was desperate to finish her father’s work in cataloging the herbal remedies of Scotland. The duke’s estate provides ample resources for gathering, growing and making up these remedies.


Given all that, Lorna is more than curious of the duke’s penchant for not being disturbed by anyone or anything. He allowed himself to be open to others once and was ultimately betrayed. A hard lesson but a necessary one. In order to quell her curiosity, she decides to take a once in a lifetime opportunity and attend the Duke’s masquerade. She wants a chance to meet the duke as his mysterious equal.

Dressed as Marie Antoinette, she captures his attention as soon as he sees her across the ballroom. She intrigues him and almost makes him forget his ire at losing out on an award from the Scientific Society of Scotland. His interest in forensic science is unconventional for a duke. Alex prefers his exploration into the burgeoning new world of fingerprinting. They end up in a secluded room and overcome by the her beauty and the mystery of who she may be they make love. She is a willing participant despite her innocence. She flees.

However, their encounter leaves her with child and she finds herself put out before it becomes evident to everyone. She is, by no means, a fortune hunter looking to snare herself a duke.

She ends up in dire living conditions open to the scorn of the people she now lives around. Her friend takes matters into her own hands and alerts Alex’s mother. The Duchess of Kinross is by no means a conventional duchess. She cares not for the conventions of polite society where the welfare and happiness of her son is concerned. She takes a very open mind for someone of this age towards Lorna and the fate of her unborn child.


If I were to describe this book in one word, that word would have to be unconventional. The duke’s interest in forensics. A duke not afraid to get his hands dirty. A young woman determined to finish her father’s life’s works. A determination not to burden a duke with a bastard. A mother of a duke who puts happiness and joy for her family first. It’s her hand in getting Alex to marry Lorna minutes before their son - now an heir - to be born on the right side of the blanket. Unconventional in how neither the duke or his mother act as spoiled members of the ton. They can do what they want. They are a ducal family going back hundreds of years. And it’s Scotland!

There are villains aplenty in this book. Lecherous relations who really give themselves more consequence than deserved. But, again, an unconventional household that allows a libertarian uncle and the bitter sister of the duke’s faithless wife who died giving birth to a stillborn child who may or may not have been the duke’s child.

Alex and Lorna’s attraction is there from the beginning but their love grows despite less than ideal circumstances. They weather censure and treacherous betrayals. The bond of their child keeps them together and helps to grow their love. That is why I give this book four out of five stars for a book anyone would take as conventional. But its unconventional characters and turns are a very pleasant surprise.