On Second Thought - - One Wish 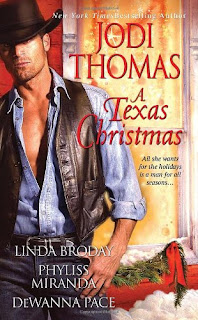 It’s December, so I am rereading favorite Christmas books. Most of my Christmas rereads are traditional Regencies, European historicals, or contemporary romances. This one is different because it is an anthology of Western romances, not a subgenre in which I read widely. In fact, I bought the book when it was released five years ago solely for this lead story by Jodi Thomas, one of my auto-buy authors. Rereading it this year, I again found 1887 Texas as comforting and Christmassy as Regency and Victorian England and small-town contemporary America.

Sam Thompson and Margaret Allison are outsiders in Kasota Springs, Texas at opposite ends of the town’s social scale: Sam, a farmer and a member of a notorious family who keeps to themselves, and Margaret, the educated wealthy proprietor of the mercantile she inherited from her parents. It is Christmas Eve when Sam overhears a trio of ruffians planning to rob and rape Margaret, he would like to ignore the threat; but he can’t do so because of a bond formed years ago between two six-year-olds, who even then were outsiders.  Sam saves her and is injured in the process. The leader of the thieves escapes, and his companions warn the sheriff that Boss Adler never leaves witnesses and will certainly return to kill Maggie. When the sheriff expresses doubt that anyone in town will have Maggie as a guest for fear of their own lives, Sam takes her to his home where no one is likely to find her.

The isolation of Sam’s home is exacerbated by the blizzard, and an openness and intimacy develops between Sam and Maggie and Sam’s two-year-old son Web, a son almost no one knows exists. The two adults are soon caught up in a game of pretense that they are married, finding in the temporary life they have created the feel of belonging to someone for which they both long. They move toward one another in incremental stages with the consciousness of all that threatens their small, increasingly dear world waiting just beyond the perimeters. A price will be exacted before they can make pretense real and claim their HEA along with their planned Christmas that will be no less wondrous for being delayed.

Sam and Maggie are far from typical romance protagonists, but they are no less likeable for that. They have both been essentially loners for all their lives. Maggie’s parents sent her away to school when she was still very young, but she was as alone there as she was in Kasota Springs. Sam’s grandfather was a distant man, and his late wife was a woman too broken by her father’s abuse to be a companion. Sam and Maggie’s finding each other and their love for Web has a deserved sweetness that is deepened by the passion they share.

Westerns were my dad’s top reading choice, and I read many of his paperbacks growing up. Thomas’s story, although the romance is central, also had enough elements of the traditional Western that reading it evoked a bit of nostalgia for another genre that is part of my reading history. I’m not surprised that it won the Rita for Best Novella in 2012.

The other stories in the anthology are also well worth reading.

·       DeWanna Pace’s Naughty or Nice pairs Anna Ross, a female saloon owner, and James Elliott III, a botanist in search of perfection. She saves him from the snowstorm, they gatecrash a Christmas party, and they discover first impressions may be deceptive.

·       Linda Broday’s The Christmas Bell is a cross-class romance between Sloan Sullivan, a rancher who braves the winter elements to bring help to passengers on a stranded train, and Tess Whitgrove, a wealthy spinster by choice who is determined to marry for love. The stopped train is the site of Christmas miracles from a newborn baby to transformed hearts.

·       Away in a Manger by Phyllis Miranda is the story of the town’s blacksmith, gruff and grumpy Randall Humphreys and his unexpected visitors, Sarah Callahan and her children, twins Damon and Addie Claire, who are forced to seek shelter from the storm. Rand is a fearsome giant of a man with a hidden gentle spirit who turns out to be exactly what Sarah and her children need for Christmas and ever after.

Recurring themes of forgiveness and redemption make all the stories wonderful Christmas reading. If you like Christmas romances I highly recommend you add this anthology to your TBR list.

Email ThisBlogThis!Share to TwitterShare to FacebookShare to Pinterest
Labels: A Texas Christmas, Jodi Thomas, Novella, On Second Thought, One Wish