Spotlight on Gena Showalter and The Darkest Torment 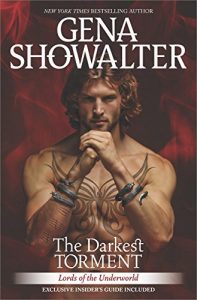 Driven to his death by the demon of Distrust, Baden spent centuries in purgatory. Now he's back, but at what cost? Bound to the king of the underworld, an even darker force, he's unable to withstand the touch of another…and he's quickly devolving into a heartless assassin with an uncontrollable temper. Things only get worse when a mission goes awry and he finds himself saddled with a bride—just not his own.
Famed dog trainer Katarina Joelle is forced to marry a monster to protect her loved ones. When she's taken hostage by the ruthless, beautiful Baden immediately after the ceremony, she's plunged into a war between two evils—with a protector more dangerous than the monsters he hunts. They are meant to be enemies, but neither can resist the passion burning between them…and all too soon the biggest threat is to her heart.
But as Baden slips deeper into the abyss, she'll have to teach him to love…or lose him forever.

“There, there, poppet.” William gently wiped Gillian’s brow with a damp rag. “You’ll heal. That’s an order.”
She opened boulder-heavy eyelids. He sat beside her, his image blurry, as if a gossamer mist surrounded him. Her mind supplied the details she needed: he was the most beautiful man ever born, with hair blacker than any night and eyes bluer than any ocean.
“What’s wrong with me?” Her voice was weak and raspy, the words nearly impossible to understand.
Thankfully, he wasn’t human, his hearing better than most. “Something supernatural. But I’ve got the best immortal doctors in the world running tests.”
Yes. She remembered poking and prodding, William snapping, “Be gentler or lose your hand.”
“I want to go home,” she said. She wasn’t just weak and pained; she was weirded out. Her every cell felt as if it had sprouted legs and now crawled through her veins. A familiar setting would help.
She didn’t have the strength to get up and walk to the bathroom. She had to have help—William’s help—or she had to use a bedpan.
A freaking bedpan. Oh, the humiliation!
She wanted the girls.
Cool fingers sifted through her hair. “Baden returned to the fortress, and his temper is…unstable. I know better than most what he’s capable of doing. I experienced the same—” He quieted, then smiled a smile devoid of humor. “You’re safer here. This realm is hidden. No one comes or goes without my knowledge. Sleep now, poppet.”
No, no. Not ready to drift away just yet. She wanted more time with him before they were separated forever…
“You’re not sleeping,” William said.
Sweet William. From the first moment she’d met him, she’d been drawn to him in a way that both scared and excited her. He was just so wonderfully mesmerizing. And powerful. And wicked and smart and sexy and kind—to her. Always to her. His friends, too, but only sometimes.
His enemies, well, they died badly.
Men feared him, and women craved him like a drug. When he smiled, panties dropped. Or melted off. She wasn’t sure which, only knew he worked the situation to his advantage. The guy slept around, though he never stuck around. Because he always came back to Gillian.
As much as she hated the thought of him getting naked with another woman, she never ever never ever wanted to have sex again. She despised everything about the act. The smells, the sounds, the sensations. The pain…the humiliation…the helplessness…


The thought of joining her body with another person’s made her break out in hives, not shiver with desire.

Gena Showalter is the New York Times and USA TODAY bestselling author of the spellbinding Lords of the Underworld, Otherworld Assassins, and Angels of the Dark series, as well as two young adult series--Everlife and the White Rabbit Chronicles--and the highly addictive Original Heartbreakers series.  In addition to being a National Reader's Choice and two time RITA nominee, her romance novels have appeared in Cosmopolitan (Red Hot Read) and Seventeen magazine.  Her books have been translated in multiple languages.
Learn more about Gena, her menagerie of rescue dogs, and all her upcoming books at:
genashowalter.com or Facebook.com/genashowalterfan