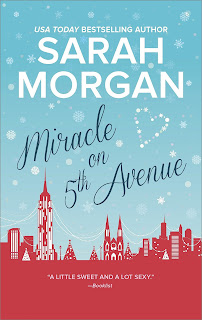 Sarah Morgan gives her readers an opposites-attract Christmas tale featuring Eva Jordan, the hopeless romantic among the three partners in Urban Genie, an events and concierge service, and Lucas Blade, a cynical widower and celebrated crime writer in this third novel in her From Manhattan with Love series.

Eva Jordan is a natural optimist who loves Christmas and all the trimmings, especially the snow, but this year she is still struggling with grief over the loss of her grandmother just over a year ago. Eva’s friends are worried about the dimming of her usual ebullient spirit. Because Eva doesn’t want them to worry about her and she doesn’t want to feel that her grandmother would be disappointed in her, she determines to reclaim the Eva she once was, starting with her current job. Her first client and good friend Mitzy has hired her to decorate the Fifth Avenue penthouse apartment of international bestselling crime writer Lucas Blade, who happens to be Mitzy’s grandson. Lucas is in Vermont, and Eva has the weekend to fill his apartment with Christmas and his refrigerator with prepared meals as per Mitzy’s instructions.

The only problem with Eva’s plan is that Lucas Blade is not in Vermont. He is in his New York apartment. Since his family and agent think he is in Vermont, his apartment is the perfect spot for him to retreat and brood in solitude. He can’t escape the pain that has been a part of him since his wife’s death three years ago, and he can’t escape the fear that the writer’s block that has plagued him since he started his latest book is a permanent resident. Thus, he might as well be in New York as anywhere, hating Christmas and obsessing over the fact that he has not a single idea for his next, much anticipated book—a book that is due to his editor in three weeks.

Eva and Lucas are opposites in many ways. Their differences are clear from the moment of their romantic comedy movie-worthy first meet. He is the Scrooge in this Christmas story; both personal experience and his writing encourage him to saturate himself in gloom and doom. Eva’s naturally optimistic temperament is reasserting itself. He mocks her sentimental views, and she tries to push him past his cynicism. Lucas is genuinely concerned about Eva’s safety when he insists she remain in his apartment through the snowstorm, but his reasons for wanting her there soon become more complex. He feels more for her than he wants to admit, and he is excited that she has inspired the idea for a character he can use to move past his writer’s block. Despite their differences, the two have their experience with loss in common, and they learn to genuinely like one another. Then there is the sexual tension that simmers between them. All the elements for an HEA are in place, but Eva still has to learn that the character she has inspired is a serial killer. And, more seriously, Lucas has to learn to let go of his fear.

Often I have problems buying into romances in which the hero and heroine know each other for a few days or a few weeks and are almost instantly ready for an HEA but the isolation of the snowstorm and the resulting proximity of Eva and Lucas make their swiftly developing intimacy credible, as does Eva’s open, trusting nature. Sarah Morgan excels at creating characters I want to have long chats with over coffee and whose happiness matters to me. They have that kind of dimensionality and likeability. Eva and Lucas were no exception. Granted, I wanted to give Lucas a good shake a time or two, but he makes up for his mistakes beautifully.

Another of the things I liked best in Miracle on 5th Avenue was the conversations between Eva and Lucas. Their banter was terrific, but they also say meaningful things to one another. Morgan is particularly good at using their words to make the reader aware of their persistent differences, as she does in this exchange.

“You matter to me. But you want the fairy tale. I could never give you that.”

“Oh, Lucas.” She felt a rush of sadness and mixed in with the sadness was frustration that he still didn’t get it. “The fairy tale isn’t Prince Charming or magical unicorns. It’s love. What I want is to love someone, and for them to love me back. For me, that’s the fairy tale.”

“Love isn’t what you think it is.”

Readers who have followed the From Manhattan with Love series will delight in seeing appearances from Paige and Jake (Sleepless in Manhattan) and Frankie and Matt (Sunset in Central Park) as well as seeing the lovable Eva meet her match. But this book can be read easily as a standalone. Whether you have read the first two books or not, if you like contemporary romance that is not only sexy but also deeply romantic or Christmas love stories that are as satisfying and seasonal as spicy hot chocolate, I highly recommend Miracle on 5th Avenue.