I've been a fan of Sabrina Jeffries books for years and have many of them on my keeper shelves but the stories in her current Sinful Suitors series are among the best I've read from this talented author. Seems others agree with me as book #2 in the series, The Study of Seduction is a finalist for this year's prestigious Romance Writers of America® RITA® Award for Best Historical Romance:Short (read my 5-star review). Fans of this series will recognize Niall, the hero of Jeffries' upcoming The Pleasures of Passion, as the brother who gave up everything to protect his sister, Lady Clarissa, the heroine of The Study of Seduction. I've been eagerly anticipating his story! 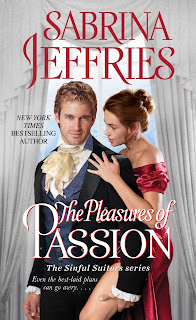 When Niall Lindsey, the Earl of Margrave, is forced to flee after killing a man in a duel, he expects his secret love, Brilliana Trevor, to go with him, or at the very least wait for him. To his shock, she does neither and sends him off with no promise for the future. Seven years and one pardon later, Niall returns to England disillusioned and cynical. And being blackmailed by the government into working with his former love to help catch a counterfeiter connected to her father doesn’t improve his mood any. But as his role as Brilliana’s fake fiancé brings his long-buried feelings to the surface once again, he wonders who is more dangerous—the counterfeiter or the woman rapidly stealing his heart.
Forced to marry another man after Niall was exiled, the now widowed Brilliana wants nothing to do with the reckless rogue who she believes abandoned her to a dreary, loveless life. So having to rely on him to save her father is the last thing she wants, much less trusts him with....But as their scheme strips away the lies and secrets of their shared past, can she let go of the old hurt and put her pride aside? Or will the pleasures of their renewed passion finally enable them both to rediscover love?


The Pleasures of Passion
Excerpt


By the time Niall left the library with Bree, the gentlemen were coming down the hall to join the ladies in the drawing room.
He stared at her, a lump catching in his throat. God, she was beautiful in that forest-green dinner gown, which skimmed her breasts with loving care and left far too much of the rest of her to the imagination. He would love to see what lay beneath the froth of petticoats that women wore these days. He had no doubt she would be a Botticelli indeed.
Well, except for her prudery and her absurd worries that he might be plotting to get her into his bed, that he might have plotted to get her there years ago. That angered him. The fact that she would even believe—
Don’t think about that right now, man. You’re supposed to be happily anticipating announcing your engagement, remember?
Right. To a woman who looked as if someone had just stolen her joy. How annoying. Years ago she’d refused to marry him, and now that she had her chance to get her hooks in him again, she balked?
That made no sense. And was rather insulting. He’d make any woman a good husband, blast it. Not that he wanted to be one to her, but still, she ought to be running after him like the other females in society.
Unless she’d truly loved Trevor.
The very thought of it was like an itch under his skin that he couldn’t scratch. He hadn’t been able to make her love him enough to leave her family behind for him, but Trevor had succeeded?
Although her point about her mother’s being unable to go abroad had been valid, he supposed. Still, he found it hard to believe that her mother had been her only sticking point. If so, Bree would have waited for him until her mother died. Then she would have sent word.
But she hadn’t even waited a full year before marrying some other fellow. Deuced bastard. If anything showed that she hadn’t truly loved him, that did.
Well, this would be over soon enough.
He halted at the threshold of the drawing room to gaze down into her grim face. “Are you ready for this?”
“No. But waiting won’t make me any more ready.”
“You might want to smile. You’re announcing your impending wedding, but you look like you’re going to your execution.” He forced a teasing note into his voice. “You may not be aware of this, but I am considered eminently eligible.”
That softened her features. “And modest, too.”
“Why should I be modest?” he quipped. “I’m an earl, for God’s sake. We have and deserve everything, don’t you know?” When that actually got a smile from her, he murmured, “It will work out in the end, Bree. I swear.”
“It didn’t work out last time.”
“That’s because we actually planned to marry. It’s much easier to manage imaginary engagements. You can dissolve those at a moment’s notice with little difficulty.”
He was rewarded by her throaty chuckle.
But when he started to enter, she halted and said, “Hold on.” She reached up to straighten his cravat and smooth a lock of his hair. “That’s better. Now we’re ready.”
The wifely gesture made his pulse stutter. Damn her. Every time he thought he had her figured out, she did something so . . . so bloody endearing that he wanted to toss his opinions of her out the window.
Careful, man. She’s not the woman you thought you knew.
He’d simply have to keep reminding himself of that.

Do you have a favorite book or character?

Are you a second chance romance fan? What draws you to this trope?