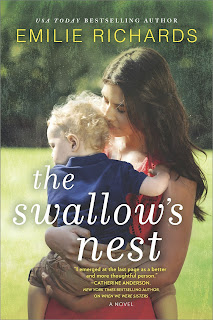 A year after Lilia Swallow’s husband, Graham Randolph, was diagnosed with lymphoma, she is exhausted by the twelve-month battle, thrilled to have him home and returning to health, but almost afraid to trust that he is in remission. Lilia is a home decorating blogger who named her successful blog The Swallow’s Nest after the house in San Jose, California, which Lilia inherited from an aunt and which she and her husband have renovated and in which they now live. She shared the difficulties of the past year with her blog readers and she is also sharing details about the celebration she and Graham are hosting. Their friends and business associates, all the people who care about Graham, have gathered at Lilia and Graham’s home to celebrate after a frightening, bleak year. Graham’s parents are notably missing, but since they are largely absent from his life, no one is surprised. When the voluptuous Marina Tate, a business acquaintance of Graham, arrives unexpectedly, Lilia thinks only that he must have invited her. Then Marina shoves a baby into Lilia’s arms and introduces him as Toby Randolph, the three-month-old son of Lilia’s husband.

Devastated by Graham’s betrayal, Lilia retreats to Kauai and her large, loving extended Hawaiian family. But she is forced to return to San Jose because the Swallow’s Nest, both the home and the blog, require her presence. She falls in love with Toby and soon feels as if she is his mother. It takes longer for her to forgive Graham, but eventually the three of them become a happy family. A few months later, another devastating blow leaves Lilia fighting two other women for her son: Marina, Toby’s birth mother who regrets abandoning her baby, and Ellen, Toby’s paternal grandmother, who sees in him a way to make up for her failures as Graham’s mother.

I expect an Emilie Richards book to give me characters who demand my emotional investment in their story, a plot that offers something different from the usual, and themes that challenge me to think deep thoughts. The Swallow’s Nest is vintage Richards in this respect. Although some characters are more sympathetic than others, except perhaps for Graham’s father (who has dollar signs in place of a heart), there are no villains in this story, just flawed human beings who make bad choices, sometimes with far reaching effects.

The concept of family runs through the novel, both in terms of what makes a family and in terms of how family shapes the person one becomes. Romance readers should be aware that this book is women’s fiction. Lilia, Marina, and Ellen each have a romance thread, but the heart of the book is who they are as women and as mothers and what is best for the child each woman loves within her capacity to do so.


I read, on average, more than thirty books a month and review 40-50 percent of those. Most books I remember in general terms—a sense of characters and an overview of plot; fewer leave me with these plus vivid fragments—favorite lines, particular scenes, an apt image or two. Rare books haunt me, pushing themselves to the forefront of my mind even as I read other, very different books. The Swallow’s Nest belongs in that last group. I highly recommend it.
Posted by pjpuppymom at 12:30 AM