Review - - A Touch of Frost 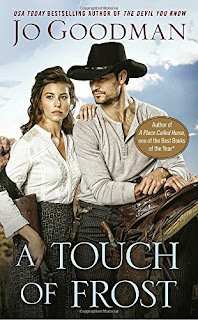 I picked A Touch of Frost because the lady I take grocery shopping (a mother figure who is not my mother) has recently gotten back into reading again--chiefly romances--and I’ve been determined not to let this opportunity for her mental good health go unassisted when I can help. She is the kind of reader that romance writers write for, I believe--well, we write for all kinds--but my friend suffers from depression and bipolar disorder and has for many years before the right medications and care began to work for her. When she was younger, she used to read romances all the time; and then for about 20 years, she refused to read them at all. So when she started reading them again--and asked me specifically if I could bring her some books--I came loaded with books. I asked her preferences. Cowboys, she said.

At the library, I saw that Jo Goodman’s books had cowboys on the covers and I put several in the bag for my friend. The next week at our usual grocery-shopping-McDonald’s excursion, I asked what she’d read and if she liked anything. Normally she’ll say, “They were good. Nothing stood out.” But this particular week, she said, “The cowboy books were really good.” “You mean the Jo Goodman books?” “Yes,” she said emphatically, “I liked those.” You have to understand that this lady’s demur “liking” of something is my equivalent of a Harry Potter Is Coming squeal. So when PJ sent out a list of ARCs allowing us reviewers to pick and I saw a Jo Goodman book, I thought, “Linda likes her books. I’ll try that one.”

And much like when I finally picked up the first Harry Potter book--after years of ‘ignoring the hype’--I fell into the book like Alice down the rabbithole, thinking, why hadn’t anyone told me about these books before? This woman is amazing!

When A Touch of Frost opens, Phoebe Apple is on a train, headed west to Frost Falls, Colorado, to visit her sister, Fiona, and new brother-in-law, Thaddeus Frost, when the train is robbed and she is kidnapped for a ransom. A stranger on the train--one who had been watching her ever since St. Louis or Chicago--rescues her, only this is no stranger. Remington Frost is Thaddeus’ son, who asked him to keep an eye on the young woman to make sure she arrived to Colorado safely. Fortunately, Phoebe is rescued without much effort; however, the rest of the book turns around the mystery of who kidnapped her and why. Thaddeus, strangely, doesn’t care and isn’t even interested in getting back the $2000 he paid to the kidnappers. Unfortunately, Phoebe’s own sister seems to be the biggest suspect behind the kidnapping, which is only reinforced by Thaddeus’ insistence to let the whole thing drop.

Secrets are revealed. And then more secrets are revealed. And then the mother of all secrets is revealed. Jo Goodman is extremely light-reined in maneuvering the reader into believing one thing and then revealing something else altogether. While reading and enjoying the story, I couldn’t help but admire Ms. Goodman’s deftness at weaving her story. If writing a story is basket weaving--and in romances, there are critics who certainly give the impression there is no trick to basket weaving--she takes simple materials, but weaves such a fine steady pattern that by the time the product is completed, it will definitely hold water. She creates a story that holds up in plot, characterization, historical accuracy (social mores) and romance. The setting is complete but not intrusive; the banter between the two main characters is natural and endearing; and the love scenes were at once realistic but so sensual and warm, you want to dog-ear the pages to show a willing participant later.

Remington is the kind of hero to root for and to revel in, a man of honor and humor and patience. Phoebe is capable, compassionate, and curious. The mystery that unfolds (because if you guess who did it, you should be a Sherlock) is well-played; and the relationships between Thaddeus and Fiona, Fiona and Phoebe, and Phoebe and Remington are real, complicated but cohesive. Communication is key in all these relationships; and Ms. Goodman demonstrates why these relationships hold together and thrive despite some rather sticky circumstances.

I can’t decide which I enjoy better: her dialogue or her ability to create realistic characters and scenes. It all just works, and she makes it look easy.

Have you read Jo Goodman's books?

What's the last book you fell into?