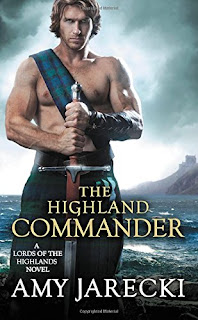 The Highland Commander is the second in the Lords of the Highlands series, set in 1709, just prior to the first Jacobite rebellion. While Queen Anne rules Great Britain, there are those in Scotland who want the true king, Prince James Stuart (the Old Pretender) to assume the throne.

Of course, our hero has other things on his mind than getting the rightful king back on the throne. As Aiden Murray, second son of the Duke of Atholl, makes his way up the Navy ladder, he is determined to be his own man--and in the most immediate future to “become a man”. He’s been a little busy with books and working his way through the ranks to pursue the fairer sex. Ever. But he’s determined to lose his virginity as soon as possible--and the slightly scandalous Hogmanay ball with all those beautiful women in masquerade masks should help relieve him of his inexperience.

He attends the Earl Marischal of Scotland’s masquerade party and meets the beautiful and innocent, Lady Magdalen Keith. While he is enchanted by the fair maiden, his goal is decidedly different than wooing a maiden who would be more suited for marriage than the bedroom, even if she has the most beautiful eyes he’s ever seen and kisses like a dream. A Navy lieutenant on 24 hour shore leave. A masquerade ball on Hogmanay. The illegitimate daughter of an earl with beautiful blue eyes and a kiss to die for. What’s not to love in this set up?

Three months later, when he is given a two-week shoreleave, Aiden travels to London to live in his father’s rooms at Whitehall, and from there, find a suitable widow for his education. Who should he find on his way to Whitehall, in distress and in need of help? Yes, the most innocent fair Lady Magdalen! What does he do when he realizes she has nowhere to sleep because her father’s rooms have been seized due to his treasonous actions? Why he brings her to his rooms in Whitehall of course. That isn’t going to put a cramp in his The Hangover: Jacobite style at all. Oh, wait. It totally does.

When Aiden returns to the ship and has a talk with the captain, his mentor and near father figure, about Magdalen and the dilemma and his virginity, the good captain takes some pity on Aiden and hands him a pamphlet full of the most useful drawings any young man would want. By now, he’s so enthralled with Lady Magdalen, he persuades her to try out some of the less pregnancy-likely options on the page. Lady Magdalen is already half in love with Aiden and has been since the ball. While Aiden assists Magdalen during the day in her quest to have her father released (and not executed), at night they pursue passion in each other’s arms.

Later, after Aiden returns back to his ship, Magdalen is invited to stay at Whitehall with Queen Anne and be her harpist. Her (newly released) father uses this opportunity to have Magdalen spy for the cause. Magdalen would love nothing more than return to her home in Stonehaven, to do her good work at the women’s hospital; however, her duty is to her father and his requests to keep him informed of anything the queen and her consorts say. When Magdalen is accused of trying to kill the queen, she is rescued by Aiden who flees with her to Edinburgh. They escape a number of times, each time fraught with peril, until they are finally safe on Aiden’s family ancestral land in a remote cabin.

Now I’m not a fan of virgin heroes, but Lord Aiden is definitely the exception to this rule for me. He’s like a deliciously Scottish Commodore Norrington (i.e. Pirates of the Caribbean) in demeanor and fighting skills. The escape scene on the ship--oh, that’s worth the read alone--I was laughing and gasping in distress, afraid they wouldn’t succeed, but in addition to being brilliant with a sword, he’s an excellent swimmer too. I loved how vividly Jarecki was able to paint the scene and the other escape scenes that followed. While the escape sequences grew a little long (not unlike that action sequence in the third Pirates movie, you know the one I’m talking about), they were well executed and intense.

This book hit all the right notes for me: swoon-worthy hero (oh, so, swoon-worthy); a sympathetic and capable heroine; intrigue and action scenes (fast paced); witty dialogue and banter; and sensual love scenes that grow the relationship. An excellent read.
Posted by pjpuppymom at 12:30 AM