Review - - On the Plus Side 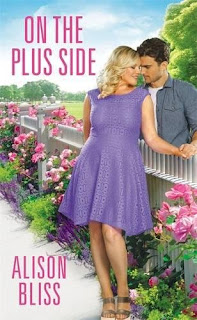 ON THE PLUS SIDE has several things I enjoy in a contemporary romance: a feisty heroine, an alpha hero, funny situations and witty banter. On the plus side (see what I did there?), the heroine, Valerie, is a plus-sized heroine, which aren’t featured too often in romances; the relationship conflict revolves around that Logan (the hero) is the best friend of her brother--and her brother will kill them both if they date (so a sort of “forbidden” friends to lovers trope); and fun and likeable secondary characters.

Valerie Carmichael has been in love with her brother’s best friend, Logan, since she was a teenager. Logan has returned to their hometown and he is once more in her orbit, and this time she is determined to make him notice her. Logan has never had a problem noticing Valerie, though he sincerely wishes he wouldn’t. He would never betray his best friend, and Valerie deserves so much better than Logan.

Logan needs to hastily raise $10,000 to save his mama’s house from foreclosure, and the brisk business at his new bar is likely to raise the money just in time, but Logan finds himself in a bind when his head bartender quits. Valerie volunteers to replace him, but Logan doesn’t want Valerie anywhere around him. Valerie refuses to let the opportunity go, and while Logan is trying to fix one problem, Valerie gets behind the bar to fix his bartender problem. When he returns, and Valerie is whipping up cocktails like a Tom Cruise movie, he realizes he doesn’t have a choice. At least for now.

Meanwhile Valerie talks with her friend Leah about the fact Logan won’t look twice at her--and as the topic progresses (and perhaps tangents), Leah encourages her to create a list of all the sex stuff Valerie would never do. Valerie makes a list, then throws it away. But guess who finds the list? Yes, yes, Logan does. Logan’s #1 rule about Valerie takes a nosedive, as he believes this list is her Sex Wish List and he goes about fulfilling it.

Valerie loves working at the bar--even though she told a “little lie” to make Logan give her the job--but that won’t be a problem will it? Of course it is. And things can’t get worse for Logan, can they? Of course they can.

I’m not sure what “genre” this truly falls under, but it reads a bit like a erotica-lite. Logan thinks and speaks in very rough language, so if you happen to be someone who reaches for their smelling salts when someone expresses a desire to be “balls deep” with his “dick” in you, you might skip this one. If you prefer sex scenes that take place in bedrooms, or basically nowhere public, you may want to skip this one. If you prefer heroes (and characters in general) who don’t throw fists and ask questions later, assume the worse of the heroine when she’s in a compromising position (rather than making sure she’s okay), or blame her entirely why his life has gone to hell? This book may not be for you. I will grant you the sex was hot in this book, but it got to a point where I started skipping because I was tired of reading about them doing it. That doesn’t happen. Also, in the first sex scene when he “forgets” to put on the condom and then apologizes later--and she says, “It’s all fine. I’m on the pill.” Yeah, no, that is not a pass. These just happen to be a few of my personal reader rules.

Granted, I can say both characters felt believable in their behavior and actions on the whole, but I just didn’t care about their happy ending because I didn’t care about them. I wanted to get him into some anger management classes; and her in some healthy relationship classes. Mostly, I thought, these characters feel very young (far younger than they are portrayed) in their actions and dialogue and it made me feel old reading it. Very, very old. And puritan at times.

Well-developed characters, fast-paced plot, sexual tension and hot scenes, witty and funny scenes--it checks the marks, but for me, wasn’t my cup of tea.

Email ThisBlogThis!Share to TwitterShare to FacebookShare to Pinterest
Labels: 3 Star Review, Alison Bliss, Contemporary Romance, Hellie, On the Plus Side