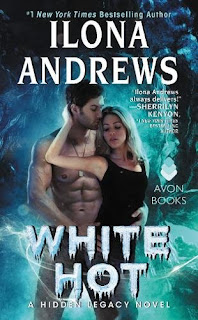 White Hot is the second book in Andrews’ Hidden Legacy paranormal romance series.  It’s set in the same world as the prior volume, Burn for Me, and continues the romance of the two leads from that book, Nevada Baylor and Connor Rogan (a/k/a Mad Rogan).

With help from her family, Nevada runs the private investigations agency that supports them all.  Her rare magical talent, being able to tell when someone’s lying, is often useful for her work, but if her ability were widely known, government agencies and others needing a reliable interrogator would take over her life.

Those are the problems she anticipates.  She doesn’t know there’s someone else out there who would crush her family if the truth about her abilities, which are steadily growing stronger, were known.

Rogan is a billionaire and a prime, which is the highest ranking for a magic user.  He’s also the head of House Rogan, a magically gifted line.  In the Hidden Legacy world, families with magical gifts establish houses to continue their lines.  There’s a non-magical government and civic structure, but these houses hold the true power in Houston, Texas, where the series is set.

Unfortunately for Nevada, she can’t resist using her gift when she sees that it’s truly needed.  She also can’t resist a potential client on a desperate quest for justice for his dead wife, even though that quest pits him and Nevada against some of the city’s most powerful magical houses.

At the end of the first book, Burn for Me, Nevada and Rogan parted ways after he made an offer that insulted her.  Nevada’s family is sure they aren’t done, and various members make a point of saying so. She doesn’t know he’s also investigating the same case she has just taken on.  Employees of his died, and he means to avenge them.  He has information and skills she needs, so she reluctantly agrees to work with him.

The time they spend together shows her that his emotions aren’t as simple as she believed and teaches him that the blunt approach isn’t always best.  At the end of the book, when both their lives are on the line, each would rather die than sacrifice the other.  They have become a team.

The romance picks up early in the book, and Nevada and Rogan’s reunion is explosive.  There is considerable and consistent emotional tension, which is leavened with periodic sexual tension, and the progression of the romance works very well.  Nevada’s family, who were intriguing in the first book, are fleshed out even more in this one, with one person developing a potentially disturbing gift.

Overall, the story moves at a great pace.  The stakes rise through the book so that the ending is riveting.  It’s also satisfying. The only blip is that one subplot was built up to be more than its resolution implied.  I’m hoping that’s because it will be developed further in the next book. An advantage of continuing characters and situations is the ability to start something in one book and move it to the fore in a later one.

PJ, here. I read this book last week and loved it. Like Nancy, I give it an enthusiastic recommendation. I have an extra copy of White Hot for one randomly chosen person who leaves a comment before 11:00 PM, June 20. (U.S./Canada only)