On Second Thought - - The Callahan Brothers

Caution: Some spoilers may be included.

A decade or so ago, when Emily March was still publishing under the name Geralyn Dawson, she introduced her readers to the Texas town of Brazos Bend and the Callahan family. Branch Callahan, only grandson of the founder of Brazos Bend, and his wife, the former Margaret Mary McBride, were the proud parents of four rambunctious sons known as the “Holy Terrors”: Matthew, twins Mark and Luke, and John. Margaret Mary’s death when the boys were in their teens left Branch in such a stupor of grief that he neglected his parental responsibilities and allowed his sons to run wild. When a drunken prank led to a fire that destroyed the town’s largest employer, Branch disowned his sons. As men, the Callahan Brothers are involved in work to make the world safer: Luke as a DEA agent, Matt as a CIA operative, Mark as a military intelligence investigator, and John through his work with the State Department. When John is kidnapped and Branch’s efforts to free him fail, the remaining brothers blame Branch for John’s death and cut their father out of their lives. This is the situation when Give Him the Slip, the first of the Callahan Brothers books, opens. In 2011, Geralyn Dawson began writing as Emily March. Angel’s Rest (February 15, 2011, Ballantine) was the first of her popular Eternity Springs series. A Stardance Summer (June 27, 2017, St. Martin’s) is the thirteenth book in that series. Both are linked to the Callahan Brothers books.

In 2014, Emily March reissued the Callahan Brothers novels and retitled the first three books, using the names of the surviving brothers.  As a Geralyn Dawson fan, I read these books when they were first published. I reread them in 2010 when A Callahan Carol was first released as a free Christmas novella. I reread them again when the digital version of the reissued books became available and read them a fourth time just before I read A Stardance Summer. Suffice it to say, I love the Callahans! 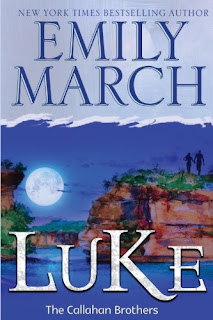 Luke begins seventeen years after Branch disowned his sons. Maddie Kincaid, the daughter of rock stars and a paparazzi target herself as “Baby Dagger,” believes she has found the normal life she has sought in Brazos Bend, but even in small-town Texas, trouble finds her. A favor for one of senior citizen clients leaves her with $4,000,000 worth of an illegal substance stashed in her car. Another client (Branch Callahan) suggests she can find the help she needs from “Terri Winston,” a DEA agent in Louisiana. Finding no one at home on the houseboat where the agent is supposed to be, Maddie makes herself and her pet goldfish Oscar at home; then, exhausted from travel and stress, she falls asleep.

The death of his partner, Terry Winston, prompts Luke “Sin” Callahan to resign from the DEA. At loose ends after Winston’s funeral, Luke boards his houseboat with Knucklehead, the stray mutt who has adopted him, and sets out to decompress for a couple of days before joining his brothers for an extended fishing trip. A comedy of errors ensues when Maddie awakens to find Oscar at the point of being eaten by a dog. Her scream brings Luke on the scene. He thinks his stowaway is a whore sent by his father. She just wants to speak to the female DEA agent to whom Branch directed her. She is dismayed to find the agent is male and that his funeral has just taken place. Clearing up the confusion about identities does little to mitigate the distrust between Maddie and Luke. Their distrust continues even as the attraction between them grows. But when Maddie is in danger, Luke’s compulsion to protect her is strong enough to take him back to Brazos Bend. What follows is a wild adventure with danger and thrills and a passionate, bumpy road to an HEA. 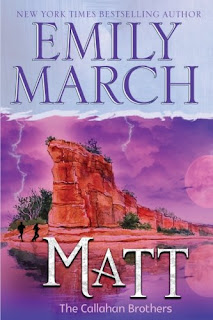 The pattern holds in the second book, Matt, in which the eldest Callahan brother, a CIA agent, agrees to rescue the daughter of a general. Matt arrives on a South American island to rescue scientist Dr. Helen Bradshaw. Instead he rescues her twin sister, Torie Bradshaw, a paparazzo photographer who has just witnessed the murder of her sister’s fiancé and who is literally running for her life. Part I of their shared adventure ends when Torie inadvertently shoots Matt in the leg, a career-ending injury. The second adventure begins eighteen months later when Torie seeks Matt’s help when she is being threatened by a stalker. Matt is reluctant at first since he harbors some resentment for his injury and Torie with her purse-size dog Gigi and her pink Glock is a distraction he does not need. But, of course, his protective instinct kicks in, and the explosive chemistry between him and Torie takes care of the rest. “Demon” Callahan has met his match. This is my favorite of the original trilogy because of all the James Bond humor, and the ending is over-the-top delightful. 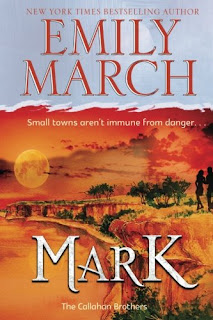 Mark is the darkest of the three books. The Callahan brothers are in Hawaii on a rescue mission for a Brazos Bend native when Mark, now an ex-military intelligence officer, blunders into an operation in which an old enemy and Annabelle Monroe, a former colleague, are involved. Annabelle is also Mark’s wife, although their marriage is a secret and they have been estranged for two years. They work together to get everyone away safely, but his brothers learn who Annabelle is. Mark and Annabelle enjoyed several years of an unconventional marriage consisting of separations and sexy reunions at sites around the globe, but when Annabelle wanted a child, Mark walked out. His family forces him to recognize that if he can’t give Annabelle what she needs, he should divorce her. He sets the divorce in motion, expecting that he has seen the last of Annabelle. However, several months later they meet at the funeral of a friend who, like them, had been a member of a small, cross-agency, covert group of freelance troubleshooters informally known as “the Fixers.” Annabelle brings the news that four of the Fixers are now dead in suspicious circumstances and four others cannot be contacted. It seems clear that the Fixers are being targeted. As Annabelle and Mark work together to find the killer, their feelings for each other reignite. But Mark cannot begin a new life with Annabelle until he comes to terms with his past—the death of his young wife and child for which he holds his father responsible. 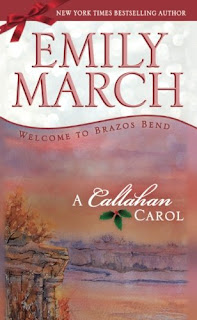 At Mark and Annabelle’s second wedding, the Callahans learned that John did not die in the kidnapping incident. They spent years searching for their youngest brother, to no avail. In A Callahan Carol, more than seven years have passed since that wedding, and the Callahans have been unable to discover any news of John. Hope is fading in the brothers’ hearts, and Branch Callahan has given way to despair, cancelling the family’s traditional Christmas display and even forbidding a Christmas tree because the season’s promise of love, joy, and peace ring hollow to him. When the family puts up the Christmas Wonderland display and decorates a tree, Branch, in the midst of an angry outburst, has a heart attack. Two weeks later, he is in a coma, and the family has brought him home to die in his own bed. In an unconscious state between life and death, Branch is visited by a gray-haired woman on a Honda Gold Wing, wearing white leather, a golden helmet, and angel-wing earrings. In a Scrooge-like sequence, she and Branch visit scenes from his past, and she gives Branch the choice to return to life with his family or to go on to a life beyond. He chooses life and awakens to a Christmas miracle. John Gabriel Callahan has come home for Christmas.

Eternity Springs readers will recognize Celeste Blessing in the figure that visits Branch, and A Callahan Carol ends with John Gabriel Callahan’s promise to tell his family about “a little piece of heaven called Eternity Springs.” This sweet, unabashedly sentimental story is one of my favorite Christmas reads. It also serves as a bridge between the Geralyn Dawson Callahan books and the Emily March Eternity Springs books. 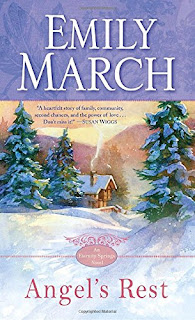 Angel’s Rest, the first Eternity Springs novel, is Gabe Callahan’s story. Veterinarian Nic Sullivan draws the isolated Gabe back into the stream of life and teaches him to open his heart again. A Stardance Summer introduces a new generation of Callahans. The hero is Brick Callahan, the son Mark discovers in the third Callahan Brothers book, grown up and engaged in making a success of Stardance Ranch, his Colorado glamping resort. Callahan cameos abound. PJ and I will be discussing Stardance Summer in our next Just Between Us column on June 30. We hope you will join us then for more of the Callahans.

Meanwhile, I hope you will read the Callahan Brothers books and enjoy them as much as I did. Readers who know March only through her Eternity Springs books may be surprised to find the Callahan novels considerably spicier than you expect. If you like family dynamics, humor, suspense, and sexy times in your contemporary romance, I recommend you give the Callahan Brothers a try.