Review - - A Princess in Theory 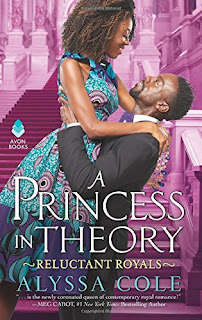 So if you know me at all, you know I'm a little Royal-Mad, as in when Will and Kate got married, I stayed home and watched, even though my family hasn't been a member of the crown since 1776. I have a special place for the commoner who marries the prince. Some fan-readers are die hard secret baby people, but I'm all about the royalty. Imagine my complete fan-girling glee then when I found a book (who knew those Facebook sponsored ads were actually working?) that had all the things I loved: a strong, smart, sarcastic heroine; a hot and articulate prince; and a hilarious case of mistaken identity.

The first page is an email sent to our heroine, which reads like the most cliched of chain letter scam emails from a Nigerian prince who needs a million dollars, and I was hooked. And then there's our original world with Naledi Smith, who is a grad student working to be a scientist to cure infectious diseases, and her interaction with a coworker is a textbook example of the #MeToo movement and
Lean In. It would be hilarious if it weren't just so, so real. I bought the book immediately so I could keep reading. I was so glad I did.

When Naledi finally does respond to that string of scammer Nigerian-esque prince emails with a succinct "Fuck. Off.," her prince in waiting laughs and insists on meeting her in person. Prince Thabiso of Thesolo confronts Naledi, his childhood betrothed who has been missing for twenty years, and is mistaken for a commoner--the new hired staff at the restaurant where Naledi works when she isn't studying. Instead of correcting her, he is intrigued about the possibility of getting to know his absentee bride without the trappings his royal prestige affords him. How will he know for sure if she likes him if she's only fawning over him because he's rich and powerful?

Not to worry. Naledi doesn't like him at all. Oh, she's inexplicable attracted him, which she doesn't have time to think about and is causing her a bit of worry because this. never. happens. It much be his accent. (I hear you, Naledi.) But Jamal--as she knows Prince Thabiso-- is just a fuckboy who is here to screw with her and frankly she doesn't have that kind of time. But Jamal isn't easy to get rid of, not even when she fired him for being the worst server ever. No, no, somehow he manages to be in her life and is worming his way into her heart like some sort of parasite. In fact, she might start to admit she does like him, even as he keeps hemming and hawing that he has something to tell her. Something important.

When Naledi does finally learn Jamal is actually Prince Thabiso; and that she is actually Thabiso's fianceé and a long lost child of Thesolo, not just an orphaned, unwanted, foster kid of New York, she is livid. She already had trust issues; Thabiso did not help his case. When Naledi is convinced to travel back to Thesolo in order to do research on a new mysterious disease that is harming many of the people, she will be able to do her job without letting her heart get involved with the one man who can hurt her above anyone else? And will Thabiso be able to atone for his deception and convince Naledi she is the only woman for him?

You guys, this book has become my measuring stick for contemporary romances, and here's some of the reasons why:

1) Consent is sexy. He asks for consent. He doesn't assume. Mind  you, I usually enjoy romances where the hero is kissing without asking, but Cole makes me question why I think that's sexy. This was romantic and sexy without feeling weak.

2) Smart is sexy. Granted, not every heroine can be a scientist, but there is something to be said for having your characters passionate for something that they know a lot about. So much so that their identity is wrapped up in it and their speech, mannerisms, et al, conveys it. Naledi thinks science. When she metaphors, it's in science metaphors. When she jokes, it's science jokes. Her essence speaks in science and it's powerful to read a character so dimensionally drawn on the page. The same is true for Thabiso. He's grown up a prince of Africa, so many of this thoughts, words, references are about the place he grew up. The contrast of the experiences between these characters is so well defined, it should be a textbook example for writing.

3) Safe sex is never tampered with. Cole should get an award for this alone. Even though Naledi makes mention of having backup birth control, both she and Thabiso make sure to use condoms. Because it is the RESPONSIBLE thing to do in this day and age. It's not a big deal in the book; and there is even a brief sentence of disposing of the condom after. Again, not a big deal...and yet in many contemporaries I read, condoms are skipped with a side line that she is on the pill or something. That is not the only thing condoms are for, just saying.

4) Equality and respect are sexy. Even though he was a future ruler of an entire country, he never treated Naledi as if she were second to him. She was a partner in every way; her intelligence and fierceness were the things he loved most about her. Granted many romance novels have heroes that show this, but at no point in this book did he throw her under the bus to save himself or make her look bad. He always defended her and upheld her attributes.

5) Learning from each other is sexy. The flaws in these characters were the kind that are "too much of a good thing"--where at the surface you don't see them as flaws until you see what it's preventing the characters from doing or being. Naledi won't let anyone close, won't let anyone help her. She's self-sufficient, self-reliant, and it's only when working with Thabiso as he says, "You don't delegate enough" that she begins to question if part of the reason people take advantage of her is because they assume she'll do it all. Again, I just wanted to reread just to figure out how to do this in my writing.

I kept reading parts of the book to my coworker: "Listen omg, this is hilarious!"--this along would make me recommend the book. So if you're looking for a good book to read, it definitely meets that mark. If you write or want to write, I recommend reading this book to pull apart to see what good writing and character development is. I cannot wait until the next book comes out, about Naledi's friend Portia, although I hope in the future, we get to hear of a happily ever after for Prince Thabiso's assistant, Likotsi.

I hope you enjoy the book as much as I did.