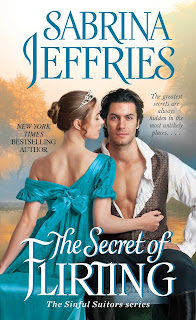 The Secret of Flirting, the fifth and final book in Sabrina Jeffries' The Sinful Suitors series will be released March 27. This has been one of my favorite series by Jeffries and while I'm sad for it to come to an end, I'm also excited for this next release. I'm intrigued by spymaster Baron Fulkham, especially after reading book 4, The Pleasures of Passion, and can't wait to finally read Fulkham's story in this new historical romance by one of my favorite authors. And let's talk about that cover for a minute. Don't you want to know what she's whispering in his ear? Those colors are simply gorgeous. And speaking of gorgeous, how about Fulkham? Am I the only one drooling on my keyboard?

Update: I started reading an ARC of The Secret of Flirting last night. I finished at 2:00 this morning. What a wonderful send-off for this series. I loved it!


The Secret of Flirting
Excerpt

When they reached the garden, Monique’s heart sank to see it so deserted. Apparently she hadn’t been the only one to think dinner might soon be served. Even the band they’d heard playing out here earlier had packed up and moved inside, closer to the banqueting room.
You can handle this, she told herself. You’re an acclaimed actress, for God’s sake. This is what you do—play roles. Why, you’ve even played a princess before. So get to it, and show this pompous gentleman what you’re made of.
With that in mind, she went on the offensive. “Please forgive me if this is rude, Lord Fulkham, but I’m confused by what my uncle said concerning your part in these negotiations. I was unaware that undersecretaries were of such profound importance in English political matters. I thought they were little better than clerks.”
If she’d thought to insult him, his laugh showed that she’d failed. “Some of them are. It just so happens that England has two kinds. I’m the political kind. Especially these days, with the foreign secretary laid up in bed.” He cast her a searching glance. “You have a better knowledge of English affairs than I would have expected.”
She had her half-English father to thank for that. He’d always kept up with politics in his mother’s country. “And you, monsieur, have a better facility for ‘diplomacy’ than I would have expected. I think my uncle is right. You do have a silver tongue.”
“I hope not. It would make it awfully hard to eat,” he quipped.
A laugh sputtered out of her. Curse him. She didn’t remember him having a humorous side. “You are very droll, monsieur.”
“And you are very . . . different,” he said.
She tensed. “From what?”
“From what I expected. I’d heard that the Princess of Chanay was a rather haughty young lady.”
She had no idea if Anne was haughty. Though it would stand to reason. Weren’t all princesses haughty?
Not the way Monique played them. And it didn’t matter how Anne really was. According to the count, no one outside Chanay had ever met the princess, so Lord Fulkham couldn’t be sure what she was like. He was merely trying to catch the woman he had met in an error.
Which meant she must be as different from Monique Servais as possible, to throw him off guard, make him doubt his eyes. Monique Servais had given him the sharper side of her tongue, so Princess Anne must be engaging, flirtatious.
“A man like you should know better than to listen to rumor,” she told him.
“Actually, rumor is my life’s blood. There’s generally a bit of truth in every piece of gossip. It’s my job to find out which bits are true and which bits are trumped-up lies.” He led her down a path. “For example, I heard that you were partial to theatrical entertainments. Is that the case?”
Curse the fellow, he’d heard no such thing. He was just baiting her again.
She fought the urge to stiffen, keeping her grip of his arm deliberately loose. “I enjoy the occasional play, yes. Doesn’t everyone?”
“It depends. I like plays, but only tragedies.” He shot her a veiled look. “Comedies set my teeth on edge.”
She remembered only too well his ridiculous opinion of comedies. “I prefer operas,” she said lightly. “Doesn’t matter to me what the story is about as long as there’s singing. Do you enjoy the opera, monsieur?”
That seemed to catch him off guard, for he frowned. “Not at all, I’m afraid. In real life people don’t speak to each other in arias.”
“In real life people do not wear elaborate costumes to go to the market either, but one can still enjoy seeing such attire in that setting on the stage.”
“Yes, those powdered wigs are quite entertaining,” he drawled. “Especially when the actors and actresses are running in and out of the boudoir.”
She could feel his eyes on her. Clearly he was referencing Le Mariage de Figaro directly. Silly man. As if that would make her lose her control and spill her secrets. “Oh, I do like that kind of opera myself. Otello is so dramatic. And that scene in Desdemona’s boudoir makes me weep every time.”
He halted to eye her closely. “You’ve seen Rossini’s Otello?”
“Of course. In Paris. It was quite moving.”
A triumphant look crossed his face. “I thought you rarely left Chanay.”
Too late she remembered what the count had told her about Anne’s secluded life. She scrambled to cover her error. “That’s true—I rarely do. But Maman took me to Paris to see Otello once when I was a girl. It’s her favorite opera.”
“You said that it ‘makes me weep every time.’ That implies you’ve seen it more than once.”
Her heart thundered in her chest. “I meant ‘every time I think of the scene.’ I misspoke. English is not my native tongue, you know.” She tipped up her chin. “And why do you dissect my words so, monsieur? Is it necessary for the prospective Queen of Belgium to speak your language perfectly?”
“That’s not why I ‘dissect’ your words, as you are well aware.”
Merde, obviously he’d figured her out. She would have to tread carefully, or else he would swallow her up, and with her, all her hopes for her and Grandmamma’s future. “I have no idea what you are talking about.”
“Come now, mademoiselle.” He leaned close enough to show the hardening planes of his face. “It’s time that you relinquish this pretense. Because you and I both know that you are Monique Servais and not the Princess of Chanay at all.”

Have you read any of the books in Sabrina Jeffries' The Sinful Suitors series?

One randomly chosen person posting a comment before Midnight (Pacific Time) today will receive a print ARC (advance reader copy) of The Secret of Flirting. (U.S. addresses only)