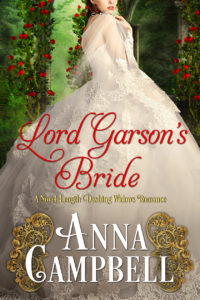 Lord Garson's Bride by Anna Campbell is a solid 4 stars for me! It is the last book in her Dashing Widows series.

I've looked forward to Garson's story ever since he was summarily rejected by his fiancé, Morwenna Nash, following the unbidden return of her dead husband. She got her happily ever after but I couldn't help but wonder what happened to the poor guy who had to witness their reunion at the announcement of his engagement.

Turns out he was still holding the torch for her even after three years but he's a pragmatic man and as a baron is in need of an heir. Nothing more, nothing less. So he travels north to ask for the hand of Lady Jane Norris. Their fathers were best friends and they knew each other as children. He'd seen her again at her father's funeral.

Hugh Rutherford, Lord Garson, sees that Lady Jane Norris is by all accounts as plain and pragmatic as her name. She has been in charge of her father's estate ever since he fell ill just before her coming out. To that end, Jane has spent the last ten years of her life caring for her ailing father and his estate. Now that he is gone, she is at loose ends. The estate will go to a cousin, leaving Jane to either go to her sister's in London or, with little funds, to settle in a cottage with a former governess. Neither prospect truly appeals to Jane for in London she'd be nursemaid to her waspy sister's brood and a cottage by the sea will simply serve to remind her that life once again is passing her by.

It's quite a shock when Hugh proposes marriage to her. She is no fool and knows this cannot be a proposal given from any love he may have for her. Even as tucked away in the country as she's
been, she knows of his rejection and can see how that hurt shadows his face. But Hugh is clear that marriage to him would be mutually beneficial to both of them. Jane would get security without having to have to manage everything all by herself. He already knows she can run a household and offers her a chance to see London, meet new people, and have anything she desires.

He offers her mutual respect, companionship, and children. Anything but his love. He thinks one can only have one true love in one's lifetime. Jane, who has always had to make due with whatever life throws at her is practical. She thinks they will rub well enough together. To have a home of her own and children was something she never thought she'd ever have. Having someone to love and be loved in return was not something that she thought was ever going to be a part of her life and so she says yes.

From those beginnings comes a story that made me laugh, sigh, and cry. Jane blossoms as she
comes into her own away from the isolation she felt and all her duties. She is a beauty and is
welcomed by the ton and Hugh's friends. She meets all the Dashing Widows and their spouses.
I have to say, it was great fun to see them all again!

As they come to know one another, a fondness grows and from there Jane learns that she wants
everything a marriage has to offer. She wants love and it's still the one thing that Hugh does not
feel he has to give her. In some books, this could prove to be a stumbling block of monumental
proportions. As a reader, I wanted to see how it all worked out because Anna Campbell had made
both of them very likeable. Hugh never strayed at all from Jane in thought or action. But their
arrangement to gain an heir, void of the closeness they gained, makes Hugh suffer just enough to
learn for himself that his love was not a three year memory after all but his own Lady Jane who is
everything he could ever need in his life, a beauty both inside and out.