Review - - Twins for the Rancher 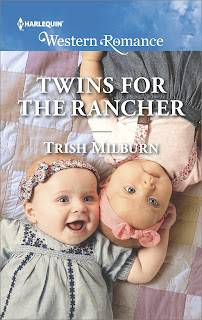 TV chef and baker, Lauren Shayne has come to Blue Falls, Texas to start a new business, not a new relationship. Lauren has little trust left for the male half of the population after her louse of an ex-fiancé tried to steal half of her business, ruin her reputation, and publicly disavowed paternity of their twin daughters. The only male she needs in her life is her grandfather, Papa Ed, the man behind the idea to open a restaurant in Blue Falls where Lauren will feature Papa Ed's award-winning barbeque recipes, and who has come along to help take care of the babies while Lauren whips the building she's purchased into restaurant shape. But then along comes Adam Hartley. He stops by to pitch his family ranch's branded beef for that delicious barbeque and stays to help. Multiple times. The more Lauren is around him the more she likes him. Everyone says he's a good man. Her grandfather likes him. Her babies adore him. His family seems welcoming and genuine. But Lauren still has those trust issues.

Adam Hartley has a good life and a good family. One of five adopted children, he's known nothing but love and support from the Hartleys. Now he's searching for the right way to give back to the family ranch - as his siblings are doing - to ensure it's stability and prosperity for future generations. The Rocking Horse Ranch Collection - including branded beef - is his idea. If he can secure Lauren's business for his family ranch it will go a long way toward the establishment of that dream. He never anticipated that he would want to "secure" the woman herself. He's smitten from the get-go but, once he learns her background, he knows he has to take it slow if he's going to earn her trust. Will she be able to overcome her fears enough to trust him with her business? With her heart? If she's only willing to choose one, which will it be? Adam knows what he would choose but what about Lauren?

Trish Milburn returns to Blue Falls, Texas for another heartwarming story in this long-running series. I've read, and enjoyed, each one of these books and always look forward to another visit when a new book is released. Milburn really captures the essence of this part of the Texas Hill Country and the essence of the community represented in her fictional town of Blue Falls. While characters from previous books are featured in this one, it doesn't lessen the appeal for readers who haven't read those stories. If you're a fan of the series, it will feel like a visit with old friends but if you're new to Blue Falls, Milburn writes in such a way that you'll feel like you're meeting these characters for the first time, not an outsider looking in on a reunion of people you don't know.

The sizzle factor is low (but not non-existent) in this one and toward the end of the book. The sexual tension, however, builds throughout, making it realistic and heightening the anticipation. Adam and Lauren are both likable characters, deserving of a happy ending. I enjoyed their banter, their close relationships with their respective families, and the way Adam immediately embraces Lauren and the twins as a unit. His scenes with the twins melted me into a puddle or, as Lauren puts it, "her ovaries struck up a lively tune and started tap dancing."

The secondary characters in this book aren't just window dressing. They help to move the plot along while not distracting from the main couple. There is, however, a surprise secondary storyline that should delight fans of the series. I really hope we'll find out more about that down the line along with a story for Adam's sister. I'm also intrigued with Lauren's sister, Violet. Maybe we'll see more of her as well?

If you're looking for a fun, heartwarming romance from the heart of Texas that makes you laugh, sigh, and maybe causes your ovaries to do a little two-step, do give this one a try.

Saturday Special: One person who leaves a comment on this post before 11:00 PM (Eastern), March 12, will receive a print copy of Twins for the Rancher (U.S. only)

Do you enjoy cooking or baking? What's your signature dish?

If you opened a restaurant, what kind would it be?

Who is the last fictional hero (books/TV/movies) who made your ovaries strike up a lively tune?