For Owen Cross the only thing that matters more than family is farming. As the oldest Cross brother, the land is his legacy, and he'll do whatever it takes to make Cross Creek a success--including hiring local widow Cate McAllister to manage the bookkeeping tasks that are growing in his office like weeds. Cate's as pragmatic as she is pretty, and rattles his hard-fought composure at every turn.

Cate had known a lot of things about her husband before he died three years ago in a car accident, but how much debt he’d gotten them into wasn’t one of them. She needs her job at Cross Creek, even if her boss is both gruff and gorgeous. But Owen’s a family man, through and through, and the last thing Cate is interested in is anything—or anyone—with strings attached.

As Owen and Cate join forces to right the farm, they discover there’s more to the other than the surfaces shows, and that passion can be found in unexpected places. Can Cate heal from the loss of one family to gain the love of her life? Or will the past prove too much for the promise of the future? 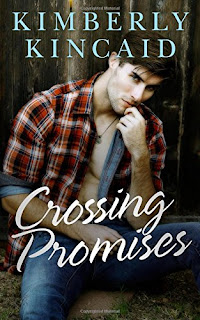 I would have laughed if someone had told me, after reading the first two books in this series, that stubborn, grouchy, all-work-and-no-play, Owen Cross would end up being my favorite Cross brother but that's exactly what's happened. There's so much more to this man than what we've glimpsed in the first two books and Cate McAllister is just the woman to bring it out. I loved these two together!

Kincaid once again gifts readers with realistic, complex characters who bring both humor and heart...along with a fair amount of sizzle. Cate and Owen have both been impacted by losses in their lives. For Owen, the death of his mother strengthened his resolve to make family and the family farm his legacy. Work is all he knows. Cate's loss has left her determined to avoid the possibility of another marriage. Yet, the desire that flares between them won't be ignored.

Kincaid guides Owen and Cate with a deft hand, keeping their relationship organic and moving it forward at a realistic pace. The banter and sexual tension between them is terrific and the unexpected emotion - especially on Owen's part - drew me in and kept me involved. I appreciated the gradual exposure of their personal histories, fears, dreams, and ambitions as their relationship deepened. Owen won my heart with his encouragement and support of Cate's dreams, something she had never before experienced, not to mention his skills in the kitchen. One of the sexiest things a man can do is cook for me and that's exactly what Owen does for Cate. I also love that Cate stress bakes as that's something I've done for years. It's so much fun to see ourselves reflected in the characters we're reading about. Kincaid keeps readers guessing as to the direction Owen and Cate's relationship will go until the very end then throws in a twist that I didn't see coming and about which I have mixed feelings. She entertains but also makes me think. I'm still thinking about this couple two weeks after finishing the book.

While each book in this series can be read as a standalone, I'm glad I started at the beginning as the family's story evolves across the books and I feel like I know them better for having read the books in order. One of the things that I especially enjoy about the series is the Cross family dynamic that lays everything out for the reader to experience, both good and bad. There's a twist at the end of book two that introduced a new character who has a lot more page time in Crossing Promises, making me even more interested in the next book in the series. I can't wait to see how the Cross brothers deal with what's coming!


Do you enjoy a story twist you aren't expecting?

Have you read any of the books in Kimberly Kincaid's Cross Creek series?

The first two books in the Cross Creek series, Crossing Hearts and Crossing the Line, are currently on sale in ebook format for $1.99 each.