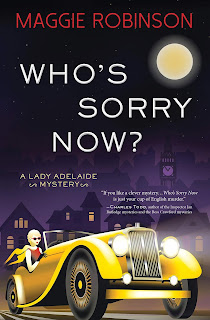 London, England 1925
A Russian prince. A wealthy heir. An impoverished earl's daughter. Which one will make an untimely exit from the London social scene?
Scotland Yard Detective Inspector Devenand Hunter finds himself in the middle of a series of upper-class deaths in London. Bright Young People are being extinguished in their favorite night spots, from a sleazy private jazz club to the Savoy ballroom. Dev knows just the person to help him navigate the treacherous society waters: Lady Adelaide Compton, a marquess' daughter and widow of a Great War hero. Unfortunately, he has put her in jeopardy once before, nearly leading him to turn in his warrant card.
But when her sister Cee is nearly one of the victims, Addie turns to Mr. Hunter, offering her help... and it soon becomes clear that the two of them working together again could lead to much more than merely solving crime.

The second book in Maggie Robinson's Lady Adelaide Mysteries series is another tightly-woven story that immerses readers in 1920's England in all its madcap, post-war glory. Robinson's characters are intriguing, complex, and so well developed that it's easy to be convinced that they must have actually lived at the time. She brings all of them to life on the page, primary and secondary characters alike. The individual characters of Adelaide and Dev continue to slowly evolve as does the budding possibility of a relationship between them and, of course, ghostly Rupert is along for the ride, providing both murder-solving assistance as well as impeccably-timed humor.

Robinson's descriptions are so vivid that they transport readers into the smoke-filled, private jazz clubs of London as well as small villages in the English countryside. In fact, her settings are so realistically depicted that, if I didn't know better, I'd wonder if Robinson hadn't invested in a time machine in order to gain a little first-hand knowledge.

The mystery itself is intricately woven, with twists and turns aplenty, keeping me reading late into the night and guessing right up until the reveal. I am so invested in these characters now and already eagerly anticipating the next Lady Adelaide mystery. I can't wait to find out what Maggie Robinson has in store for them, and us, next!

Thanks so much for having me here today, P.J! I’ve returned to talk about the latest 1920s-set cozy Lady Adelaide Mystery, Who’s Sorry Now? I love this 1922 quote from Zelda Fitzgerald: “The flapper…bobbed her hair, put on her choicest pair of earrings, and a great deal of audacity and rouge, and went into the battle.” Can’t you just see it? Young women all over the world were breaking free of society’s constraints, getting jobs, voting, dancing their nights away whenever possible. They wanted to put the hardships and struggles of the Great War behind them, if only for a little while and a big sip of champagne.

In Who’s Sorry Now, widowed Lady Adelaide isn’t quite a flapper, but her younger sister Cee aspires to be, and they both get mixed up with Bright Young People and poison. In the twenties, private clubs sprang up all over London to avoid the rigid licensing laws, so that you could drink and party all night without fear of arrest (but with fear of a hangover, LOL). Crazy antics were all the rage—midnight scavenger hunts, themed costume parties, stealing a policeman’s helmet, etc., which look so innocent now but were considered scandalous then.

Addie is too grown-up to participate in such hijinks, but of a perfect age to team up with dishy Anglo-Indian Detective Inspector Devenand Hunter of Scotland Yard to figure out who’s poisoning upper crust kids. They have extra help from Major Rupert Charles Cressleigh Compton, Addie’s late and unlamented husband, who must perform some good deeds before he’s allowed into Heaven. He has a lot of sins for atone for, yet he’s my favorite character—a 20th century rake, a cad, an inveterate ladies’ man who was also brave, reckless, and daring during the war. He is so much fun to write, and his witty arguments with Addie may drive her crazy but bring a smile to my face. I love it when readers say they wanted to dislike him but couldn’t. See, he’s charming even in death!

I also love it when people root for Dev and Addie to get together, even if their social backgrounds are so far apart. As a romance writer, I know anything is possible. But I grew up watching soap operas with my grandmother, and once the star-crossed lovers finally got together (usually after years of being married to other people, having babies kidnapped, surviving life-threatening illnesses, or some other far-fetched plot device—Marlena possessed, anyone?), they became boring. I don’t want to have that happen to Dev and Addie!

Here’s a brief snippet: “Dev had been nearly speechless last night when Lady Adelaide offered to help in the investigation.

Over his dead body. He wasn’t taking any more chances. If they hadn’t been interrupted by that nurse, he would have given her a piece of his mind, what was left of it. He’d nearly bitten his tongue clean through.

“All right, show her in. But in five minutes, come in to tell me the Commissioner is on the line.”

Dev didn’t ask Bob to lie for him often, but in this instance, it was self-preservation. He didn’t trust himself. All Lady Adelaide had to do was bat her eyelashes behind her tortoise shell spectacles, and Dev was very much afraid she’d lure them both into peril.

She was looking more rested this morning, in a powder blue lightweight wool suit trimmed in blonde mink. A matching hat was perched upon her golden head. The calendar might say it was spring, but it felt more like winter. Today was damp and cold, a miserable day to match his mood.

Dev swore softly to himself. This could not possibly go well unless he threw a rug over her to stop him from being blinded by her beauty.”

Do you like a little mystery with your romance, or a little romance with your mystery? The Scotland Yard detective wants to know!

One randomly chosen person leaving a comment before 11:00 PM, June 19 will receive a signed hardcover copy of Nobody’s Sweetheart Now, the first book in the series, or any trade paperback from my backlist. 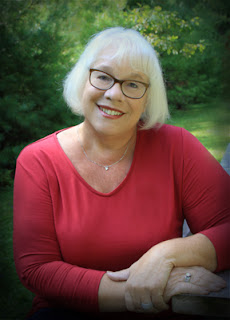 Maggie Robinson is a former teacher, library clerk, and mother of four who woke up in the middle of the night absolutely compelled to create the perfect man and use as many adjectives and adverbs as possible doing so. A transplanted New Yorker, she lives with her not-quite-perfect husband in Maine, where the cold winters are ideal for staying indoors and writing.