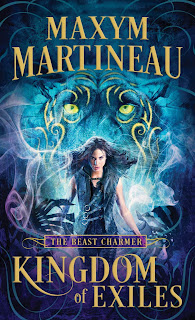 My heart wasn't part of the deal when I bargained for my life,
But assassins so rarely keep their word.
Exiled Charmer Leena Edenfrell is running out of time. Empty pockets forced her to sell her beloved magical beasts-an offense punishable by death-and now there's a price on her head. With the realm's most talented murderer-for-hire nipping at her heels, Leena makes Noc an offer he can't refuse: powerful mythical creatures in exchange for her life.
Plagued by a curse that kills everyone he loves, Noc agrees to Leena's terms in hopes of finding a cure. Never mind that the dark magic binding the assassin's oath will eventually force him to choose between Leena's continued survival...and his own.

Fantasy romance, fantasy of any type, actually, is not my usual cup of tea. When I attended Book Lovers Con in May, a debut fantasy romance was included among the books in my registration bag. The back cover blurb was interesting and after chatting with the author at one of the conference events, I asked if she'd be interested in doing a Q&A for the blog. Which meant, of course, that I'd need to read the book. Though intrigued by the premise, knowing my history with fantasy, I opened the first page with the hope that I would enjoy it; that it would hold my attention. I did not expect to become so completely immersed in the story, so fully invested in the characters, and their journeys. I did not expect to care so. darn. much. But, Martineau brings her fantasy world to life with vivid descriptions that convince me such a place really does exist. She creates characters - human, beast, undead, and more - with care and complexity, giving them surprising layers, unexpected depths, and a range of emotions that stirred my own.

The first few chapters are a bit slow as I find to be the case with many novels that are first in a new series. There's world building to be accomplished, stages to be set, characters to be introduced, but once Leena reaches the assassins, the story takes off and, for me, not reading was not an option. At about the 60% mark, barely able to keep my eyes open, I went to bed, plugging my Kindle into the charger, intending to finish the book the next day. It stayed on the charger for about five minutes while I tossed and turned in bed. I couldn't stand it. I had come to care deeply for these characters. They were in peril and I had to know what happened next. I pulled the Kindle off the charger and dived right back into the story, not looking up again until I reached the final word around 2:00 AM. Then, I stayed awake for at least another hour, thinking about the characters, the beasts, everything that had happened and what, possibly, might come next. I'm still thinking about them almost three weeks later.

If this is an example of Martineau's storytelling skill as a debut author, I can't wait to find out what's in store for readers a few books down the road. I am all in, happily hooked, and eagerly anticipating every future book with Maxym M. Martineau's name on the cover.

Q&A with Maxym M. Martineau
Welcome to The Romance Dish, Maxym! Thank you for taking the time to visit with us today.

Thank you so much for having me! I’m happy to be here.

Congratulations on the release of your debut novel, Kingdom of Exiles. I just finished reading it (way past my bedtime) and have spent the past few days telling everyone I know that they have to read this book. Please tell our readers what they can expect from Kingdom of Exiles.

You can’t see me, but I just did a happy dance in my room—I’m so glad you enjoyed it!
Kingdom of Exiles is an adult fantasy romance full of assassins, magical creatures, beast charmers, black-market deals, secrets, and of course, lots of kissing. The story follows two main characters: Leena Edenfrell, an exiled beast charmer, and Noc, leader of the undead assassins guild, Cruor.
After being exiled from her home, Leena is forced to sell her beloved magical creatures on the black market to survive. Unfortunately, this results in a bounty placed on her head. Enter Noc, the realm’s deadliest murderer-for-hire. When he captures Leena and moves in for the kill, she strikes a bargain with him: four magical beasts in exchange for her life. He agrees, not only because these creatures could protect his guild, but because there are whispers of a magical beast that has the ability to grant any wish—something he desperately wants in order to remove a decades-old curse that threatens those he loves.
Leena, Noc and his three closest brethren set off on a beast hunt across the continent of Lendria. But traps capture more than beasts, and ensnared hearts are hard to untangle. With the people behind Leena’s bounty calling for her head, and Noc’s deadly curse making itself known, no manner of beasts or magic can protect their hides.

Which character (human or beast) in Kingdom of Exiles was the most difficult to write and why? Which was the most fun?

Ohhh, that’s a tough one. All of the characters were pretty well-developed in my mind before I sat down to write them, so their mannerisms and nuances flowed nicely during my drafts. I do a lot of pre-writing and character profiles, so I think that helped. Which means, I’d probably say writing the beasts was more difficult. Figuring out ways to describe their size, shape, characteristics, etc., in a fantasy world where our modern-day terms might not translate was difficult. The hardest? Probably the Scorpex, a scorpion/worm amalgamation.
The character who was by far the most fun to write was Kost. Don’t get me wrong, I definitely love my main characters, but Kost is such an emotional touchstone, and I love his mannerisms.

I was fascinated by the beasts in this novel and Leena’s perfect pairing of them with their eventual owners. What type of beast would you create for yourself? Why?

What a great question! Hmm… Prior to getting my degree in English literature, I was actually studying animal behavior. I had a dream of doing field research on large cats—tigers, specifically. You can probably guess where I’m going with this, hehe. Basically, my admiration for these predatory felines translated into the legendary feline beasts in Kingdom of Exiles. So if it’s not the Myad, then it’d be another feline of that caliber, possibly resembling a tiger with some magical characteristics. (Fun fact: I have a Japanese-style tiger tattooed on my leg.)
I’d also take a Groober in a heartbeat. A beast that can help me sleep and is super cuddly? Sign me up!

Your bio says you enjoy binge-watching television shows. I’m always on the lookout for new series to watch. What do you recommend?

I love any show that deals with magic, the supernatural, some sci-fi, or romance. Recently, I devoured The Umbrella Academy in about two days. I’m also an avid fan of Jensen Ackles, and therefore Supernatural. Others include Game of Thrones (minus this last season…sigh), Westworld and Trueblood. Being Human, Teen Wolf and Lost Girl were all up there for me for a while, but life happened, and I stopped watching. Maybe one day I’ll pick ‘em back up!
Where I reeeaallly binge is with anime. My Hero Academia, Hunter x Hunter, Tokyo Ghoul, Seven Deadly Sins, Fairy Tail, Death Note, Re: Zero, Sword Art Online… I know I’m forgetting some major ones, here, but those first three are my favorite.

Speaking of television, I think Kingdom of Exiles would make a fabulous series or series of movies. Who would be your dream cast if that were to happen?

That would be SO amazing. I’d love to see my story brought to life! I recently just had this discussion with my team, and we came up with a working list. Let me tell you, this was incredibly difficult for me to do, and I feel like there are caveats for all of them (no one is Noc!). Anyway, here’s the breakdown:
Leena—Gal Gadot
Noc—Jonathan Rhys Meyers (but a young JRM) or Francois Arnaud
Kost—Robert Sheehan (please, oh please!) or Ezra Miller
Ozias—Winston Duke
Calem—Jason Mamoa or Chris Hemsworth

Many questions are answered by the end of Kingdom of Exiles but some threads are also left dangling which, of course, has me already eagerly anticipating book two. How many books are planned for the series? When can readers expect the next book to be published?

Drum roll, please! There are… SIX books expected for the Beast Charmer world! The first three follow Noc and Leena’s story specifically, so those threads? They’ll definitely get their pretty bows by the end of it. As for books four, five, and six… You’ll have to wait and see what they entail! Book two, The Frozen Prince, comes out in February of 2020.

Will you be attending any book signings or events this summer where readers will have an opportunity to meet you?

Yes! I have two local signings set up in Arizona. One at the Barnes & Noble in the San Tan Mall location (June 29) and the other at Changing Hands Bookstore in Phoenix (July 9). There is also the potential that I’ll be traveling out of state for something, but that’s still in the works. Keep an eye out on my social media or website for more updates.

A lot! I feel like my TBR is never-ending. Right now, I’m reading A Princess in Theory by Alyssa Cole (and I’m loving it). After that, I’d like to dig into Red, White & Royal Blue by Casey McQuiston; The Right Swipe by Alisha Rai; and Children of Blood and Bone by Tomi Adeyemi. I’m hoping I can get to all of them during my crazy schedule!

Thank you, Maxym! I appreciate you taking the time to visit with us today and, again, congratulations on the publication of your debut novel. Do you have anything else to add? Would you like to ask our readers a question?
It was a pleasure! Thanks again for having me. Hmm… I’d love to hear from everyone about their favorite fantasy romance, paranormal romance, YA fantasy, or something along the likes of those genres! I’m always trying to expand my reading list.

I came home from Book Lovers Con with two signed copies of Kingdom of Exiles to share with Romance Dish readers. Two people who post a comment before 11:00 PM, June 28 will each receive a signed copy of the book. (U.S. only)
And, because I was so blown away by this book and want you all to have an opportunity to share in that experience, a third randomly chosen person posting a comment before 11:00 PM, June 28 will receive their choice of a Kindle copy of Kingdom of Exiles or a print (unsigned) copy (open to all addresses serviced by bookdepository.com).