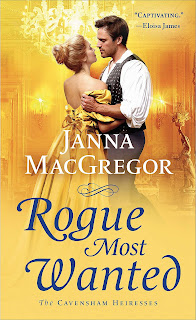 Wanted: an engagement of convenience. Found: A noble suitor.
Raised on a remote Scottish estate by her adoring grandfather, Lady Theodora Worth has inherited an earldom as well as the land itself. But when an upstart duke challenges her claim to the title and the Ladykyrk estate, Thea is suddenly in need of a husband—in name, at least. An elderly neighbor with a thoroughly modern sensibility and a dashing great-nephew just might be the answer to Thea’s prayers. Except she has no intention of marrying the first man she meets. That would be utterly ridiculous.
It just can’t be him. . .
Lord William Cavensham is entirely too devoted to his family’s estate—ever since he was jilted as a lad--to wed, but he agrees to meet the woman his aunt has taken under her wing—and introduce her to possible suitors. But after just one meeting with beautiful, spirited Thea, Will is determined to help her reclaim her title. And even more so, he can’t stop thinking that perhaps marriage to this bold, passionate woman may be the one thing he’s been missing all along?

I've been enjoying this series since book one but I have to admit, Lord William Cavensham has not been one of my favorite characters. In the earlier books, he's been opinionated, out-spoken, a bit of an instigator, and not much help in his siblings' journeys to their happily-ever-afters. The opposite, actually. So, when I discovered he was to be the hero of Rogue Most Wanted, I was curious to see how his character would develop, learn what had made him so love averse, and discover if my tepid feelings toward him could be changed. Did MacGregor hit the mark? Let me put it this way. Rogue Most Wanted, my least-anticipated book in The Cavensham Heiresses series is now my favorite. I've read it twice. It's made me cry, twice. There's a good chance I'll revisit it again. Probably cry again too. And laugh. And smile. And sigh.

But Will's evolution isn't the only reason this book was such a joy for me to read. In Thea, MacGregor has created one of my favorite heroines this year. She's intrepid, selfless, vulnerable, but strong when it counts, loyal, and worthy. Worthy of her title, worthy of a family, worthy of a true, lasting, love. I want to hug her, hang out with her, and cheer her on. I want to be her friend.

One of the things I have most enjoyed about MacGregor's writing is her ability to create fully-formed, complex, flawed characters who come to life on the pages of her books. That skill is on full display in Rogue Most Wanted, not only with Thea and Will but also a richly portrayed, fully developed secondary cast. Two of my favorites are Will's Aunt Stella, Lady Payne, a meddling, matchmaking grand dame who adds a wonderful dash of humor - I definitely want to hang with her - and his father, the Duke of Langham, who captured my heart with his kindness to Thea and love for his family.

Rogue Most Wanted is the fifth book in The Cavensham Heiresses series. While many of the couples from prior books move in and out of the story, MacGregor has written this book in such a way that it can easily be read, and enjoyed, without having read the other books first. Though I do enthusiastically recommend all five.


When you read a romance, do you typically connect more with the hero or the heroine? Or with both as a couple?

Have you read any of the Cavensham Heiresses books?

Do you have a favorite book or character in the series?

One randomly chosen person who leaves a comment before 11:00 PM, June 30, will receive a print copy of Rogue Most Wanted.