Review - - A Touch of Forever 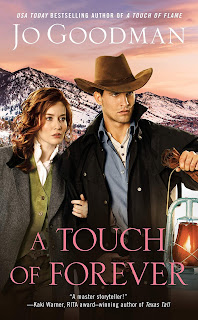 Lily Salt has sworn off men. After finally gaining her independence, the last thing she needs is another man telling her what to do. But the handsome railroad engineer from New York isn’t at all what she expected. He’s kind, gentle...and tempting enough to make her wonder what a second chance at love might be worth.

A self-acknowledged black sheep, Roen Shepard knows what it means to feel alone. Recognizing a kindred spirit in the reserved widow whose fascinating blue-green eyes have seen too much, and charmed by the warmth of her ready-made family, the two begin an unlikely friendship.

When a complication from his past follows him to Frost Falls, Roen proposes a mad scheme to protect the new life he’s built and keep the stubborn woman he’s accidentally fallen for close--a marriage of convenience. But Lily has secrets of her own, and the closer he gets to uncovering them, the more he comes to realize that the only truth that matters is the secret to unlocking her heart.

Lily Salt was one of the unforgettable characters in A TOUCH OF FLAME, one in which I hoped she may get her own happy ending due to the fact she surely had suffered enough. (In real life, it is acknowledged life is unfair and unchangeable, but in fiction, it is a sacred compact that readers want justice for their characters. Well, except readers of G.R.R. Martin--those readers know better.)

Lily is a widow with four children: Clay, Hannah, Ham and Lizzie; and she cares for her kids by doing sewing for a local seamstress. She’s able to make ends meet; and the family is far more stable than it was when she was married to an abusive alcoholic. Clay is the oldest, not quite a teen, and very much the man of the house. He is protective of his mother and is always looking for ways to bring in more income to their family.

Clay makes himself known to the new-to-town railroad engineer, Roen Shepard, who has come to survey the land and evaluate the best place to put the new railroad line, connecting to areas outside of the main line. Roen is from back East, the middle son of a bohemian family of artists, and is used to being the outsider treated with suspicion. He offers Clay a job as an assistant, promising Lily that he would make sure the work would not interfere with Clay’s schooling and would in fact build upon it, requiring an aptitude for math well-beyond most schooling in the area. She reluctantly agrees to a trial basis.

Soon Roen realizes the real math whiz is Lily, and with some persuasion he gets Lily to help him on his surveying trips. Additionally, while he is working and building trust with the family, he encounters a “blast from his past” that is sure to put a crick in his style--and which he decides to handle by offering Lily a marriage of convenience. After all, if the woman in hot pursuit of him finds out he’s already married, she’ll have to go home, right? (Seriously, do men think?) Lily, for reasons of her own, agrees to the marriage of convenience; and soon the marriage becomes anything but convenient. And despite being married, the woman Roen is trying to get rid of still refuses to leave.

Between being shot at while surveying the best place to lay track and becoming a suspect in the murder of the woman he was trying to avoid in the first place, Roen’s problems get bigger and bigger, not the least of which, how to win the trust and love of the woman he conveniently married. Lily’s growth in the story stems from growing out of her fear of living and dealing with her PTSD from her previous marriage--and it’s a joy to read. Jo Goodman does a good job of creating little scenes that layer in so much emotional meaning and impact for the relationship.

AND...we have a sweet secondary romance that almost steals the show as well as interactions with beloved characters from the previous installments of Frost Falls. All in all, a wonderful installment of this series. Worth the read.