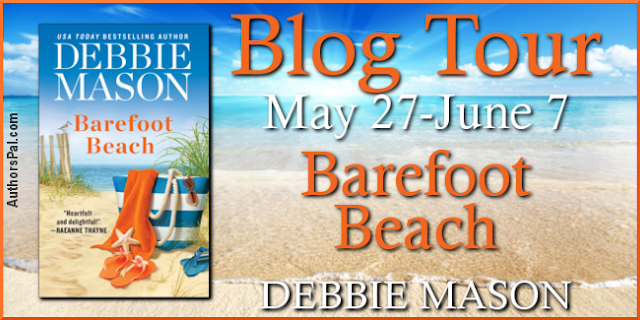 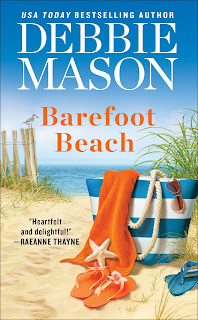 Can a summer of love make up for a lifetime of secrets?
Wedding fever has taken over Harmony Harbor this summer, and the local matchmakers have set their sights on Theia Lawson, a former navy pilot who's in town for a stay at Greystone Manor. And while Theia's got her reasons to put this small town behind her as fast as she can, there's a certain tall, dark, and irresistible man that she can't seem to get off her mind.
Firefighter Marco DiRossi wants to beat the matchmakers at their own game so he conspires with Theia to pretend they've already fallen in love. It's only for the summer. What could go wrong? Yet as the beach season draws to a close, Marco and Theia find their pretend relationship has led to very real attraction. But when a secret from the past is revealed, jeopardizing everything they hold dear, can this unlikely couple find their way to a happily-ever-after?

I'm sad to see this series winding down but happy that Debbie Mason has saved some of the best stories for last. I adored Marco and Theia and their journey is in my top three favorites of the eight Harmony Harbor books published so far. This book is a wonderful blend of action, romance, humor, mystery, family secrets, snappy dialogue, unexpected betrayal, and finding love where you least expect it. Long-held secrets are revealed, unexpected secrets come to light, and sexy firefighter, Marco DiRossi finally meets his match in a tough - but vulnerable - former Navy fighter pilot. I couldn't get enough of these two!

Barefoot Beach kept me reading way past my bedtime and, already, I want to go back to the beginning to revisit Marco, Theia, and everybody else in Harmony Harbor. If you're a fan of the Harmony Harbor series, you won't want to miss Marco's and Theia's journey to love as well as the revealed secrets and mysteries solved in this book. If you're new to the series, Barefoot Beach can be read and enjoyed on its own but I believe you will more fully appreciate the magnitude of some of the events and actions of secondary characters if you've read the previous books. The final book in the Harmony Harbor series will be Christmas in Harmony Harbor, due for release on October 1, 2019.

Have you been reading the Harmony Harbor series? Do you have a favorite book or couple in the series?

In addition to being a top notch firefighter, Marco DiRossi also knows his way around a kitchen. Do you like a hero (in books or real life) who enjoys cooking for his loved ones?

“Cessna Citation one three five, ready for landing.” Theia didn’t have to state the runway. It was a municipal airport with only one runway, which could be tricky with crosswinds. She was okayed to land. Her heart pounded at the line of fire trucks and ambulances awaiting their arrival.
She prayed they didn’t need them.
Her prayers were answered. As soon as they’d taxied to a stop, she unbuckled her seat belt and stood. She locked her shaky legs, fisted her trembling fingers, and gritted her
teeth when a wave of dizziness washed over her.
“Get the Gallaghers off as quickly as possible and hold back the fire department. I want a chance to deal with this on my own.” The last thing she wanted was for them to tear her new baby apart for no reason.
“You need to get your head looked at. Let the professionals…All right.” Caine held up his hands and then grabbed his black uniform jacket off the back of the seat. Recovering his black hat from the floor, he fitted it on his head and pulled the brim low. “On this plane, you might be
the boss, but I’m your boss on the ground. You’re getting checked out whether you like it or not.”
Theia rolled her eyes as she followed him out the cockpit door and then winced. Maybe she wouldn’t fight too hard when he demanded she let the paramedics look her over. She didn’t have to worry about him getting the Gallagher party off the plane immediately. They did that all
on their own with murmured goodbyes.
No apologies or thanks for the ride, she noticed. Though she supposed she couldn’t blame them. She wasted less than a second thinking about the Gallaghers and moved to the seat where the little pyromaniac had been sitting. No sooner had Theia pulled back the carpet than she heard the clump of heavy boots in the aisle. She lifted her head to peek between the seats. A firefighter in full gear filled the space. She gave a panicked yelp at the sight of the hose in his hands and shot to her feet.
“It’s all right. I—” A blast of water knocked her on her butt. 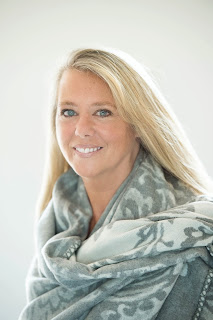 Debbie Mason is the USA Today and Publishers Weekly bestselling author of the Christmas, Colorado series and the Harmony Harbor series. The first book in her Christmas, Colorado series, “The Trouble with Christmas,” was the inspiration for Hallmark’s “Welcome to Christmas.” Her books have been praised by RT Book Reviews for their “likable characters, clever dialogue, and juicy plots.” When Debbie isn’t writing, she enjoys spending time with her family in Ottawa, Canada.


a Rafflecopter giveaway
Posted by pjpuppymom at 12:30 AM