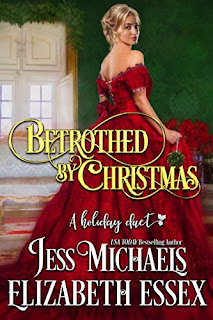 I love the holidays and my favorite part – aside from the food – yum, those seven fishes and roast beef with all the trimmings. I digress. My favorite part of the holidays are Christmas romances. And though I loathe to see holiday decorations in the stores, I look forward to Christmas romances filling my hands as early as October. Betrothed by Christmas by Jess Michaels and Elizabeth Essex duet, a romance novella duet, is a five star, hot, hot read that fits the bill.

I have been a fan of both authors for many years. Their stories are connected by the heroines Evangeline and Tamsin who we meet over a bowl of flaming brandy. I kid. They watch as lackwit lords haul the bowl into the ballroom and prepare to burn off a brow or two as they try to catch a flaming raisin. They both agree that a life of independence is far better than marrying any one of these gents. As young ladies of the ton, they have little choice in this area. Or do they?

The answer to their individual dilemmas is for them to seek out MALE WALLFLOWERS! Hold the phone! Not a rake? Not a rouge? You heard it right, male wallflowers. Where does one find one? Against a wall? By a potted plant? Nope. The library where you’d be surprised to find more than one or two.

Jess Michaels’ “A Lady’s Gift for Seduction” has you cheering for Evangeline and Henry from the first moment Evangeline, the daughter of a duke, approaches Henry, an astrologer and a third son of a viscount. Henry has lived across the park from her father for many years. She hopes to marry and keep her independence and control over her life. Her dowry guarantees that Henry can pursue his research while she continues to be in control of everything else. Both are in for an eye-opening experience as they come to find they are so much more together.

Elizabeth Essex’s “A Lady’s Gift for Scandal” brings Tamsin and Simon. Tamsin wants nothing more than an independent life much like her aunt who holds salons and does as she pleases. Her aunt came to this lifestyle following a scandal and that’s just what Tamsin thinks she needs. Not a huge scandal, just a slight one. That’s where Simon comes in. He seems a retiring sort who presents to the ton as somewhat simple since returning from the war. Our man Simon has built up a reputation that keeps others at bay but not Tamsin whose arrangements bring them both exactly what didn’t know they needed all along.

Go ahead, snuggle on the couch with a throw, sip your pumpkin spice latte and enjoy Betrothed by Christmas!