Review - - Get a Life, Chloe Brown 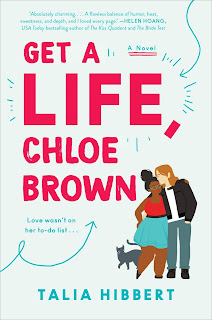 Chloe Brown is a chronically ill computer geek with a goal, a plan, and a list. After almost—but not quite—dying, she’s come up with seven directives to help her “Get a Life”, and she’s already completed the first: finally moving out of her glamorous family’s mansion. The next items?
But it’s not easy being bad, even when you’ve written step-by-step guidelines on how to do it correctly. What Chloe needs is a teacher, and she knows just the man for the job.
Redford ‘Red’ Morgan is a handyman with tattoos, a motorcycle, and more sex appeal than ten-thousand Hollywood heartthrobs. He’s also an artist who paints at night and hides his work in the light of day, which Chloe knows because she spies on him occasionally. Just the teeniest, tiniest bit.
But when she enlists Red in her mission to rebel, she learns things about him that no spy session could teach her. Like why he clearly resents Chloe’s wealthy background. And why he never shows his art to anyone. And what really lies beneath his rough exterior…

Go read this book if any of the following applies to you:

1.    As a reader, you are parched for reading material with intersectionality of current issues. For instance, if you want to read more diverse romance that features people of color, other-abled people, and/or heroes whose life goal is to get a life rather than save mankind from an alien invasion--this is such a book.
2.    As a reader, you are parched for heroes who have ginger hair. (I mean, aren’t we all going through some Outlander withdrawal? Don’t we all want a little Prince Harry magic in our lives? Well, this guy is without a title, but he does come with a motorbike, which is preferable, if you think about it.)
3.    If you would like to read for a change about heroines who struggle with an “invisible illness” and this illness is dealt with in a realistic way rather than allowing for a miraculous cure.
4.    If you’d like to read about a really hot artist who paints with his shirt off.
5.    If you like to read books with pets in them, Smudge is flat out adorbs!
6.    If you are frequently impressed with authors who can match characters who have similar obstacles to overcome, but overcome them in different ways without being complete knobs while doing it.
7.    If you like sarcasm…(I might be in more of a minority here...but heroine is sassy and sarcastic.)
8.    If you ever rooted for the heroine who wasn’t the perfect size, the perfect background, the perfect health/race/religion/et al and got all the love from the hero, this is the book.

The book also comes with the right amount of secondary characters to color the characters lives and alert the readers that there may be more books in the offing. I also want to note that unlike a book or two in my recent reviewing past that were great at the diversity angle but failed to warn me about a less than happily ever after for all the characters, this book does not have this problem. This book, while dealing with real issues, manages to do so in a trigger-free environment.

And honestly Red is so damned dreamy, he’s worth reading for him alone, but I assure you, Chloe is a friend you’ll wish you had. Happy reading!