Review - - To Tame a Scandalous Lady 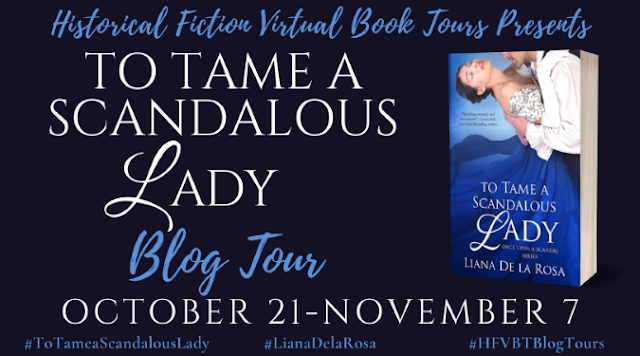 To Tame a Scandalous Lady
by Liana De la Rosa
Once Upon a Scandal - Book 3
Publisher: Entangled:Amara
Release Date: October 21, 2019
Reviewed by PJ 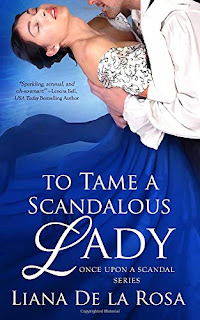 In the wake of a fire that decimates his racing stock, Christian Andrews, the Marquess of Amstead, struggles to keep his family's stud farm from slipping into ruin and painstakingly rebuilds the program. When one of his prime stallions is injured, he notices his new assistant trainer has a special way with the horses. As talented as the trainer is, once he realizes he is a she…and a very beautiful, spirited she at that…he should sack her before scandal breaks. But it’s only weeks before the high stakes race he’s counting on to build back his fortune, and Flora should be by his side for the win.
Miserable under the weight of the ton’s expectations, headstrong Lady Flora Campbell laments her privileged life in London. Embracing her dream of working with racehorses, she disguises herself as a lad and slips away to learn as much as she can from England’s premiere expert, Christian Andrews, never thinking of the scandal she courts but the glory to be had.
Although she develops a tendre for the dashing marquess, she can never let on that she’s not only a woman, but the daughter of a duke...

I enjoy how De la Rosa gives her characters depth, realistic flaws, and seemingly insurmountable obstacles to overcome. I like how she challenges societal norms for the time in which she writes. And I love how she draws me into a story and into her characters' hearts and minds.

Though Flora (a/k/a William) is the daughter of a duke, growing up in Scotland she was allowed to indulge her life's passion training horses and pretty much running her father's estate. But when she arrived in London with her siblings, that all changed and she was forced to give up the work that gives her purpose...that feeds her soul. I understood what drove her to disguise herself and seek employment with the man acknowledged to be the best horse trainer in England and I cheered her on as she did so. But I also appreciated the fact that she is not without flaws. I enjoyed her growth throughout the book and the (sometimes painful) lessons she learns.

I also liked Christian even though at times I wanted to whack him upside the head. He's an autocratic male who thinks he knows best but he's also desperate to save his family's estate, while at the same time dealing with a fair share of grief and guilt over the events that have led him to this point. I liked the friendship that develops between him and Flora, the sizzling chemistry, and the mutual respect. I enjoyed watching them work together to train Asad. But I also understood the changes to those opinions and actions once William became Flora - even if I didn't much like them. The author has kept him authentic to the time in which he lives while also allowing him the room to evolve and change some of those opinions over the course of the story. I enjoyed his growth and turned the final page confident in his and Flora's happy future.

De la Rosa has also surrounded our hero and heroine with an intriguing cast of secondary characters, both two and four-legged. I especially enjoyed Mr. Mubarek, the head trainer who came from Egypt with Asad, a canny elderly duchess, and both Christian's and Flora's brothers. I'm hoping we might see more of both Cedric and Niall in future books. As for those four-legged characters... The vast majority of this novel takes place in and around the stables on Christian's estate which adds another interesting layer to the book. I fell in love with Asad and his stable-mates right along with Christian and Flora. They are each lovingly, and realistically, depicted and I enjoyed getting to know each of their unique personalities.

While this is the third book in a series, it stands well on its own. 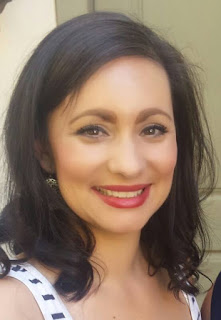 Liana De la Rosa is a historical romance writer whose stories are set in the Georgian and Late Regency periods. As a longtime fan of the romance genre, Liana can remember sneaking Harlequins into her bedroom to read on the sly. After her second child was born, her husband challenged her to write her own book and she’s been writing ever since. Liana is a proud graduate of the University of Arizona and enjoys cheering on her alma mater in all things (BEAR DOWN!). When she’s not writing witty heroes, saucy heroines, and secondary characters screaming for their own stories, she’s a wannabe domestic goddess and fashionista who wrangles a rambunctious brood of small children with her patient husband in Arizona.

To Tame a Scandalous Lady
Posted by pjpuppymom at 12:30 AM