Review, Q&A, and Giveaway - - The Lady's Deception by Susanna Craig 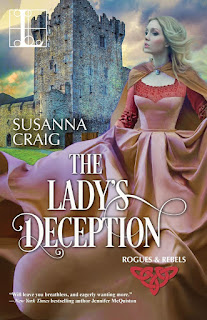 Can a runaway English bride find love with a haunted Irish rebel? Paris Burke, Dublin’s most charismatic barrister, has enough on his mind without the worries of looking after his two youngest sisters. The aftermath of a failed rebellion weighs on his conscience, so when the young English gentlewoman with an unwavering gaze arrives, he asks far too few questions before hiring her on as governess. But her quick wit and mysterious past prove an unexpected temptation. Rosamund Gorse knows she should not have let Mr. Burke think her the candidate from the employment bureau. But after her midnight escape from a brother bent on marrying her off to a scoundrel, honesty is a luxury she can no longer afford. With his clever mind and persuasive skill, Paris could soon have her spilling her secrets freely just to lift the sorrow from his face. And if words won’t work, perhaps kisses would be better? Hiding under her brother’s nose, Rosamund knows she shouldn’t take risks. If Paris learns the truth, she might lose her freedom for good. But if she can learn to trust him with her heart, she might discover just the champion she desires . . .

Susanna Craig has penned another enjoyable installment in her Rogues and Rebels series featuring the Burke family of Ireland. After reading the first two books in the series, I was left wondering if Paris would be able to engage my emotions as much as his sisters had. He was a very angry man and I didn't much like him. By the time his book begins, the anger has mellowed somewhat though other emotions have surfaced that leave him struggling with guilt and remorse. Craig excels at creating complex characters with layers of emotion that are gradually revealed as their stories are told and drawing me into their thoughts and their journey. By the time this book ended, I was firmly in Paris's corner and cheering him on to familial reconciliation and a happy ending.

I admired Rosamund's determination to not be forced into an untenable position by her brother and the lengths she was willing to go to avoid it. I enjoyed the chemistry between Paris and Rosamund, the banter between them, and the attraction they both dance around.  I enjoyed her intelligence, her creativity, her growth throughout the book and the self-confidence that blossoms within her after she impulsively jumps into the unexpected position of governess to Daphne and Bell. And those two! I adored them and am keeping my fingers crossed that sometime down the road Craig may decide to give the grown-up Daphne and Bell stories of their own.

As with her other books, Craig's impeccable research shines through in The Lady's Deception. She always gives me an emotional romance but the history within which those romances are set never fails to enrich my base of knowledge. I've thoroughly enjoyed her foray into Ireland and learning more about their struggles with the British while, at the same time, falling in love with the eclectic Burke family. I can't wait to find out what she has in store for readers next.

Thanks for having me, PJ! It’s lovely to be here again.

The Lady’s Deception, the third book in your Rogues and Rebels series will be released tomorrow. What should readers expect in this story?

It’s a forbidden attraction story between a tormented Irish barrister and an Englishwoman on the run from a disastrous match. She pretends to be the governess he hired for his younger sisters, while he pretends not to be falling for her. It is a stand-alone story, though if you’ve read the first two Rogues & Rebels books, you’ll also get to catch up with the rest of the Burke family.

One of the facets of your writing that I always enjoy is the well-researched historical detail. What have you uncovered in researching your books that has most surprised – or fascinated – you?

Thank you so much! I love to do research, and I also get some help from my husband, who is a historian. For this series, my research has included some serious subjects (the United Irishmen’s Rebellion in 1798, a horrifically violent and ultimately failed attempt to secure Irish independence from British rule), some exciting ones (spying during the Napoleonic era—I even took a workshop on secret correspondence!), and some fun ones (botany, especially). While researching The Lady’s Deception, I learned that in the late eighteenth century, some Dublin barristers were such a hot commodity, ladies went to the trials to watch them at work, hoping to catch their eye. You can bet that detail made its way into the story!

It was fun getting to know the younger Burke siblings, Daphne and Bell, in this book. They darn near steal every scene they’re in. Do you have any plans for them down the road?

They were a lot of fun to write (and my daughter, who is nine, was a live-inspiration for a lot of the girls’ antics)! I don’t have any official plans for them, but I would love to bring them back in a later series, when they’re all grown up. They would surely set proper society on its ear!

I love that so many of your books are set outside the typical social sphere of London. They make me want to pack my bags and travel to craggy seaside villages, sultry Caribbean islands, and verdant country locales. If money were no object, what country or area would you most want to explore? Would you lean toward the cities or more rural locations?

I spend a lot of time on the settings of my stories, so I love it when readers enjoy those elements. As far as where I’d explore? That’s a tough choice! It would be amazing to see Italy, China, Japan, Australia and New Zealand…I really can’t pick. I am generally more of a country girl, and most of my travel pics are landscapes, but I do love to visit museums and historic sites too.

Autumn temperatures have finally arrived at my house and I’m immersing myself in everything I most enjoy about this season, like homemade soups, football, apple-cider scents, and apple desserts. Which season is your favorite? Do you have signature scents for each season? Favorite comfort foods?

For me it’s a tie between autumn and winter, and you’ll find my house smelling of cinnamon and spice at least half the year! Cold weather is a great excuse to make things cozy—hot chocolate, a fire in the fireplace, a snuggly blanket or sweater, and a good book, of course! Just yesterday, I decided it was finally cool enough to make soup in the crock pot, and I’ll be ready to bake for the holidays before long.

What’s on your writing horizon? Do you have a new series in the works? Are you able to share any information about it?

I do have a new series in the works! It’s called “Love and Let Spy” and the stories will be my Regency takes on classic 1980s TV suspense. The first book was inspired by Magnum PI: a Scottish intelligence officer unexpectedly inherits an earldom, but finds his castle inhabited by a persnickety Englishwoman, who turns out to be a gothic novelist in need of his protection. Look for Who’s That Earl in fall 2020.

Thank you for visiting with us today, Susanna, and thank you for introducing us to the Burke family. I have thoroughly enjoyed traveling their journeys to love with them. Is there anything you’d like to add? Would you like to ask my readers a question?

Thank you again for having me at the Romance Dish! I would love to hear what everyone is looking forward to this fall. And I have copies of the first two Rogues & Rebels books, The Companion’s Secret and The Duke’s Suspicion, for one lucky commenter (ebook or print; US shipping only for print).