Review - - When the Marquess Was Mine

WHEN THE MARQUESS WAS MINE
by Caroline Linden
Publisher: Avon
Release Date: September 24, 2019
Reviewed by Hellie 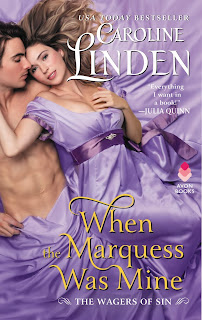 In the game of love…
Georgiana Lucas despises the arrogant and cruel Marquess of Westmorland even before learning that he’s won the deed to her friend Kitty’s home in a card game. Still, Georgiana assures Kitty the marquess wouldn’t possibly come all the way to Derbyshire to throw them out—until he shows up, bloody and unconscious. Fearing that Kitty would rather see him die, Georgiana blurts out that he’s her fiancé. She’ll nurse the hateful man back to health and make him vow to leave and never return. The man who wakes up, though, is nothing like the heartless rogue Georgiana thought she knew…
You have to risk it all
He wakes up with no memory of being assaulted—or of who he is. The bewitching beauty tending him so devotedly calls him Rob and claims she’s his fiancée even as she avoids his touch. Though he can’t remember how he won her hand, he’s now determined to win her heart. But as his memory returns and the truth is revealed, Rob must decide if the game is up—or if he’ll take a chance on a love that defies all odds.

The wonderful romantic tropes of Reformed Rake and Florence Nightingale collide for a delicious mashup that also uses some classic plot devices like: Pride & Prejudice, amnesia, and a bit of a spy thriller to make for a cozy, delightful, Regency set romance.

Our weary rake, Rob, doesn’t know where he is or how he got there, but the beautiful young woman who is calling him her fiance and who has stayed by his side as he’s recovered from the beating he doesn’t remember makes him wish he did remember her. Except Georgiana isn’t actually engaged to Rob--she only said he was her fiance because if the hostess she is staying with realizes who Rob really is, she would leave him on the front steps to die.

Rob’s reputation as a rake and hell-raiser precedes him as he comes to the countryside to return a property deed to the lady of the house, a property deed her husband lost in a hand of poker and has immediately written to the family he was cheated out of. No good deed goes unpunished. Georgiana interrupts a criminal thrashing during a morning ride and insists on the groom taking back the fallen traveler, but she is immediately aghast that the victim is none other than the man coming to throw everyone out of the house! She can’t explain even to herself why she lied, but even more concerning, when Rob awakes, it seems he is not Evil personified after all. Can she trust a man who doesn’t even know who he is?

Hoping Rob doesn’t suddenly recover his memory and either a) kick everyone out of the home like she fears or b) suddenly go, “Wait, I’m the Marquess--we’re not engaged” and ruin her reputation, Georgiana does a very merry dance during Rob’s recovery.

Come to find out, there is more to Rob than his title--and he’s a bit of a spy himself, doing his bit for king and country--yet it’s Georgiana who more than holds up her end of the show, making me wish there were more stories with her in which they work together to right wrongs and battle for justice, because Georgiana can certainly think on her feet...and even win the day when needed.

Caroline Linden is frequently a very solid read for me in the Regency set romances--and this one is no exception. Happy reading!

Email ThisBlogThis!Share to TwitterShare to FacebookShare to Pinterest
Labels: 5 Star Review, Avon, Caroline Linden, Hellie, Historical Romance, When the Marquess was Mine