PJ, here. I'm happy to share with you today an excerpt and giveaway of the upcoming Can't Hurry Love by Melinda Curtis. I read an advance copy of this book that launches Curtis's new Sunshine Valley series and it is so much fun - filled with laughs, sighs, a few tears, heart tugs, and more laughs. I'm looking forward to more Sunshine Valley stories! 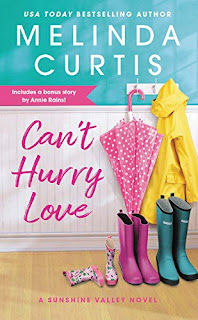 From a USA Today bestselling author comes a heartwarming romance about a city girl who finds herself widowed in a quirky small town and the new target of the town's relentless matchmaking Widows Club.
Head-over-heels in love, Lola Williams gave up everything to marry Randy, including a promising career in New York City. Now, after one year of marriage and one year of widowhood, Lola finds herself stranded in Sunshine, Colorado, reeling from the revelation that Randy had secrets she never could have imagined. She swears she's done with love forever but the matchmaking ladies of the Sunshine Valley Widows Club have different plans...Sheriff Drew Taylor also knows what it feels like to be unlucky in love. So when Lola comes to him for help uncovering Randy's hidden life, Drew finds himself saying yes against his better judgment - especially with the Widows Club eyeing them both. Soon enough, Lola is upending Drew's peaceful, predictable world...and he kind of likes it! But will this big-city girl ever give her heart to a small-town guy again?Includes the bonus novella "Kiss Me in Sweetwater Springs" by Annie Rains!

Before Drew could bicker and eventually cave in to feeding his sister, he heard Mims announce the next date being offered at the auction. “Lola Williams.”

Catcalls and hollers of appreciation practically raised the roof of Shaw’s Bar & Grill.

Lola stepped into the spotlight, wearing a shimmery white cocktail dress and high-heeled white sandals that weren’t made for walking. Her long brown hair fell in lustrous waves over her shoulders. She looked like an angel, until you saw the fire in her eyes.

Buy her, a voice in Drew’s head said, probably because he valued keeping the peace, and the expression on Lola’s face was anything but peaceful.

“I’ll tell them about me.” Lola grabbed the microphone from Mims. There was a Watch-Out-World edge to her voice. “I’m Randy Williams’s wife. He used to run Your Second Husband Handyman Service.”

The crowd quieted, either because they were stumped that a woman in the date auction claimed to be married or because they saw the wild look in her blue eyes and weren’t sure whether it was a good wild or a bad wild.

Drew swore and hopped off the bar stool, pushing his way through the crowd. Passing Paul, who was waving fifties in front of his face like a fan. Passing Jason, who was grinning up at Lola. Passing a cowboy who raised his glass in Lola’s direction and spilled beer on Drew’s arm.

Drew was only halfway to the stage when Lola said, “Randy’s dead, but I want to know who my husband was handy with besides me.”

The energy in the crowd shifted from wary to predatory, like a watchful cat who’d spotted an unsuspecting mouse and was preparing to play with it before moving in for the kill.

Lola was oblivious to the target being painted on her. “Randy was handy with another woman. Or maybe another man …” She looked bewildered by this statement, as if she couldn’t quite believe it herself.

Had she been drinking? Drew couldn’t tell. She didn’t slur her words. She hadn’t stumbled across the stage.

The men on the dance floor had been drinking. The volume in the peanut gallery increased as ribald comments were tossed about like volleyballs at the beach on a holiday weekend. The crowd’s need for spectacle wrapped around Drew’s chest and squeezed. He worked harder at reaching the stage, hoping to keep his landlady from starting a riot.

Off to the side, the Widows Club board was in urgent conference. Bitsy looked up and caught sight of Drew. She nudged Mims. When Mims saw him, the apprehension on her face morphed to relief and then, as she took a glance toward Lola, to calculation.

Drew didn’t like that look. Especially when he saw Wendy in the wings wearing blue jeans, cowboy boots, and a frilly pink blouse buttoned to her neck.

“Please. I need to know.” Lola closed her eyes, as if she didn’t really want to know the truth. “Why was my husband unfaithful?”

The crowd drained of energy.

Some of the fight seemed to drain from Lola too.

Mims took advantage and reclaimed the microphone. “We’re ready to bid. Remember, Lola isn’t your average local. She’s from New York City. She does hair and makeup professionally. We’ll start the bid at one hundred dollars.”

Lola froze, staring above the crowd as if wishing she were above the mess she’d made.

With a raucous crowd at his back, Drew couldn’t afford to be distracted. “Lola.” He reached for her. “Come down.”

“How about seventy-five?” Mims didn’t seem to be working the crowd as much as she was working Drew. She smiled down at him. “Do I hear fifty?”

For God’s sake, Mims.” Drew hopped onto the stage. “We made a deal.” That the widows wouldn’t bamboozle Lola into participating.

“I didn’t bid,” Drew snapped. He took Lola’s arm and turned her toward the stairs, catching a whiff of alcohol on her breath. He nearly ran into Wendy waiting in the wings. Her gaze dropped to the floor, along with his hopes that she might be his best defense against his ex-wife Jane’s efforts to gain custody of little Becky.

“Rules are rules, Sheriff.” Mims tsk-tsked into the microphone. “Fifty dollars is a bargain and for a worthy cause. Please pay the cashier.” She gestured toward Clarice. And then she lowered the microphone, raising her voice to be heard above the crowd. “We didn’t break our agreement. Lola volunteered.” The Widows Club president glanced toward the bar. “Of course, if you want to be a stickler about it, I could take Priscilla in Lola’s place. She looks pretty tonight, and she mentioned she might be ready for some excitement.”

No way was Drew letting his sister on that stage. He paid Clarice and led Lola away as the next bachelorette was put on the chopping block.

It was a long walk to their booth. People smiled and shouted congratulations as they passed.

Lola lagged half a step behind Drew, ducking her head to avoid attention.

Drew slowly eased his grip and leaned close to her ear. “Are you okay? I can take you home if you like.”

Her blue eyes caught his, and she gave him a tentative smile. “I—“

“Hey, Sheriff,” Iggy King called from the bar, tipping back his straw cowboy hat. “Way to take advantage of a fire sale.”

Lola’s smile hardened. She quickened her steps, beelining to their table and the full flutes of champagne, as determined as his twin sisters to find trouble.

Drew was faster and body-blocked her. “You’ve had enough.”

“I’m just beginning.” Lola elbowed Drew out of her way, nothing soft about her now. “This is my date. I call the shots.” She flounced onto the bench seat.

Drew scowled. “Technically, I bought you.”

“Pity purchases don’t count.” She flung her sun-kissed brown hair over one shoulder, radiant in her Watch-Out-World indignation.

“It was a rescue.” Drew bared his teeth in a smile. Lola was exactly the kind of woman he and his sweet little daughter didn’t need—obstinate and unpredictable.

“He said, she said.” Lola raised her glass. “To the truth.” She drained her bubbly and reached for the bottle.

Drew’s hand got there first. He parked the champagne on the seat next to him.

The crowd laughed at something Mims said, and the bidding began anew. On Wendy,

“If you don’t pour me another glass, I’m going to interrogate you.” Lola fixed Drew with a steely-eyed glare worthy of the finest police detectives in New York City. “You weren’t surprised when I told you about Randy’s laundry habits today. You knew he’d strayed.”

“How much have you had to drink?” Drew countered.

“A couple pregame shots. For courage,” she added. “Did Randy use your house for his dirty deeds?”

The last thing Lola needed right now was the truth about her husband. If Drew told her there’d been two sets of headlights every few nights at the garage apartment behind his house, she’d grill each woman at Shaw’s who drove a car, including Pris.

Drew’s gaze drifted to his sister. When her marriage had begun to crumble a year or more ago, she’d separated from her husband. His mother had let slip once that Pris had found someone new. That relationship hadn’t panned out, obviously … Because Randy had died?

Pris laughed at something Noah said and ordered a beer.

Drew shook his head, refusing to believe Pris had been Randy’s other woman.

Next to his sister, Iggy stared at Lola as if he were a bird dog and she were a plump pheasant he’d startled from the brush.

Without meaning to, Drew jutted his chin.

“He did cheat at the farmhouse.” Lola sat back and raised her voice. “Did Randy host wild parties? Did you double-date with my husband? Did he dance with blow-up dolls?”

“Keep it down.” Drew took a swig of champagne. “Identifying Randy’s lover won’t make you feel any better.”

“Wanna bet?” But Lola’s words lacked fire, and she pressed her eyes closed. When she opened them, she looked at Drew with a vulnerable expression, like the one his sister Eileen got when she hit a dead end, the one with watery eyes and too much trembling around her mouth. “I just want to know. Was it a long-term affair or something intense and brief that Randy regretted? Did he think I was stupid?” She swiped his glass, raised it to her lips and then put it back down, untouched. “I have to know.” Her voice dropped to a whisper that Drew had to strain to hear. “Was it real? Did he love me?”

The vulnerability in her voice reached deep inside Drew and took hold.

His annoyance with Lola dissipated, and it wasn’t a hardship to meet her tearful gaze, to admire her fragile beauty, to hope she’d find her way past the shock she’d had today. “No one can answer that but Randy.”

Have you read any Melinda Curtis books? Do you have a favorite?

Have you ever been to a bachelor or bachelorette auction?