Review - - On the Corner of Hope and Main

On the Corner of Hope and Main
by Beverly Jenkins
A Blessings Novel - Book 10
Publisher: William Morrow
Release Date: March 3, 2020
Reviewed by Santa 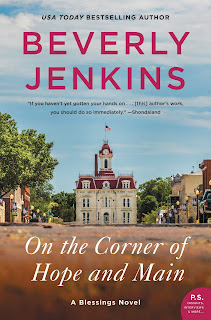 Citizens of Henry Adams, Kansas, know there’s never a dull moment in their small town…
Trent July has been the mayor of this historic town for the past four years, but now he’s ready to let someone else take up the mantle. Barrett Payne, a former Marine, decides he wants the job. But when a surprise candidate also enters the ring, the town has opinions on who would be the best candidate.
And of course that’s not the only drama, as Malachi “Mal” July continues to make reparations for the damage he’s caused and to the people he’s betrayed, especially his lady love Bernadine. Is she finally ready to forgive him and let the past go?
As the residents of Henry Adams have learned, life will throw obstacles their way, but it’s how they come together and rise above these challenges that keep the bonds of their close-knit community strong.

On The Corner of Hope and Main is the 10th installment in Beverly Jenkins’ Blessings novels. This five star book can easily be read as a stand alone because Ms. Jenkins introduces each character and a bit about who they are as they are woven into the fabric of the story at hand. Suffice it to say that many of the residents of Henry Adams, Kansas - where the Blessings novels take place - will quickly earn a place in your heart. Then there are some who will leave a queasy feeling in your belly much like that fish and chips with Asian slaw you should not have ordered from the diner last Friday night.

After all, what could happen in a small town election that has a former Marine colonel and his wife, Barrett and Sheila Payne, vying for mayor along with two-bit barber Riley Curry? He’s bankrolled by one Leo Brown, the disgruntled ex-husband of Bernadine Brown who bought Henry Adams off EBay (WHAT? YES!)  with her divorce settlement money. The answer is - PLENTY.

Bernadine Brown is well respected by many of the town’s residents. There are some who are disgruntled as happens in many small towns though not quite as colorfully as in Henry Adams. Bernadine has issues of her own to deal with. Her love, Mal July, has to prove to her that he still loves her despite how he betrayed her and so many in the town. Their struggles are as real as their true feelings for one another. You will find yourself cheering for them! You’ll find yourself cheering for Barrett and Sheila, Crystal - Bernadine’s foster daughter as she follows her dreams and sweet Gemma and her budding romance.

I grew up in a small town in the Northeast and live in one now. I could identity with Ms. Jenkins’ characters and the historical, vibrant town they live in and the lives they lead. It’s easy to fall comfortably into their world for a little while and feel welcome there. Don’t miss this or any of the Blessings novels. You’ll be happy you picked them up!