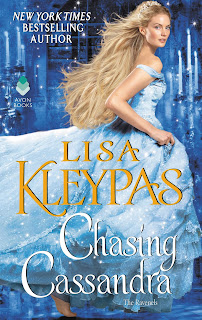 Everything has a price . . .
Railway magnate Tom Severin is wealthy and powerful enough to satisfy any desire as soon as it arises. Anything—or anyone—is his for the asking. It should be simple to find the perfect wife—and from his first glimpse of Lady Cassandra Ravenel, he’s determined to have her. But the beautiful and quick-witted Cassandra is equally determined to marry for love—the one thing he can’t give.
Everything except her . . .
Severin is the most compelling and attractive man Cassandra has ever met, even if his heart is frozen. But she has no interest in living in the fast-paced world of a ruthless man who always plays to win.
When a newfound enemy nearly destroys Cassandra’s reputation, Severin seizes the opportunity he’s been waiting for. As always, he gets what he wants—or does he? There’s one lesson Tom Severin has yet to learn from his new bride:
Never underestimate a Ravenel.
The chase for Cassandra’s hand may be over. But the chase for her heart has only just begun . . .

Santa says:
I must confess that I kept piling book upon book on my TBR pile before reading Chasing Cassandra by Lisa Kleypas. I really am not sure why. I told a friend that having plowed through that pile and, with a few stellar exceptions, what I read was mostly tepid to me. That is not to say that they weren’t hot enough but rather that they did not spark anything in me as a reader.

How could I have doubted you, Lisa Kleypas! She has always been one of my GO TO authors for more than 15 years! Chasing Cassandra is by no means a tepid romance book -far from it! THIS is a 5 star romance novel! I was engaged and all in from the very first pages to the very end!

First, let me say that I love the Ravanel family! I loved the references to all the interconnected families here, as well. What better vehicle than a wedding to reintroduce them all. That’s where we find Tom Severin, a wildly but calculatedly successful businessman attending the wedding of Pandora Ravenel to the Viscount St. Vincent. This is where his frozen heart stops at the sight of Pandora’s twin sister, Cassandra. Tom is a man who knows what he wants and sets off to pursue her. The emphatic NO that he gets from her cousin and his brother both is delivered in such a deadpan manner much as a dogged parent might respond to an equally dogged child. And that is when I laughed out loud.

Cassandra’s guardian, Devon Ravenel is best friends and business associates with Tom Severin. He knows how he operates and how he has no heart or room for love. Tom admits this. He only has five feelings which he acknowledges and love is not one of them. Dev knows that Cassandra wants and needs love, especially given how she was raised. Cassandra, for her part, cannot help noticing Tom as a more than handsome man and knows that his heart is not as frozen and useless as Tom thinks it is.

And so the chase is on, with Cassandra and a street urchin named Bazzle slowly but shortly melting Tom’s frozen heart. I wished this story could have gone on and on. I am adding this one to my keeper shelf alongside the rest of the Ravenels and my beloved Wallflower series.