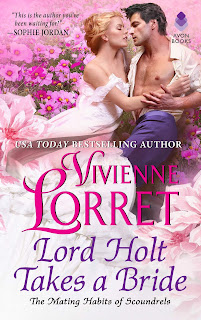 Heiress Winnifred Humphries refuses to marry the odious man her parents have chosen. She’ll marry for love or not at all. But how does a woman know a man truly loves her? Needing answers, she sets out to discover the marriage habits of London’s aristocrats. Yet when her friends kidnap a lord for research, Winn knows they’ve gone too far. Now she’s facing a wickedly handsome scoundrel who wants revenge.
Lord Asher Holt has the perfect plan to free himself of his father’s debts. But when a trio of foolish debutantes abducts him, their scheme ruins everything! Fuming and tied to a chair, Holt overhears that one of them is an heiress. Perhaps he isn’t above a little kidnapping either.
Yet, when the heiress runs away from her own wedding and straight into his waiting carriage, Holt finds himself on an adventure he’ll never forget, falling in love with a woman worth more than any treasure. But will Winn ever believe his heart only desires her . . . and not her fortune?

I love runaway brides! Especially when the bride is a much-maligned plump, freckled heroine who is determined not to marry without love. (The cover is rather misleading on the plump or freckled part, but gorgeous nonetheless.) Winnie has game: she’s plucky, she’s resourceful, and she’s just good people. Something would go wrong on her adventure to get away from the most boring awful fiance ever, and she’d press on, make do, or leave the hero marveling at her ingenuity.

Asher, though, was swoon-worthy. A bit of a scoundrel with a heart of gold--who is saddled with a father who must have been the lovechild of the Marquess de Sade and the Prince Regent, what with his tendencies to torture his son with his abominable behavior and fiscally prolifigate ways. Honestly no good deed goes unpunished for him. He plans to return the runaway bride to her father, but soon finds himself escorting her to her aunt’s house and having to redirect her father where to find them.

The author stops at nothing to remove all possible easy outcomes for either of these characters to arrive at her aunt’s in one piece. However, all the trying moments--losing the dress off one’s back, et al--bring the hero and heroine closer together. In less than two days, Asher knows he wants to be with her forever--but how can he possibly ever convince her he is not after her for her money when he a) doesn’t have any money himself, b) his father is working hard to get them married so he can get the money, and c) Asher promised to return her to her father for a small finder’s fee that he plans on using to find his own fortune?

There are secondary characters that show up at the best times--and there are secondary characters I hope to see getting their own happy ending soon. The love scenes sizzle; and the romance is worthy of Masterpiece. Oh, and there is a secondary romance--a second chance one--that is just wonderful. If you are looking for happy books to help you during the Social Distancing Period, this book is perfect. The coronavirus isn’t mentioned once; and the fever you get from Asher’s kisses and smouldering looks are not contagious.