Review, Q&A, and Giveaway - - Between Love and Honor 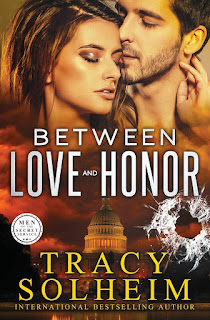 The Secret Service’s number one cyber asset, Special Agent Ben Segar, has a reputation for playing it straight... until a top-secret assignment has him cozying up to an enigmatic beauty from his past – his runaway prom date. Now, he’s willing to break a few rules to even the score, including unmasking a potential traitor, which would make his revenge even sweeter.Photographer Quinn Darby was born into the spy game. When her life is threatened, she turns to the one man she knows she can trust, but Ben is no longer the mild-mannered lab partner she once loved. Instead, he’s a full-grown, alpha-man whose appeal is even more irresistible. She’s vowed to never again deceive him, but to protect him, she must keep her double life a secret.Soon, Quinn and Ben are embroiled in a cat-and-mouse game with the enemy – and each other. As the case intensifies, so does the heat between them. Will the greatest casualties be their hearts?

Between Love and Honor is filled with the sensual chemistry, thought-provoking intrigue, and heart-stopping action that readers have come to expect from Solheim's Men of the Secret Service series. I've read it twice and, even knowing how it would all end the second time around, I still couldn't put it down until I reached the conclusion. I love when an author, especially one writing romantic suspense, is able to surprise me. The twists and turns expertly woven into this story kept me on my toes and trying to guess what would happen next until the very end.

One of the facets I've most enjoyed about this series are the complex and fully dimensional characters Solheim brings to life on the pages of these books. I love the friendship among Adam, Griff, and Ben and the sense of family that extends to the women in their lives. The vibrantly depicted secondary characters, both good and evil, enrich the story and I'm hoping readers will see more of some of them in future books. Several characters from the first two books have significant roles in this third story but it never feels as if they are trying to steal the spotlight from Ben and Quinn.

Ben and Quinn are clearly the heart of this story and I was in their corner from the get-go though it did take me a while to decide whether or not I fully trusted Quinn not to hurt him again. Second chances are my jam and the circumstances surrounding both Quinn's abrupt disappearance from Ben's life when they were teens and her equally abrupt reappearance, along with the secrets both are keeping, only upped the ante. I love that they meet again as equals, even if they don't immediately realize that. I love that each of them is determined to protect the other, even when their trust is still in question. I love their intelligence, honor, and bravery, but also their vulnerability. And, boy howdy, do I love their set-the-sheets-on-fire chemistry. They're my favorite couple from the series and I couldn't get enough of them.

Between Love and Honor has my enthusiastic recommendation. It can be read as a standalone but, as the main characters from the first two books figure prominently in this one as well, I'm glad I read the three books in order.

Thanks for hosting me, PJ. I always love hanging out with your readers. Everyone here is so welcoming and enthusiastic about the romance genre.

Between Love and Honor is the third book in your Men of the Secret Service series. What would you like readers to know about this series?

I’d like readers to know they won’t find any politics between the covers!! Our society is quite polarized right now, and people read to escape. Some see a picture of the White House or the Capitol on the front, and they might shy away from this series. Nothing could be further from the truth. This series is about an unbreakable bond of brotherhood between three West Point classmates who, after serving in the Army, now work for the U. S. Secret Service. The trio of special agents, dubbed the Heartthrob, the Brain, and the Enforcer, are devoted to their demanding jobs, thriving on the daily pressure and adrenaline. When each of them meets the one woman he can’t live without, their lives take on a whole new dimension.

I love second chance romances. Add in a revenge twist and it’s even more intriguing. What is it about these tropes that inspire you as a writer?

I think everyone can envision a situation in their life where they’d like a “do-over.” Especially in a relationship. We often imagine in our head how it will play out and the result we want—especially if we want revenge! But as a writer, there are so many different directions we can go with these scenarios. In this case, I had a geeky guy who was stood up at his senior prom by the hottest girl in school. Living in a small town meant it was hard for him to outrun the embarrassment. So when I bring them face-to-face again, revenge is one of the first things on Ben’s mind. But he’s never met puzzle he couldn’t solve and that suddenly becomes his main focus. That, and the lingering attraction he feels for Quinn, make him want to uncover all her secrets. Unfortunately, Quinn spends her entire life spinning secrets. She’s very good at it.  Readers know the trope well, and they are confident they’ll get their HEA, but it’s fun to lead the characters through an intricate dance before they get their second chance.

How would Quinn and Ben introduce themselves to readers who have yet to meet them?

Ben is the Brain of the trio, with a big heart and a love for sailing. He’s also a bit of a Boy Scout, loyal to his two buddies he thinks of as brothers. And he is always prepared. Except when he unexpectedly crosses paths with Quinn once again. That throws him off his axis. And he doesn’t like not being able to know the answer before everyone else.

Quinn can only be described as elusive. She’s confident, self-sufficient, and used to being a one-woman-show--right up until she sees what she has been missing all these years. Quinn has a soft heart, too. She’s just had to keep it locked up for her own survival. She was also the most difficult character I have ever written. It took several tries to make her likeable!

This book has a great balance of action, suspense, and romance. What was your favorite scene to write in the book? Which was most difficult?

One of my favorite scenes is when Ben takes Quinn to his sister’s restaurant. There’s a fun interaction with his nutty family members. The reader gets to see how much his family means to him and why keeping his alter-ego a secret creates such a strain on him. Quinn, on the other hand, gets a glimpse of what her life might have been had she stuck around. The scene is both funny and laced with emotion.
The hardest scene to write—and get right—I can’t talk about because it will reveal too many spoilers!

There are several intriguing secondary characters in this series. Will you be returning to Washington, D.C. for any future books?

I’d like to, at some point. Agent Groesch needs her HEA after all. There’s also the Secretary of Homeland to consider. There are also some additional fun facts about the White House I’d love to share with readers, not to mention taking a peek at the Vice President’s residence. Both buildings transcend their residents and are more character than setting.

All three books in this series have kept me glued to the pages from beginning to end. To what author do you turn when you’re in the mood for edge-of-your-seat, action-filled romance?

My all-time favorite action-filled romance is For the Love of Pete, by Julia Harper, aka Elizabeth Hoyt. It was funny, sexy, and very suspenseful. I love a good Julie Garwood book, as well.

I’m headed back to the gridiron for the near future, finishing up book one in a series I’d started before the Men of the Secret Service books. This one focuses on a new football team in Milwaukee but will feature some familiar faces from the Baltimore Blaze. I’ve also got a seasoned romance trilogy flushed out that I’d love to write. If only I wrote as fast as the voices in my head!

Thanks for visiting with me, Tracy. Is there anything you’d like to add? Would you like to ask our readers a question today?

Thanks for inviting me, PJ and thanks to all the readers for stopping by.

The second chances trope is one of my favorites to read. I’m curious, readers, what are some of your favorite tropes? Tell me, and PJ will randomly select one person to receive this fun prize of a signed copy of Between Love and Honor and a heart shaped key chain from Brighton. (US only, please.) 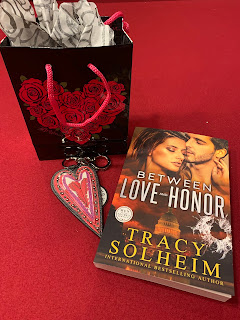