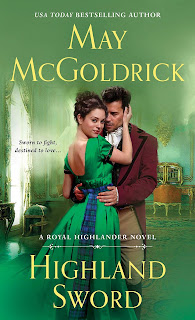 A VOW FOR VENGEANCE
Fleeing to the Highlands after her father’s murder, fiery Morrigan Drummond has a score to settle with Sir Rupert Burney, the English spymaster responsible for his death. Trained to fight alongside the other rebels determined to break Britain’s hold on Scotland, she swears to avenge her father’s death—until a chance encounter with a barrister as proud and principled as she is presents her with a hard choice…and a bittersweet temptation.
A PLEA FOR PASSION
Aidan Grant has never encountered another woman like dangerous beauty Morrigan—and he has the bruises to prove it. Yet she could be the key to defending two innocent men, as well as striking a death blow to the reprehensible Burney. Convincing Morrigan to help him will take time, but Aidan is willing to wait if it means victory over corrupt government forces and freedom for his people…and Morrigan’s hand in marriage. Can two warriors committed to a cause stand down long enough to open their hearts to a love fierce enough to last…forever?

Highland Sword brings (husband and wife writing team) May McGoldrick's Royal Highlander trilogy to a close with another satisfying story set amidst the events of the Radical War of 1820. One of the things I most enjoy about a McGoldrick novel is the rich, well-researched historical detail. That, combined with their storytelling skill, brings characters and events to life, immersing me fully into time and place. Had they been my college professors, I would have been much more excited about learning history!

While Highland Sword is a romance, it leans heavily on the historical aspects of the story and there's no doubt that Morrigan is the central character. She's a warrior, holding herself apart from others, intent on training with the men of the Mackintosh clan, honing her skills to a deadly edge, foiling her opponents, and taking her revenge. As her story unfolds, and her character evolves, we learn the heartbreaking reason for that determination. I appreciate the way the author handles the situation as Morrigan faces her past, regains control, and finally begins to move forward.

I adore Aidan. He's a wonderful match for Morrigan, with a calm, measured personality that balances her fiery temper. I love his honor, his humor, how he not only accepts the warrior within Morrigan but celebrates it. I love how determined he is to put their relationship first even if that is at the expense of his career ambitions. I finished their story confident that their future would be a happy one.